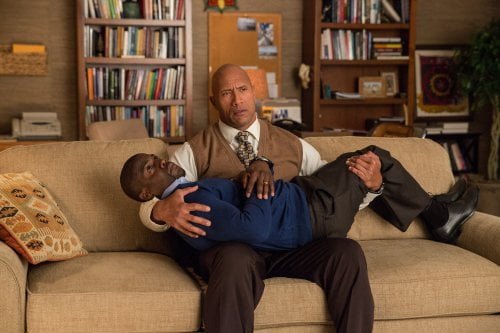 CIA agent Bob Stone (Dwayne 'The Rock' Johnson) used to be an overweight, bullied outsider who remembers his high school's star athlete, Calvin (Kevin Hart), as more of a friend than Calvin does. Meeting the night before their 20th high school reunion, Bob, now a block of muscle who goes by Stone, asks Calvin, now an accountant, to analyze some financial data, but the request leads into a dangerous maze with global security at stake in "Central Intelligence."

Early on, I suspected that this might be a comedy lite take on Fincher's "The Game," but no, cowriter (with Ike Barinholtz & David Stassen)/director Rawson Marshall Thurber (“We’re the Millers”) isn't that imaginative, instead going for an odd couple buddy (think "Twins'" Arnold Schwarzenegger and Danny DeVito) movie where Bob's sanity and true identity are kept a mystery until the end (think "The In-Laws"). Fortunately, the movie works because of Johnson's childlike, huggable lug of a CIA agent, Thurber's action choreography and lots of bananas. A flashback pre-credit sequence gives us these guys' history, Bob Weirdicht blissfully singing and dancing in the shower (Johnson's face is digitally applied to the body of dancer Sione Kelepi) only to be hoisted up and slid out onto the gymnasium floor where Calvin 'Golden Jet' Joyner is receiving his 'Student of the Year' plaque. Calvin is the only one to show sympathy, handing his letterman jacket to his naked classmate. Twenty years later, the 'most likely to succeed' is stuck in a dead end job, his former assistant promoted over him. When he tells his wife, high school sweetheart Maggie (Danielle Nicolet, TV's 'Born Again Virgin'), that his life has plummeted since high school, she's upset he fails to recognize their happiness together. She insists they see a counselor, but just as she's trying to pin him down, Calvin gets a friend request from a 'Bob Stone' asking him to meet up for drinks, a perfect delaying tactic. Calvin's floored that Stone is a much transformed Weirdicht, but Bob is even more thrilled to be hanging with his 'boy.' After Bob takes out four bullies in a bar, he takes Calvin back to Central High on his Kawasaki 800 to remind him of his glory days, but after Bob spends the night on his couch, Calvin awakens to CIA Agent Pamela Harris (Amy Ryan, "Gone Baby Gone") and her goons at his door, interrogating him for assisting a rogue agent out to sell secrets to the enemy. It's not the writing that's particularly funny, with Bob constantly asking Calvin if he's 'in' and Calvin always replying that he's 'out,' but Johnson's innocent calm amidst chaos, much of it churned up by Hart's utter panic. Johnson's costuming adds to the fun, first meeting Calvin wearing a baby blue unicorn tee, a pair of jorts and a fanny pack, later switching to a bright yellow Public Enemy tee, a man true to his own nature. For his action debut, Thurber proves adept staging various shootouts and chase scenes, an office cubicle fight with multiple moving parts a real standout. He also doesn't hit us over the head with the film's message, yet it still comes through loud and clear. "Central Intelligence" was shot in and around Boston, a real meta moment coming late in the film, the AMC Boston Common in which the screening took place appearing in the background. There are a few surprise cameos, 'Breaking Bad's' Aaron Paul appearing in flashback as Bob's former partner, Jason Bateman appearing as the adult Trevor. The best one comes last, when Bob meets up with former crush, Debbie with the two lazy eyes. "Central Intelligence" is forgettable fluff, but The Rock is damned entertaining while you're watching it. Grade: