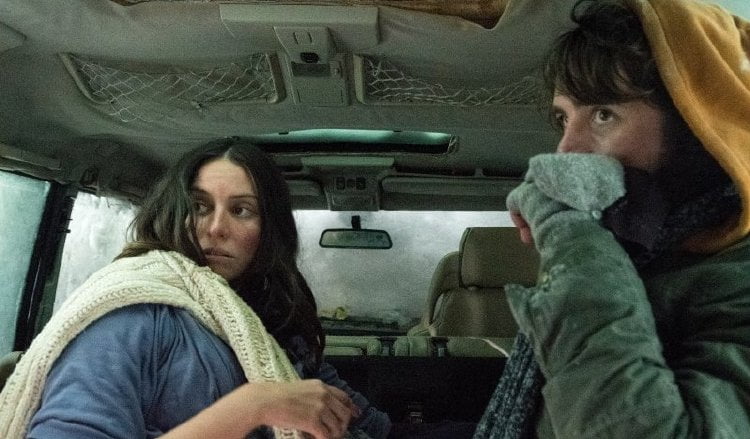 A woman, Naomi (Genesis Rodriguez), awakes in a car. The windows are covered in ice and she cannot get the door to open. She wakes her husband, Matt (Vincent Piazza), and they discover they are trapped on a frozen tundra with no way out. Their ordeal moves from a hopeful day to weeks of survival in “Centigrade.”

Cowriter (with Daley Nixon)/director Brendon Walsh (Showtime's 'Nurse Jackie') makes his feature debut with a taut domestic survival thriller billed as ‘based on a true story.’  Don’t bother looking for that, as it is really just based on a circumstance that has happened about a dozen times.  That said, Walsh and his two actors make the most out of their singular location, one which may have been easy on the budget but which surely posed technical and artistic challengers.  They’ve risen to them.

At first we wonder how long it will be before Matt snaps, his wife the type who questions everything, calls upon him constantly and is careless with precious resources.  Matt seems to continually sacrifice his own needs for Naomi, denying himself food while she takes every opportunity to consume it.  Then we learn that Naomi is eight months pregnant and our perspective shifts.  This is savvy writing, playing upon the given and take of marriage, the human defensive tactic to lay blame, which escalates an already precarious situation.  The characters and what happens to them continue to surprise us, revealing shocking secrets and exhibiting the grim foresight to plan for some radical survival possibilities.  Let’s just say that Walsh employs the ick factor.

The director kept his actors, who dieted to lose weight as the production proceeded, within a refrigerated environment, which, combined with the cramped space must have made for a miserable shooting experience.  The claustrophobia does indeed begin to get to us, butcinematographer Seamus Tierney ("In a World...") manages to keep the visuals interesting, occasionally breaking out of the car’s darkened interior to give us an aerial view of just how bad this couple’s predicament is.

The concept isn’t new and one wonders just why a woman so close to birth would travel to a foreign land during its harsh weather season for a book tour which surely could have been postponed.  But “Centigrade” is a well made genre piece, a two-hander in closed quarters that keeps us in its grip from start to finish.

A woman, Naomi (Genesis Rodriguez), awakes in a car. The windows are covered in ice and she cannot get the door to open. She wakes her husband, Matt (Vincent Piazza), and they discover they are trapped in a frozen car in the middle of the Arctic tundra and there is no way out. Their ordeal moves from one of fleeting hope to weeks of harsh survival in “Centigrade.”

OK, I admit it, I have claustrophobia and am not a big fan of being trapped in a small space, so a movie about two people trapped in a small place seemed, to me, a big pass. But, I put the fear aside and gave “Centigrade” a go. I am glad I did.

This two-hander, directed by tyro feature director Brendan Walsh is both a case study in economic filmmaking and a tension-filled drama that gets the viewer involved with its two characters and their frightening, frigid plight. It helps that there is convincing woman/man relationship complicated by the fact that she is very pregnant.

The intimacy of the locale and the dangers the couple must face – thirst, hunger and numbing cold – become their world and one with scant hope of rescue. How Naomi and Matt cope with the ordeal, like real people, keeps you engrossed, and guessing, what will happen. It goes beyond death versus survival and you really root for the latter, and the stalwart couple.