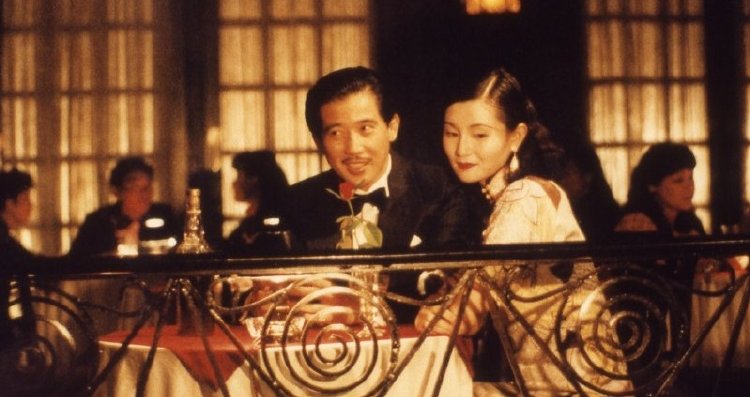 The 'Greta Garbo of China,’ Ruan Ling-yu ("In the Mood for Love's" Maggie Cheung) was the country’s first superstar, making thirty silent films, most at Shanghai’s Lianhua Film Company, beginning at the age of sixteen.  Starting off in ‘wallflower roles,’ Ruan played prostitutes and peasants, fighting for a role of 1933’s “Three Modern Women” whose director believed she was not right for, until she transformed right in front of him.  But Ruan’s complicated love life was catnip for the Shanghai tabloids which tormented her until she committed suicide at the age of 24, after she’d taken her rightful place on Chinese film history’s “Center Stage.”

Hong Kong director Stanley Kwan’s 1991 film has been rereleased in a digital 4K restoration from Film Movement and it is cause for celebration, not just for the restoration but for the reminder about this incredibly imaginative biopic.  Featuring a deft, canny and moving performance by Maggie Cheung, Kwan’s bold approach (screenplay Yau Dai An Ping) is something like analyzing a film in real time, his intertwining of feature scenes, interviews with actors and filmmakers from both his own film and those of Ling-yu’s plus clips from what remains of her work, enriching the experience.

We may, for example, see Cheung as Ruan going through odd motions, only to see them repeated in a silent film clip and realize the actress was playing the actress blocking out a scene.  Each clip is titled with the year of its release, the film’s title and on most, unfortunately, ‘Film no longer available’ (i.e., lost).  The young actress’s life was divided between the Shanghai studio, where she works for a series of directors, and her home life with her mother He Aying (Hsiao Hsiang), who cares for Ruan’s adopted daughter Hsiao, and the gambling lover, Chang Ta-Min (Lawrence Ng, "To Be Number One"), whose financial and emotional grip she could never escape despite his desire for ‘a free and easy life.’

Director Sun (Sun Dongguang) is prescient declaring Ruan will be China’s first superstar based on her work in his 1930 “Dream of the Ancient Capitol.”  Shortly thereafter, we will see her frequent costar, Lily Li, in present day recalling Ruan in her coffin (she’s played in Kwan’s film by "Days of Being Wild’s” Carina Lau).  Ruan’s life begins to spin out of control when its public and private aspects intersect when Lianhua Film Company’s married Tang Chi-Shan (Han Chin) takes an interest in her.  Despite the fact that he already has a mistress, Tang moves Ruan, her mother and daughter into his house while also negotiating a type of ‘alimony’ contract with Ta-Min (the real Ta-Min, we will learn here, went on to star as himself in ‘Who’s to Blame?’ after Ruan’s death, still exploiting his former lover).

Up until this point, cinematographer Hang-Sang Poon has cast interiors in deep shadow, but Chi-Shan’s home is full of light, perhaps an allusion to the spotlight which will now be thrown on Ruan’s personal life or merely a reflection of the man’s wealth.  The contrast is immediate when Ruan visits her old lover, who keeps tormenting with declarations of love mixed with demands for money, living in a decrepit apartment.  Tabloid press is everywhere around the two very different homes.  Ruan meets with her latest director, Tsai Chu-sheng (Tony Ka Fai Leung, "The Lover" (not Maggie's "In the Mood for Love" costar, Tony Chiu-Wai Leung)), perhaps her true love, and asks if he will take her away, but the man will not commit, instead pushing her into one of her last great performances (which ends with Kwan himself noting a missed direction in the scene of Tsai’s direction).  The real man is seen in a recent interview lamenting her death due to ‘murder by society and tabloids.’  It’s hard not to think of Princess Diana and the many men who failed her.

We see Cheung heavily made up in white face paint and stockings for the black and white screen, the actress playing the actress always seeming to present herself, her face carefully composed.  The contrast of her portrayal with her interview pieces is remarkable, the real life Cheung much more animated and less controlled until her Ruan attends a company party with Chi-San on the night before her death and, slightly drunk, kisses each of her directors on the cheeks, announcing she’s taken the most time with Tsai because ‘he’s the shyest.’  A sensuous rumba follows.  The following scene is a reversal as her directors each say goodbye as she lies in state (the film’s only flaw is its indulgence in goodbyes, the ending’s length undercutting its impact).

The blu-ray doesn’t have a lot in the way of extras, but what it does have is very worthwhile, a 16 page booklet including an essay by Aliza Ma and an interview with director Stanley Kwan, who has, in a way, embedded all the extras one would wish for right within in his film.

Ruan Lingyun, by the age of just 24, was the queen of 1930s Chinese silent cinema. She also committed suicide at that tender age. In 1991, Hong director Stanley Kwan, with his ingénue Maggie Cheung, puts forth a masterpiece about that brief, meteoric life on “Center Stage.”

How did I not know about this brilliant collaboration between director Kwan, actor Cheung and the silent star so long passed from our existence? Well, now I know and what I found is a gem in storytelling – on at least four different levels.

Ostensibly, “Center Stage” is a biopic about Ruan Lingyun and her all too brief career in film. But, it also delves into the young woman’s life, building a picture of that brief rise to fame through archival material. And, Kwan and Cheung, with a little help from the talented cast, recreate portions of Ruan’s films (most are gone forever) and give us a stylish (and accurate in feel) modern look and interpretation of those films, delving into her amours and what drove her, finally, to take her own life. Also, Kwan brings us, documentary style, the making of a film within the film.

When you add up all of these elements of style, the sum is greater than the parts. Any one of the four different pieces of “Center Stage” could have been a standalone. I am shocked that no resourceful docu-maker has taken on Ruan Lingyun as a subject I now want to know more about.