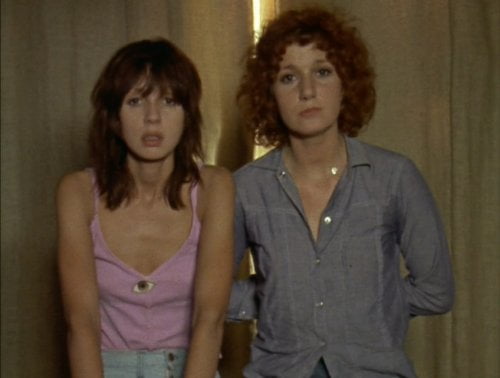 One day, as librarian Julie (Dominique Labourier, "Murderous Maids") sits in a park reading a book on magic, a flamboyantly dressed stranger runs by, shedding her sunglasses and scarf in her wake. Julie follows Celine (Juliet Berto), at first trying to get her attention, but once gotten, clandestinely. It's the beginning of a game and a mystery that continue even as "Celine and Julie Go Boating."

This 1974 film is director Jacques Rivette's ("The Duchess of Langeais") playful consideration on the art of cinema refracted through the lens of Lewis Carroll. It is one of the seminal films of the French New Wave and is being released in a new print from New Yorker Films. The film is lengthy at 193 minutes, but we follow it down the rabbit hole just as Julie follows Celine into her adventure. The two women flirt with each other over the course of a day until Julie finds Celine sitting on her stairs with a skinned knee. This brings them together, into Julie's apartment, and they begin to write their script, play each other's roles and watch their own movie. 8x10 photos in Julie's apartment lead them to various adventures, with Celine meeting an old childhood boyfriend of Julie's, Guilou (Philippe Clévenot, "Place Vendôme"), pretending to be Julie and thwarting his romantic plans. Julie, meanwhile, takes on Celine's staged magic show and deep sixes her tour audition by attacking its producers as perverts. The real fun begins when Julie returns to an old house and leaves with no recollection of what happened. Flashes of memory appear and the two take turns playing nurse to Madlyn (Nathalie Asnar), the little girl of the widowed Olivier (producer Barbet Schroeder, "The Duchess of Langeais"). Camille (Bulle Ogier, "Venus Beauty Institute") and Sophie (Marie-France Pisier, "Cousin, Cousine") also live in the house, both desire Olivier and one will try to murder the child to get him. Celine and Julie use the hard candies they find in their mouths outside to 'replay' what occurred inside. That last is another of the many references to "Alice in Wonderland," and, perhaps, to dropping acid. "Celine and Julie Go Boating" is certainly not a movie for those who adhere to linear storytelling. It is a flight of imagination, a rejection of the responsibilities of adulthood. Dominique Labourier is the very essence of spontaneity with her exaggerated physical reactions and vocal 'woop's, a delight to watch in an engaging, complicit performance. Berto is more the femme fatale. Within the strange house with its time-looped happenings, Pisier projects warmth while Ogier swans about with the heightened emotions of a silent film star, performances as misdirecting as a magician's moves. Over the years, Rivette has continued to play with time and story ("The History of Marie and Julien") and theater ("Va Savoir") and its performers ("Around a Small Mountain"), but "Celine and Julie Go Boating" is his most delightful work. It is a defining work of its time.