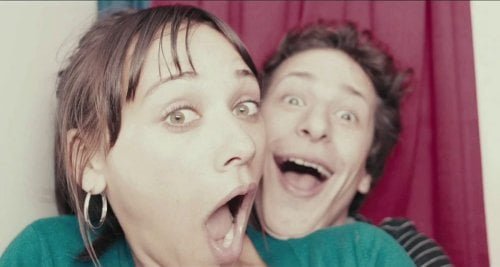 They've been best friends since they were kids, they bounce everything off one another and they share the same bizarre sense of humor, so when they got married, everyone expected it would be "Celeste and Jesse Forever."

Rashida Jones (TV's 'Parks and Recreation') and her buddy Will McCormack (TV's 'In Plain Sight') have written a different kind of romantic comedy and although director Lee Toland Krieger ("The Vicious Kind") occasionally lets it stray off the beaten path, for good and ill, it certainly marches to its own drummer. Rashida Jones has written a woman we rarely see on screens, a complex one whose actions are often cringe-worthy, one whose assumptions about her ex gradually reveal her own worst tendencies. In fact, the film begins with the couple separated, although it takes a while for this to sink in. Celeste (Rashida Jones, TV's 'Parks and Recreation') has a high flying career as a trend analyst, running her own company with her (requisite) gay friend Scott (Elijah Wood, "The Lord of the Rings"). Jesse (Andy Samberg, "That's My Boy") is an artist with no sales and an irresponsible attitude towards deadlines 'temporarily' living in her guest house. The two engage in a virtual hug every time she sees him walking up or down her drive, one of their many insider rituals. But when they meet Beth (Ari Graynor, "The Sitter") and Tucker (Eric Christian Olsen, 2011's "The Thing," TV's 'NCIS: Los Angeles') for dinner and discuss the menu using fake German accents, Beth flips out, unable to process their closeness as a separated couple. Things change dramatically when Jesse runs into Veronica (Rebecca Dayan, "Limitless"), a sexy Belgian dancer he dated once but never told Celeste about. Veronica got pregnant that night and Jesse decides to see it through. Celeste is thrown into a tailspin and tries to climb out with retaliation dating. Then she makes a huge error on a logo for a teen pop client, Riley (Emma Roberts, "Scream 4"), whom she'd dismissed as vapid. Celeste must recognize an unattractive superiority complex just as her own ego's taking a beating. And that Jones does all this while remaining thoroughly sympathetic, even charming, is a testament to her capabilities as an actress. This is one of the most insightful performances to grace a comedy. Jones and Samberg also share the type of chemistry born of soul mates. We grieve for their relationship even as we understand what hamstrings it. Support is solid, especially from Chris Messina ("Ruby Sparks") as Paul, the man so unlike Jesse who just might be right for Celeste. Jones's cowriter McCormack is hugely amusing as Jesse's best friend Skillz and Graynor is always a comedic asset, here as Celeste's bestie. Rafi Gavron ("Nick and Norah's Infinite Playlist") nails the male model whose rare lack of ego allows him to fall for an interesting older woman. Riley is a great role for Roberts, who plays smarter than she looks, but her character is the filmmakers' biggest fumble as her ensuing tight friendship with Celeste is never really credible. The film looks bright and airy, from L.A. to Rhode Island (cinematography by David Lanzenberg, production design by 'Parks and Recs'' Ian Phillips). "Celeste and Jesse" is an astute analysis of the emotions that come into play when a couple realizes they are better off as best friends and how even that relationship must shift to accommodate new romantic partners. As survivors of same themselves, Jones and McCormack make a formidable screenwriting duo.

Celeste (Rashida Jones) and Jessie (Andy Samberg) are the happiest divorced couple on earth. Best friends since childhood, they married and divorced but remain, still, best friends. They spend their free time together and Jessie lives in the art studio attached to Celeste’s house. Their friends urge them to move on and date others but the ex-couple know they will be “Celeste and Jesse Forever.” This is the baby of its star-writer-producer Rashida Jones and she is dedicated to her debut work. It obviously touches a chord in her but not in me. For one thing, Celeste and Jesse, as the happily divorced couple, do not ring real. They are such good buddies that they exhibit their private jokes – like masturbating, together, a little tube of lip gloss or a baby carrot – when with friends Beth (Ari Graynor) and Tucker (Eric Christian Olsen). Their behavior and spending all their time together, not seeing others, is just plain weird to their friends. One day, in a bookshop, they run into a woman that Jesse dated briefly some months ago, Veronica (Rebecca Dayan). You can see that there is still something between them and, soon, Jesse announces that he is not only dating Veronica, she is having his baby. It seems that there was more than dating when they were together tree months before. The rest of the film has Celeste accepting the changes in her life (though not really) and Jesse wrestling with his pending fatherhood. I could not empayhize, or even sympathize, with either character I think that femme audiences will be attracted to “C&J Forever.” Rashida Jones is a very likable personality and, with her career ambitions (she is a “trend forecaster”), nice wardrobe and positive attitude, will appeal to women. The story, though, does not cross the gender gap, making this a film NOT for date night.