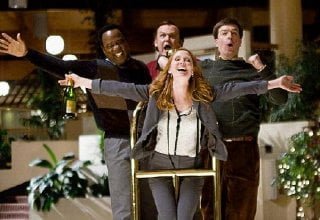 Tim Lippe (Ed Helms) expected to go places far away from his sleepy Wisconsin town of Brown Valley. He did not go places and never took a step from his birthplace. When the top salesman at the insurance agency Tim works for suddenly dies, he is selected by his boss (Stephen Root) to attend the “big” insurance convention in far off Iowa. His assignment: win the coveted Two-Diamond Award for the third straight year. However, this fish out of water is going to find out what life is all about in the big city of “Cedar Rapids.”

Thirtysomething Brownstar Insurance salesman Tim Lippe (Ed Helms, "The Hangover") is dazzled by the latest commercial pitched by slick coworker Roger Lemke (Thomas Lennon, "Le Divorce") touting the company's prestigious Two Diamonds award, then is shocked to hear of Roger's accidental - and scandalous - death the next day. When Tim's boss Bill Krogstad (Stephen Root, "Office Space") informs him that it is now up to him to deliver the company pitch at the annual ASMI convention, Tim is overwhelmed to be leaving his small home town for the first time to head for the big city, "Cedar Rapids." Cross the old fashioned values of Frank Capra with the raunch of Judd Apatow and you just might come up with something like "Cedar Rapids." Written by Phil Johnston, this story of a naïve midwesterner who has a crash course in the ways of the world while maintaining his inherent goodness is never condescending. Director Miguel Arteta ("Chuck & Buck," "Youth in Revolt") never uses his characters as objects of derision - instead while Tim's fellow conventioneers are hedonists in comparison, they form a protective shield around him even as they lead him down the garden path. On its surface, "Cedar Rapids" may be the best film about team building and the value of friendships in the business world ever made. Lippe may still dress like a seventh grader, but wisely, the filmmaker's have not cast him as a forty-year-old virgin. But he thinks his once a week tumble with Macy Vanderhei (Sigourney Weaver), his former seventh grade teacher, means more than she. After gifting her with a stuffed scarlet tanager, which symbolizes the story's theme of leaving the nest, and a promise ring, Tim's off to the airport for his first plane ride. His first rental car is bright red, a shocking change from Brown Valley palettes, and the Royal Cedar Suites hotel, with a pool in the atrium, is beyond his wildest imaginings. The shocks keep coming when he learns his roommate, Ronald Wilkes (Isiah Whitlock Jr., HBO's 'The Wire,' AMC's 'Rubicon'), is African American and the extra guy bunking in to save costs is Dean Ziegler (John C. Reilly, "Chicago," "Cyrus"), the one man his boss has warned him to stay away from at all costs. 'Deanzie's' language may as well be foreign - he's as gloriously foul as "In the Loop's" Malcolm Tucker sans the aggression. Women in Cedar Rapids are predators. Tim meets Bree (Alia Shawkat, TV's 'Arrested Development,' "Amreeka") outside the hotel, where she greets each man by bumming 'a heater.' She's perplexed, but interested, when he gives her a butterscotch instead. In the gym, he's teased mercilessly by Joan Ostrowski-Fox (Anne Heche, TV's 'Men in Trees,' HBO's 'Hung'), who accuses him of checking her out. When the roomies go for drinks, Tim's talked into indulging and orders a cream sherry, a move which impresses the hell out of Deanzie for its crazy individuality, but when 'the fox' shows up, her butt grabbing is too much for Lippe ('I'm engaged to be engaged!'). Tim begins the next day in the good graces of Orin Helgesson (Kurtwood Smith, "Robocop"), the ASMI president who will choose one of fifty agencies for the Two Diamond, but after a day of bonding set off by a scavenger hunt, Tim ends up drunk in the pool with Deanzie and a topless fox and Orin, who considers Christian values a component of a Diamond winner, is awakened by the noise. Tim has a further twenty-four hours to learn about the dark side of human nature and just what he is made of. Ed Helms has quickly carved a niche for himself as a sweet straight arrow, but Tim Lippe is a different creation from Andy Bernard and Stu Price. Lippe has an almost complete lack of self awareness. He believes in certain things and acts accordingly, without awkwardness. His sincerity is on display through a series of male hugs - not noticing Roger's flinch when he congratulates him, somewhat discomfited by a nude one offered by Orin in the male locker, blindly accepting his counterparts' good will or empty bonhomie. Helms also gets to trot out his strong, simple singing voice as an impromptu talent competitor whose earnestness in song choice wins over the crowd. His supporting costars create a nicely balanced trio for him to bounce off of. Whitlock is friendly and unassuming (and probably gay), a comfortable welcome after Tim gets past the color of his skin. Reilly is unrepentingly profane, but wins Tim over with his disdain for bs and loyalty. Heche is a workable mixture of maternal and seductive, the former overcoming the latter when faced with Tim's ethos. Alia Shawkat does a great job finding Tim utterly foreign then allowing her curiosity to let her be won over. Smith and Root are a bit cartoonish as the unethical businessman. Watch for Mike O'Malley, Rob Corddry and Seth Morris in smaller roles. The production captures quintessential small town American in Brown Valley, Wisconsin (the film was shot in Michigan) using rather dull natural colors. A view of the Quaker Oats building establishes Cedar Rapids. Brown Valley's exotic cuisine is represented by a photo-cake contrasted with the urban idea of a Japanese restaurant in a Cedar Rapids mall. The film is bookended with insurance commercials, the first false advertising, the second born of Lippe's ideals.

Following up on the raunchy and hilarious “The Hangover,” normally supporting actor Ed Helms takes the lead in a comedy that shares the ribald humor of the 2009 comedy hit, but also has its own warmth, sweetness and naïveté, mainly because of Helms. Tim is as mid-western white bread as they come and he is awed by air travel (first time) and the opulence of his luxury hotel (also first time) and exotic food, like Buffalo wings. He is shocked, though when he learns that he is sharing a suite with an Afro American man. Ronald Wilkes (Isaiah Whitlock Jr.) and the man Tim’s boss warned him away from, the notorious Dean Ziegler (a scene stealing John C. Reilly). More shocking still is Nebraska insurance agent, Joan Ostrowski-Fox (Anne Heche), a married mother of three whose free spirit who insists that what happens in Cedar Rapids stays in Cedar Rapids. The humor slowly and sweetly unfolds as Tim leaves the nest – both Brown Valley and the arms of Millie Vanderhei (Sigourney Weaver), his 7th grade teacher to whom he is “pre-engaged” – but he goes kicking and screaming. His wide-eyed wonder at the big city and his party-down colleagues draws Tim into life and circumstance previously unknown. He, naively of course, is approached by a hooker working the hotel, Bree (Alia Shawkat), and thinks she is another insurance agent who is verrry friendly. He has his first brush with booze and drugs, gets the crapped beaten out of him, and becomes a changed man. It is all, in the end, good, warm-hearted fun with a cast that breathes life into their characters. The contrast between Tim’s small town life and the near debauchery of big town Cedar Rapids makes this a real stranger in a strange land yarn. Director Miguel Arteta deftly handles the script, by Phil Johnson, which creates believable characters that are made even more real by the fine and funny cast. The movie captures small town Mid-West America and, through Tim’s eyes, the glamour and bright lights of the big city.