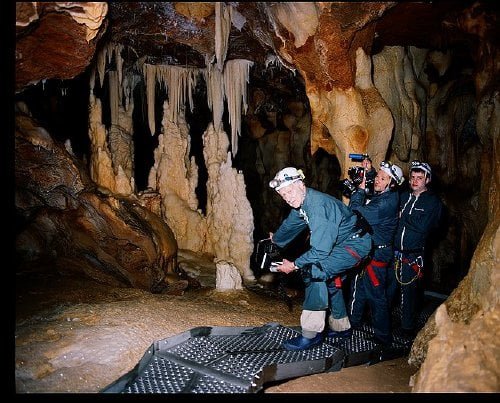 In 1994, a group of scientists made a profound discovery in the south of France - Chauvet Cave had been sealed off for 20,000 years following a rock slide, pristinely preserving its contents. The government quickly sealed the opening with a heavy, locked steel door, allowing limited access to the unspoiled environment to small teams of archaeologists, Paleontologists, anthropologists, zoologists, geologists and art historians for a few hours a day (dictated by high carbon dioxide and radon levels) for a few weeks twice a year. Then singular filmmaker Werner Herzog ("Aguirre, the Wrath of God," "Encounters at the End of the World") offered his services to the government of France for 1 Euro and he and a small crew adapted 3D cameras to show the world the "Cave of Forgotten Dreams in 3D."

Director Werner Herzog has always been fascinated by man's relationship to nature in both his feature ("Fitzcarraldo") and documentary ("La Soufrière") films, the more extreme the situation, the more Herzogian. This opportunity to record the oldest Paleolithic cave drawings, 32,000 years old, keeping company with the remains of wooly mammoths and ice age lions amongst the stalactites and stalagmites, couldn't have been given to a more appropriate artist. Until one sees these amazing drawings, one cannot imagine how utterly right Herzog was to employ 3D technology to present them, as the artists who created them were very sophisticated, using the rippling surfaces of the interior, their light and shadow, to animate their work. These animals appear to be moving, and they are beautifully rendered, many with multiple legs, blurred to trick the eye. At one point, someone speculates their placement may also have been chosen to take advantage of firelight, which would have made the images dance even more. (For the first time Herzog uses a film clip - of Fred Astaire's shadow dancing against a white wall in "Swing Time" - to illustrate the point.) The film's opening is hugely reminiscent of Herzog's "Nosferatu." With an eerie choir on the soundtrack, Herzog shows off his 3D camera by running up a row of a vineyard. Later curving roads give way to paths carved out of mountains alongside rushing water. Bones are entombed inside the cave. This may be France but clearly we are in Herzog territory. We see Herzog's team entering the cave, the cramped quarters, the conditions and rules (the filmmakers cannot stray from metal footpaths, etc.), but his first footage is with a non-commercial camera - this is just a dry run. Then he spends time speaking with the experts, encompassing a wide range of angles. We learn that the cave, about the size of a football field, has been laser mapped. There has been a separation of the cave surfaces, a sort of reverse 3D, which shows the bear claw scrapings on the walls, the original drawings and those that followed. The movement of one ancient ancestor can be tracked because of a crooked finger found on the palm prints he has decorated the walls with. On the outside of the cave, Master Perfumer Maurice Maurin explains how he sniffs for evidence of more hidden enclosures. Herzog, whose narrative voice has seemingly taken on a life all its own of late (just type 'Werner Herzog reads' on youtube for various children's literature parodies), asks interesting questions and, as always, evidences a quirky sense of humor, but sometimes overreaches in his own poetic speculations (just why is he so sure these drawings reflect dreams rather than reality?). And, truth be told, the film feels like it has been padded to achieve feature length, with side trips to Germany and museums and much repetition of the cave drawings themselves. But still, intrigued by the partial view of the only depiction of a human figure, Herzog devises yet another piece of equipment to snake his camera out and show us what not even the scientists can see. With "Cave of Forgotten Dreams," Herzog has made a case for 3D outside the realm of popcorn entertainment.