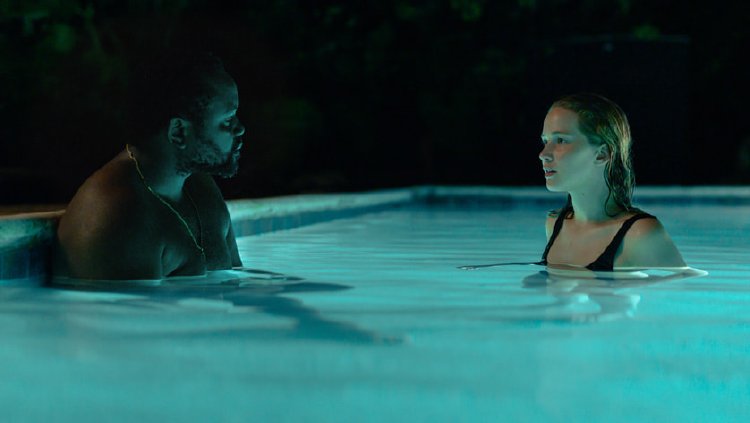 Lynsey (Jennifer Lawrence) won’t even respond verbally when caregiver Sharon (Jayne Houdyshell, "The Humans") picks her up, loading her wheelchair into her car.  As she regains strength, running and beginning to drive again, we’ll have observed a closed-off veteran of the war in Afghanistan who inexplicably seems to want nothing more than to redeploy.  It will be an unlikely friendship with an auto repair shop owner, James (Brian Tyree Henry), in her home town of New Orleans that will reveal the true cause of trauma in “Causeway.”

Don’t let the subject matter turn you away from this affecting little indie.  While we’ve seen many movies about veterans struggling with trauma and readjusting to life stateside, this quiet, moving film is all about the performances of its two stars in their tentative pas de deux.

In its initial scenes, we’ll see Lynsey needing Sharon’s help with every little thing, her inability to properly grasp anything requiring assistance with such mundane tasks as tooth brushing, bathing and going to the bathroom.  She has panic attacks in the middle of the night, Sharon rushing to her side.  But once mobile and communicative, Lynsey projects a defiant air of self reliance so strong, we can feel Sharon’s concern.

The young woman who told Sharon her mother would be picking her up at the bus station instead wheels her suitcase through the streets to a small, rundown home where she uncovers a key from its hiding spot and lets herself into an empty house.  Some time later we’ll hear ‘Lynsey?,” her mother, Gloria (Linda Emond, "Julie & Julia"), seemingly surprised to find her there.  ‘I thought you were coming on Friday.’  It rings hollow.

Lynsey may project a confident front, but we can see she’s still suffering PTSD.  She immediately gets a job cleaning pools, but panics when her truck acts up in traffic. A bad carburetor will turn into a good friend when James, instead of recoiling from the young woman who claims she doesn’t know her own phone number, probes gently.  The offer of a ride home leads to a discovery of commonalities, like the fact that Lynsey played high school basketball against James’s sister, and soon the two are hanging out, relaxed in each other’s company.  Mutual trust elicits shared pain, but not without an obstacle or two.

Director Lila Neugebauer ("The Sex Life of College Girls") contrasts the neighborhoods of those who go to war for us with those who have their pools cleaned with the small business owner’s landing somewhere in the middle.  This is the New Orleans its residents know and it provides not only character but a psychological backdrop for its central protagonists.  Writers Ottessa Moshfegh, Luke Goebel and Elizabeth Sanders build a friendship through small details, acknowledging the romantic complications inherent in a male/female friendship while sidestepping race.  Lawrence gives the kind of unshowy yet truthful performance which might fail to grab year-end attention but should.  Her Lynsey is so entombed by layers of trauma, both physical and mental, that it is like James is helping her float to the surface to break free.  Tyree Henry, who hasn’t stopped astonishing us with his range since breaking through in TV’s ‘Atlanta,’ brings a quiet compassion to James, coaxing Lynsey into the first smile we see from her, but his failure to run with her connection to his sister hints at something in his past (and explains the film’s title).  Emond conveys everything we need to know about Lynsey’s mom with a few deft strokes.  The film also stars character actor Stephen McKinley Henderson as Lynsey’s reluctant neurologist and “Greyhound’s” Will Pullen as her brother.

Lynsey (Jennifer Lawrence) is recovering from serious injuries she received, including brain damage, while deployed in Afghanistan. She is in therapy but her real goal is to get back in action and redeploy to the war zone in “Causeway.”

Tyro feature director Lila Neugebauer, with Jennifer Lawrence and Brian Tyree Henry, tells a quiet story of recovery through the eyes of Lynsey, whose life was shattered by an IED explosion. We meet the wounded veteran as she tries to rebuild herself and her life. But, it is a difficult slog as she begins the tough task of rehab, both physical and mental, with the help of her therapist, Sharon (Jayne Houdyshell).

Do not expect action, shootouts and fights. Instead, we are presented a quiet slice of life as she finds a place to live and gets a job as a swimming pool cleaner, but always with the goal of going back to Afghanistan.

Things change, in a good way, for the recovering vet when, while driving, her vehicle craps out, triggering a PTSD incident. Fortunately, the mechanic at a local garage, James (Brian Tyree Henry), seeing her trouble, gives her a ride and the seed of a friendship is planted.
Lawrence and Tyree Henry have a nice chemistry as two people who, though very different, are kindred spirits, with James helping her with recovery as he deals with the demons that lost him a leg. Their friendship has a cathartic effect for both as they know they are not alone in this world and have each other.

I cannot think of another film recently that I call just plain “nice” and “Causeway” fits that bill well. In a time when hate and greed dominate everything, I am glad to see a story that is about hope and love.