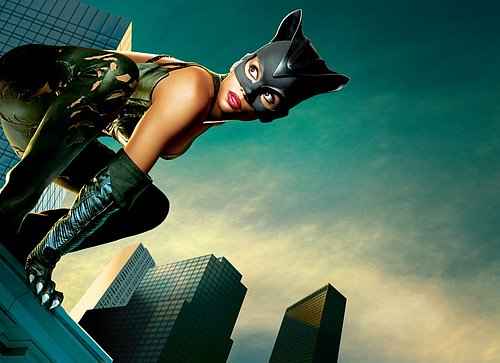 Patience Philips (Halle Berry) is a mousy, constantly apologizing graphics designer working for the prestigious Hedare Beauty Corporation. Her boss, George Hedare (Lambert Wilson), is an arrogant bully who loudly rejects Patience’s good work, even though it is exactly what he asked for, and demands she redo it by midnight. She complies and delivers but overhears some nasty, conspiratorial conversation about a dangerous new cosmetic. Her life is forfeit and she is murdered. But, a strange and mysterious cat comes to her rescue and brings her back to life – as a very different person, one out for revenge in “Catwoman.”

The only compelling reasons for me to spend my time and effort seeing “Catwoman” were that it would be appreciably short and have ample on screen time of Halle Berry wearing a skimpy leather cat suit. Well, the movie clocks in at nearly 100 minutes (not nearly short) and Halle does look fine as the sexy, mysterious vigilante. This is not enough, though, to recommend that you waste your time and money seeing something that is, basically, a rehash of the first “Spider-Man” movie. The plot is simple enough. Hedare Beauty is on the verge of announce the marketing release of a new beauty product, “Beau-Line,” a cream that will stop the advances of aging in women’s skin. George Hedare has also replaced his wife, Laurel (Sharon Stone), as the face of the company with much younger Drina (Kim Smith). When Patience drops off her redone assignment late one night she overhears the company’s head chemist threatening to expose the new product as dangerous – unless a woman keeps using the cream she will begin to look like a monster. Patience tries to get away but is pursued and killed by Hedare’s henchman. Through the magic of ancient legends and the intervention of one particular cat named Midnight, Patience is brought back to life she is no longer Patience. Instead, she is a changed woman with feline quick reflexes, incredible strength and agility and a taste for danger. She is Catwoman. As the city’s new super hero/villain sets out to take revenge on Patience’s killers, a handsome cop, Tom Lone (Benjamin Bratt), arrives on the scene and is smitten with the pretty, shy artist. He is called in to investigate a murder and learns about the sexy, feline-like mystery woman who may be involved in the crime. As his investigation of the crime, and his interest in Patience, intensifies, he begins to see that the line between Patience and the killer dubbed Catwoman have blurred and the two have far too much in common to ignore. Will Catwoman be able to exact her vengeance before Tom slaps on the cuffs? The special F/X that give Catwoman motion are a cross between “Daredevil” and the cheesiness of the first “Spider-Man” flick. There is an artificial feel to the flick as the transition between live action and Catwoman’s CGI propelling around the city like, well, a slinky cat take place. Sophomore helmer, Pitof (just the one name), directs this slight effort to establish a franchise for the title character. While his star has the look and slink to give full body to the feline uber woman, the material is far too lightweight to get us through one movie, never mind dealing with a series, or even a single sequel. “Catwoman” is representative of the Hollywood manufacture of movies we have grown used to over the years. There is little new or different and lots relies on the sexy swing of Catwoman’s hips as she prepares to kick butt. Halle Berry fits the cat suit quite well but that is not a reason to make a movie. Her strut looks like a model walking down the runway but she sure is purr-ty The acting is on par with the comic book source material and never gets beyond the surface. Halle is too humble and self-effacing as Patience but, I have to admit, cuts quite a swath as the title character. Sharon Stone looks great (the wonders of deadly cosmetics, I guess) but does nothing and gets nothing to do until near the very end. I would have loved to see if the actress could take on a more fully realized role – probably not. Lambert Wilson puts an elegant sleaziness on his George Hedare character that reminded me of James Fox in performances past. Benjamin Bratt does the best he can as the good cop/good man who believes in Catwoman/Patience. Alex Borstein is amusing in the small role as Patience’s best friend and biggest fan, Sally. Frances Conroy, as professor Ophelia Powers, takes on the job of telling Patience (and us) the history and ancient lineage of catwomen and their place throughout the millennia. Cheesy special effects, under drawn characters, simplistic writing (by a committee of scribes) and music video direction will likely draw the attention-deficit crowd but there is little here for the discerning filmgoer. Hell, there is little here for comic action fans. I wonder if Catwoman creator, the late Bob Kane, is rolling over in his grave?