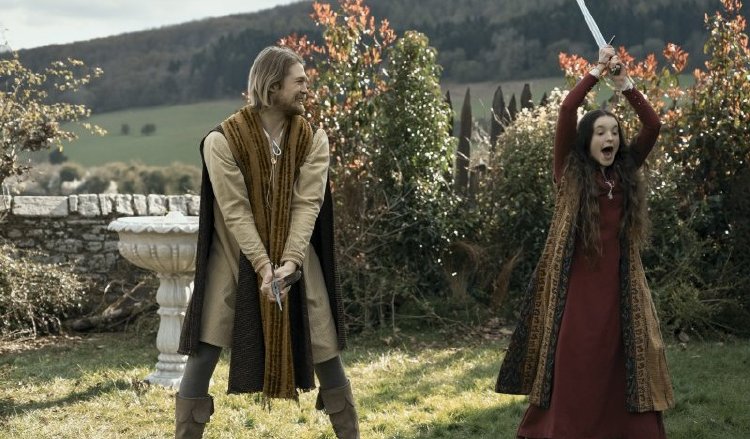 and Lady Aislinn (Billie Piper, Showtime's 'Penny Dreadful') eschews titles, avoids chores and relishes making mischief.  Her world is about to get a major shake-up when her father has no other financial option but to marry her off for a dowry, but wit, humor and resourcefulness will thwart Rollo’s efforts with “Catherine Called Birdy.”

Adapting the Karen Cushman YA novel she identified with in fourth grade, writer/director Lena Dunham ("Sharp Stick) offers her most surprising work to date, a joyful, loving, hilarious tale of rebellious feminism which also embraces its male characters with affection.  And she couldn’t have found a better lead than she has in Bella Ramsey ("Judy," HBO's 'Game of Thrones'), a spirited, natural comedienne.

The film opens with a boisterous mud fight to an anachronistic cover of Supergrass’ ‘Alright’ before segueing to Birdy’s narration from the diary she shares with older brother Edward the Monk (Archie Renaux, "Morbius"), one of the many characters introduced with cheeky title credits (‘more fun than most monks’).  Birdy is as much at home with goatherd Perkin (Michael Woolfitt) or dairy maid Meg (Rita Bernard-Shaw) as she is with her best friend Aelis (Isis Hainsworth, 2020's "Emma"), the 16 year-old daughter of the aged Lord Gideon Sidebottom (David Bradley, "Harry Potter's" Argus Filch) and his disdainful younger wife Lady Berenice Sidebottom (Mimi Ndiweni, Netflix's 'The Witcher').  Birdy delights in criticizing her father’s poor swordsmanship and brutally pointing out that his ‘cunning and strength’ keeping Stonebridge going involved selling grandfather’s tapestries but has empathy and concern for her more indulgent mother whose habitual delivery of stillborn children is beginning to endanger her health.

Birdy also enjoys a warm relationship with her Scottish nursemaid (Lesley Sharp, "Naked") and it is Morwenna she turns to when she finds blood on her clothing in the privy and thinks that she is dying.  Instructed otherwise, Birdy realizes this step into womanhood will accelerate her father’s attempts to marry her off, but when her mother discovers she has been hiding her menstrual rags, Birdy loses an ally, however reluctantly.

Ramsey’s bold moves to turn back suitors are hilarious, beginning with her and her willing brother Robert’s (Dean-Charles Chapman, "1917") outrageous description of Lady Catherine as a ‘vile creature of vomit and snot’ with a third ear on the back of her neck to the wealthy wool merchant (Russell Brand) who turns back before arriving at Stonebridge Manor.  She’ll black out her teeth and sing off key to the procession of men considering her hand, but when her Uncle George (Joe Alwyn, "The Favorite") returns from the Crusades she’s smitten.  He loves her dearly – as a niece – and when he kisses Aelis Birdy is gripped with jealousy.  That coupling is ill-fated, however, Aelis wed to a 9 year-old while George weds the 48 year-old Ethelfritha Rose Splinter of Devon (Sophie Okonedo, "Hotel Rwanda") for her fortune.  When Aelis’s young husband dies and Birdy learns her brother Robert desires her friend’s hand, she finally surrenders to the dreaded Sir John Henry Murgaw aka Shaggy Beard (Paul Kaye, HBO's 'Game of Thrones') to ensure her friend’s happiness with surprising results all around.

Dunham’s giddily modernized, expansive “Catherine Called Birdy” is bursting with good nature. Andrew Scott has softened Lord Rollo from a greedy egoist into a more well-meaning, if ineffectual man who redeems himself in his daughter’s eyes with his forceful support and obvious love of his wife as she deals with a terrifying childbirth.  Piper contributes a sense of humor which rationalizes her indulgence of her naughty daughter.  Alwyn is the picture of the romantic hero until Birdy’s eyes are opened to his reality.  Okonedo gives Ethelfritha a whimsicality born of wealth making her an unexpected friend to the younger woman.  In his film debut, Woolfitt’s character provides diversity for the groundswell of romantic pairings at the film’s climax, which also finds Morwenna enjoying the company of Ralph Ineson’s (“The Witch”) cart driver Golden Tiger.