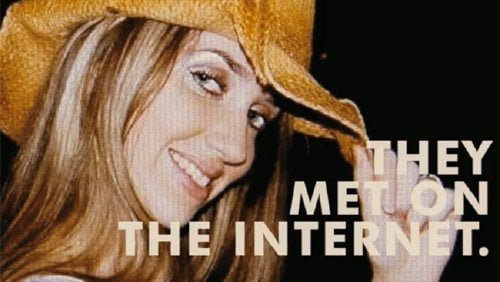 Yaniv 'Nev' Schulman is a good looking twenty-something photographer who shares a Manhattan office with his filmmaker brother Ariel 'Rel' Schulman and Rel's partner Henry Joost. When Nev receives a painting based on a dance photograph he took for a local paper from Abby, an 8 year-old girl living in Michigan, he begins to correspond with Abby's friends and family via Facebook and Joost and his brother convince him to become the subject of their documentary "Catfish."

That unusual title, a metaphor for events in the film explained in the film's final minutes, isn't the only thing garnering attention for this film. When shown at the 2010 Sundance film festival, audiences believed they were watching an actual documentary. Now folks are not so sure (it was not one of the sixteen films selected for the U.S. documentary competition, for what it's worth). "Catfish" works as a parable on how the Internet and various social networking tools like Facebook and youtube allow you to make far flung connections - but also how easy it is to hoodwink your audience - just like this film? After their opening gambit, one that feels lifted from Amir Bar-Lev's 2007 "My Kid Could Paint That" (another doc that raised questions, but one which was in the running for the Grand Jury prize), the film gathers steam as Nev becomes involved with his new 'Facebook family.' He sends Abby photographs that she may paint and in turn hears from her mother, Angela, grateful for the support. Angela is a stunner, admired by all three office mates when a portrait of her by her daughter arrives at their office. Angela's husband, Vince, is a good looking guy too. Most provocative, though, is Meghan, Abby's older half-sister who is a dancer, just like in that first portrait. Nev begins an online flirtation that becomes quite heated. But there are troubling signs. While Nev speaks with Angela on the phone, Abby never seems to be around to say hello. The trio can find no evidence online of Abby's purported exhibits. When Meghan sends Nev a sexy cover of song Nev's requested, he discovers it sounds identical to a version on youtube. Then they find the local gallery space the family ostensibly purchased for $30,000 still sits for sale. They decide to make an unannounced visit on a return trip from the Vail Dance Festival and what they find is not really all that surprising. If this really did unfold as the filmmakers claim, then the story is indeed sad and provocative, but its reputation has preceded it and aware audiences will expect something about what like happens. About the only surprise is just how many layers of lies are uncovered (closing credits negate 'facts' presented in the film's final third). Joost and Schulman's 'reality thriller,' which is how Rogue is classifying the film, makes very good use of various types of invasive computer applications - the mixing of Google satellite, GPS systems, Photoshopping and chat apps with Facebook and youtube does build to a potent essay on life in the age of the Internet and it is notable that an old fashioned postcard is one of the items which 'trips up' Nev's virtual lover, but there are also arguments that the videotaped reality is a little too slick. Why too, when Nev finally meets Abby, does she appear to be miles from home unsupervised with a girlfriend in a 'beach house?' If a guardian was present who didn't want to sign a waiver to be shown in the film, why not state that or digitize the person out of the frame for added authenticity? One must also wonder about the veracity of a film that begins focusing on a child prodigy only to drop that subject when something more titillating presents itself - Abby almost gets lost in the shuffle. "Catfish" maintains interest and does work on some of its thematic levels, but its impact will be diluted as it continues to be shown to wider audiences. Angela's husband Vince tells the camera that when cod was shipped from Alaska to China, it used to get soft and mushy until someone discovered adding catfish to the mix kept the cod agile. So, who's the catfish here (and where does one find them in Alaska)?

24-year old Nev Schulman is a Manhattan-based photographer who displays his work on his Facebook wall. 8-year old Abby from a rural Michigan town contacts him, asking permission to create a painting from one of his photos. He grants permission, beginning a long distance internet relationship with the girl, her 20-year old sister, Megan, and their mom, Angela. There is something, though, that bothers him. His brother, Ariel, and fellow documaker Henry Joost chronicle Nev’s one-man investigation to find the truth in “Catfish.” This is the first film for the Facebook/Twitter generation that deals with the lies and ambiguities that pervade the internet. Nev thinks he is dealing with a child prodigy, her sexy sister and beautiful mom. But, he sees untruths in their communication, both via Facebook and plain old telephone, as he uncovers out and out lies about the girl and her family. As such, “Catfish” will attract those who spend their time making friends and sending tweets. For me, a dinosaur to 21st Century technology, I found it self indulgent hokum. There is a lot of controversy as to the veracity of “Catfish.” Is it really a straightforward detective story as internet private eye Nev unravels the carefully constructed lies by his new “friends,” proving them a fraud? Or, is it a hoax perpetrated by the Schulman brothers and Joost to show how easily the public can be duped? The answer for me is, simply, I don’t care. I believe that a documentary should do one of two things: educate you about things not known or present you with something familiar but with added depth of knowledge. For me, “Catfish” meets neither of those requirements. This is a precisely targeted documentary for the millions of people who have begun to live their lives via their Facebook persona. Having never even been on Facebook, and have never texted, twittered or sent a message via my iPod (which I do not own), there is little of interest to me. I refuse to be a part of this new culture, making “Catfish” boring.