Catch the Fair One 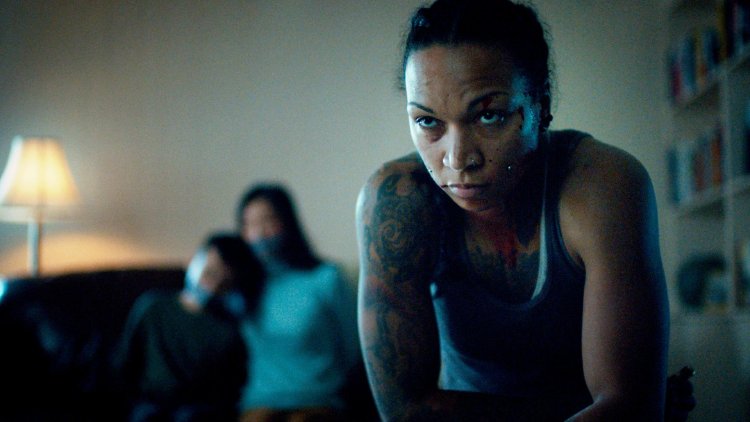 We meet Kaylee “K.O.” Uppashaw (Kali “K.O.” Reis, the WBA and WBO female light welterweight boxing champ) preparing for a championship fight with her trainer Brick (Shelly Vincent) before she wakes up in a women’s shelter, removing the razor blade she keeps in her cheek for protection.  Kaylee’s had a rough time since her younger sister Weeta (Mainaku Borrero) disappeared, becoming estranged from her mother Jaya (Kimberly Guerrero, "The Glorias"), addicted to drugs and working as a waitress in a run down diner.  But when she gets a lead on local sex traffickers who snatched Weeta, Kaylee decides to put everything on the line and “Catch the Fair One.”

Cowriter (with star Reis)/director Josef Kubota Wladyka’s film is a gripping neo-noir thriller on its surface with a socially conscious message on the plight of Native American women and sex trafficking in the U.S. as its foundation.  Imagine “Girlfight” crossed with “Wind River” and “Frozen River” and you’ll have some idea of the nature of this one, whose title is slang for ‘fight.’  Reis, the first Native American woman (she’s also half Cape Verdean) to win a championship boxing title, is absolutely magnetic in the lead and Wladyka, who studied under Spike Lee and was mentored by Executive Producer Darren Aronofsky here, belies his sophomore feature filmmaking experience.  Both are talents to watch.

After meeting with a P.I. who shows Kaylee an ad for an underage young woman touting her Native American ancestry and promising ‘no protection’ and rates by the half hour, Kaylee begins to train again.  She goes to see her mother, who is dealing with her grief by running a support group but who cannot even remember her older daughter broke up with her girlfriend two years ago.  The loyal Brick cautions Kaylee that she doesn’t think that girl was Weeta, missing now for years, but Kaylee’s handed over a stack of cash for the privilege of going undercover as a trafficked Native American.  What she experiences is grim.  She’s also given an unanticipated and hideous obstacle right from the get go when the guy who makes up those ads, Danny (Michael Drayer, TV's 'Claws,' 'Mr. Robot'), injects the recovered addict with heroin.

The original screenplay covers a lot of bases, not only illustrating the devastating effects of human trafficking on those left behind, but of the links in the chain from when a girl is grabbed to the guy at the top (Kevin Dunn’s Willie, who chills when confronted by Kaylee with ‘you think I remember their names?’).  Kaylee is confronted with having to inflict harm not only to a fellow Native American, but a woman (Tiffany Chu, "Ms. Purple"), and, thankfully makes the right choice each time.  The film’s ending is elegant, framed much like its beginning and delivering a gut-wrenching, dramatic punch.  Cinematographer Ross Giardina adds to the film’s neo-noir feel, several scenes shot in nighttime car interiors, rain-slicked windows and colorful exterior lighting enhancing the mood.  Composer Nathan Halpern (“Swallow”) contributes an ominous soundscape.

“Catch the Fair One” is an exceptionally well executed thriller, a gritty tale of a courageous fight for justice.

Kaylee (Kali Reis) was once a champion boxer but has lost her way. Her younger sister, Weeta (Mainaku Borrero), was kidnapped by human sex traffickers and the young fighter is determined to find and rescue her sibling. And, she will do, quite literally, whatever it takes in “Catch the Fair One.”

Director and co-scripter (with his star Kali Reis) Josef Kubota Wladyka attacks – and I mean “attacks” in the strongest terms – the crisis of native American women disappearing in alarming numbers. Think about it, if a young white woman is missing, heaven and earth is moved to get to the bottom of it. Not so for indigenous woman who just vanish and nothing is done about it.

Kaylee has endured some of the hardest knocks that her life has delivered but has always been a fighter, in the ring and out. Her long missing half sister – same Native American mom different fathers – was kidnapped by sex traffickers two years ago and Kaylee has never stopped thinking of her and her rescue.

To find her sister, she has to immerse herself into the trafficking flow as a victim and has little to go on, putting her very life at risk in her quest. Kali Reis, as Kaylee, is brand new to the acting business, having been a world class boxing champ. Her character speaks little but there is a natural intensity to her body language that speaks volumes.

There is a plausible desperation in Kaylee as she trains hard at her fighting skills; arranging bouts with male boxers in preparation of what she knows will come. It is an intense character study by the boxer-turned-actor Reis and will surely garner more roles in the future. Also, the supporting cast, mostly made up of unknowns (Kevin Dunn is one of the exceptions), lend a genuine credibility to the story. There is sudden violence, often, and it suits the revenge/rescue story as Kaylee must surmount ever obstacle presented her.

It is a pleasure, for a guy who loves movies, to see two talents – star and director – make such a striking introduction on what had to be a next to nothing budget. I look forward to their next collaboration and I am sure there will be one.

IFC Films opens “Catch the Fair One” in theaters and everywhere you rent movies on 2/11/22.