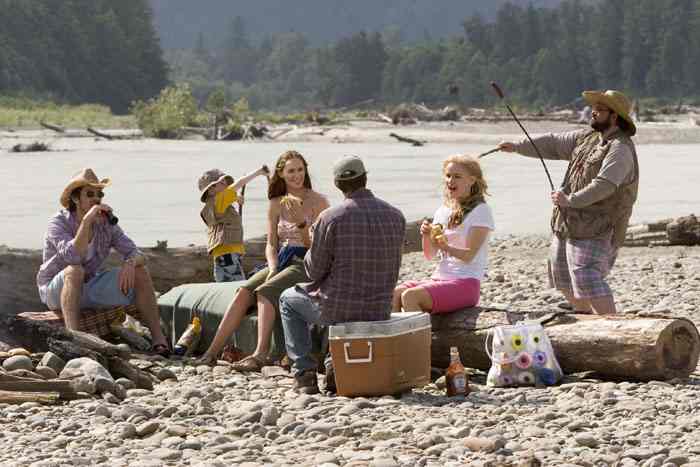 When Gray Wheeler's (Jennifer Garner, "13 Going on 30") wedding date instead becomes the day of her fiance's funeral, she's buttressed by intended Grady's best Boulder buddies Dennis (Sam Jaeger, "Lucky Number Slevin") and Sam (Kevin Smith, "Clerks II"), but it's the childhood friend from L.A., Fritz (Timothy Orphant, "The Girl Next Door," HBO's "Deadwood") who turns out to know the deceased's real secrets and enables Gray to live again just like the fly fishing practice of "Catch and Release."

Screenwriter Susannah Grant (writer of "Erin Brokovitch" and "Charlotte's Web") makes her feature directing debut and proves stretched thin in both roles. Would only the film have been as well assembled as the game and likable cast that barely keep it afloat. Grant fills her opening frames with the white flowers that will take her audience from expectations of a wedding to a funeral. Gray (as in the tones between more knowable extremes) is truly bereft, yet Garner, a skillful romantic comedienne, pulls some laughter through the tears, recollecting her last words to her fiance ('no more nookie til you figure out where to put your mother's bridge club') in a voiceover paired with a surprised face streaming with tears. Her day only gets worse when, after seeking respite in the bathroom tub, she overhears Fritz's assignation with the enthusiastic caterer ('sockittome!'). Unable to afford the rent in the digs she was to share with Grady, Gray moves into the house he shared with Sam and Dennis and discovers Fritz has taken up residence for a few days as well. The disparate group of roommates all have trouble coping except, it seems, for Fritz, but Gray discovers there is more to him than meets the eye and that he is there for her when some hurtful truths come out. "Catch and Release" is kind of the inverse of last year's "You, Me & Dupree" jammed together with an old Bette Davis weepie. Jennifer Garner, devoid of makeup, is a charming actress with an expressive face and she has nice chemistry with Olyphant (somewhat one note playing an underdeveloped character), as well as with her real-life hubbie Ben Affleck's old buddy Kevin Smith who provides much of the film's laughs. Smith, though, is allowed to overshadow Jaeger, a flaw that sums up the film's underlying problem of imbalance. Juliette Lewis trots out a character we've seen from her before, but shades Maureen, the mystery woman, with nice notes of vulnerability. Fiona Shaw is also solid as the deceased's mother, her bad behavior exposed as her own way of dealing with her grief. Boulder locations give the film a fresh environment that's well utilized by the production team, but the titular fly-fishing metaphor is undercooked and Sam's job at Celestial Seasonings an example of product placement run amok. In the end, "Catch and Release" proves as temporarily satisfying as its titular sports metaphor - its OK while you're watching it, but you're left empty handed.