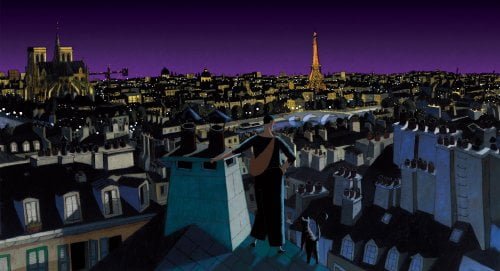 Dino is a Parisian cat leading a double life. By day, he is cared for by Zoe (Oriane Zani), a little girl who has been mute since her father was brutally murdered by a notorious crime boss, Victor Costa (Jean Benguigui). By night, though, Dino prowls the rooftops of Paris with Nico (Bruno Salomone), a skilled and kind-hearted cat burglar who treats Dino as his sidekick in “A Cat in Paris.”

Traumatized by her father's death, Zoé (voice of Oriane Zani) no longer speaks. Her mother, Jeanne (voice of Dominique Blanc), the Superintendent of Police, is trying to balance her job and the needs of her daughter with the help of Claudine, but the little girl's best friend is her cat Dino. But Dino has a double life, spending his evenings with Nico (voice of Bruno Salomone), a burglar. One night, Zoé decides to follow Dino and ends up kidnapped by her father's killer in "A Cat in Paris," a surprise nominee for Best Animated Film at this year's Academy Awards. Here's an adult animation from Belgium with a sly, geometrical animation style and a story that combines the French policier with the American gangsters that originally inspired them. The story could be scary for small children - Zoé must be saved from Victor Costa (voice of Jean Benguigui), then kidnapped by one of his deep cover agents. Still, this thoroughly French film (Dino's nose for perfume helps solve the crime) should please older animation buffs. The animation uses certain shapes to suggest its titular feline subject. Nico's face, in particular, is shaped much like Dino's and fish pop up in paintings and the design of a stolen bracelet. Shadow is used with imagination - Jeanne practices Tai Chi with her shadow reflected back from the floor and another scene takes place in pitch blackness, the characters seen in white line outline. Serge Besset's original music is rooted in the thriller genre, playful with portent and ominous violins. The story (screenplay and dialogue by codirector Alain Gagnol with additional dialogue by Jacques-Rémy Girerd) is pretty basic to the genre, but "A Cat in Paris" proves that sometimes it's in the telling. Watching Dino and Nico clambering over Parisian rooftops, complete with a climax on Notre Dame's, is just one of its pleasures. The film even had me thinking of Picasso, a possible inspiration for the animators.

French animation, in recent years (starting with the sublime “The Triplets of Belleville (2003)”), has been on the fast track with the deft combination of storytelling and classic anime (3D has not corrupted the craft, yet, in France). Directors Jean-Loup Felicioli and Alain Gagnol have created a work that continues the Nouveau Anime movement (I just made that up) and does so with a truly original and exciting story. Zoe, grieving over the loss of her father, has not uttered a word since his death. Her mother, Jeanne (Dominique Blanc) is the police officer heading the investigation that, she hopes, will put Costa behind bars for a long, long time. Nico leads a solitary life, spending his nights prowling from one roof to another looking for an easy burglary with his companion. Dino will become the catalyst that will bring Zoe, Jeanne, Nico and Victor Costa and henchmen together in a thrilling climax. “A Cat in Paris” is animation, yes, but the story, its many threads and mature theme is aimed squarely at the adult and older teen audience that can appreciate a stirring drama in anime form. The fluidity of the animation, especially as Nico and Dino effortlessly and lithely cruise the Parisian rooftops, coupled with its great story (by Alain Gagnol) make “A Cat in Paris” a pleasure to watch. There are no laughs but there is a whole lot of sympathy for the well-voiced characters – except, of course, the despicable Victor Costa.