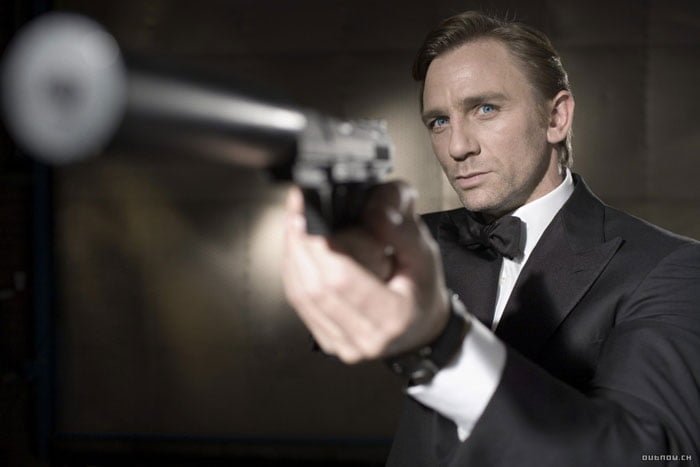 Newly promoted to 00 status, James Bond (Daniel Craig, "Road to Perdition," "Infamous") gets himself right into hot water when the media captures him executing an unarmed prisoner within embassy walls. A shaken M (Judi Dench, "Die Another Day," "Pride & Prejudice") may believe Bond has fled to the Bahamas, but he is proving his promotion, following the trail of terrorist financier Le Chiffre (Mads Mikkelsen, "King Arthur," "The Pusher II") right to the table of a high stakes poker game at "Casino Royale."

After enduring months of media and fan bashing, British actor Daniel Craig must be having the heartiest last laugh of his life. The new Bond is at least as good as perennial favorite Sean Connery in the role, and his first vehicle, thrillingly directed by series vet Martin Campbell ("GoldenEye," "The Mask of Zorro"), is the bracing breath of fresh air Bond has been gasping for. "Casino Royale" is one of 2006's best adult entertainments. Right from the opening credit animation one can feel both the comfort of something familiar and the excitement of something new. Rather than the over the top stunt sequence which recent editions have opened with, we're plunked outside a gray building in Prague in a black and white sequence that recalls the Cold War. But this is not the 1950s - this is a post 9/11 Bond and in a slick silvery scene intercut with a grittier, grainer flashback sequence, we see Bond earn his stripes - the double kill an agent needs for his double '0' status. The golden green jungles of Uganda introduce the shift to color and the villain, Le Chiffre, taking a seriously large cash investment from Steven Obanno (Isaach De Bankolé, "The Skeleton Key," "Miami Vice"), while off the continent's coast Bond trails Mollaka (Le Parkour stuntman Sebastien Foucan), a link to the lethal lynch pin. It is Mollaka whom Bond assassinates after a lengthy, death-defying chase across huge construction cranes and building frames, but his seemingly rash act moves him closer to his target. A splash of bright blue sea finds Bond at his next destination - the Bahamas - where cards are first dealt with money man Alex Dimitrios (Simon Abkarian, "Yes"). After divesting the shark of his Aston Martin, Bond adds insult to injury by picking up his woman (Caterina Murino) and his password. This leads him to the next agent and when Bond foils his attempt to blow up the world's largest airliner, Skyflight, on the night of its debut at Miami International Airport, he also backs Le Chiffre, who bet heavily on the airline's demise, into a corner. Now Le Chiffre has his investors on his heels and he stakes $10 million in Montenegro's Casino Royale game where he will bet against Bond, but Bond hasn't bet on treasury officer Vesper Lynd (Eva Green, "The Dreamers," "Kingdom of Heaven"), the mysterious beauty he falls for, then endangers when he calls Le Chiffre's bluff too soon. Screenwriters Neal Purvis and Robert Wade ("Die Another Day") together with Paul Haggis ("Crash") have fashioned a strong, silent Bond - one whose silences often speak as more than his words - and fittingly they find the joke in the word not said, unfinished sentences ripe with ribaldry, Bond's tumbles funny for what went before them. He's well matched with Vesper, a woman not forthcoming with her history. These two flirt psychologically profiling each other. Craig is a fabulously flinty Bond who also convinces of a lost heart. He's strong and defiant - this man tosses off jokes under extreme torture - but also capable of hurt, both physically and emotionally. The little known Green isn't quite up to his league, but she is stunning and creates a complex creature. Along with a newly rejiggered 007, we get a new kind of villain in Mikkelsen, a quieter mind-gamer far removed from some of the cartoonish foes of Bond past. This is a bad guy looking over his shoulder at his own bad guys. The always marvelous Judi Dench is most welcome as the only link to past casts, especially in a Q-less Bond, but Giancarlo Giannini is a bit bland as a duplicitous agent and the great character actor Jeffrey Wright ("Broken Flowers," "Syriana") is wasted as the CIA's entry at the gaming table. Director Campbell's sprawling cast parallels his sprawling saga, which admittedly has a few scenes too many, but Campbell so adroitly marries globe-trotting action with romance that the film never feels its 144 minutes. Like the well-chiseled Craig, the film itself has a pungent physicality.