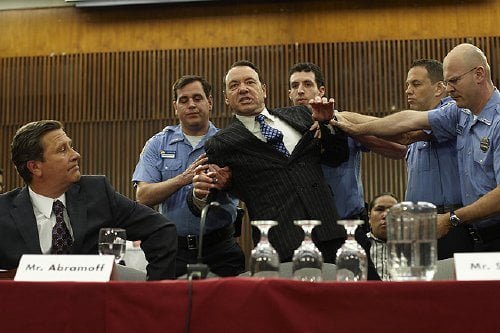 Jack Abramoff (Kevin Spacey) and his protégé, Michael Scanlon (Barry Pepper), are on the fast track as two of the leading lobbyists operating at the country’s political center, Washington DC. Big homes, flashy cars and expensive jewelry are just a part of their fast accumulating wealth by brokering deals between corporations and congressmen and senators, but greed will do in the duo in “Casino Jack.”

Director George Hickenlooper("Hearts of Darkness: A Filmmaker's Apocalypse," "Factory Girl"), who passed away suddenly on October 29, 2010, went head to head with Alex Gibney's documentary "Casino Jack and the United States of Money" and, unfortunately, his feature film is no where near as compelling as Gibney's work released earlier in the year. The tone is too satirically smug, off much in the same way as "I Love You Phillip Morris," with Spacey doing everything but tap dancing to garner attention to a character he never makes more than skin deep. The score is a cheesy retro affair which accentuates the film's 'Love Boat' flavor. But, every now and then, screenwriter Norman Snider ("Dead Ringers," "Body Parts") produces a burst of noteworthy dialogue and the idea to use Abramoff's past as the producer of a few Dolph Lundgren movies to weave in constant movie references, like a fantasy involving "...And Justice For All," works more often than not. Jon Lovitz is amusing as mattress merchant Adam Kidan, who fronted for Abramoff in his Sunrise Casinos takeover.

I first became really aware of the life and times of Jack Abramoff with Alex Gibney’s well-crafted documentary, “Casino Jack and the United States of Money,” a riveting account of the amazing lengths a man will go for money, lots of money. The late director George Hickenlooper brings us his last film, the Hollywood version of the story of “Casino Jack.” This is a slickly made, slickly told tale of greed and avarice but it lacks soul. The telling is quickly paced and edited as it follows Jack in his meteoric rise in the influence peddling business to his equally meteoric fall as he begins to believe he is invincible and crosses the line when he defrauds one of his clients, a Native American-owned casino, of tens of millions of dollars. The rapid fire editing, fast paced dialog and veteran actors make “Casino Jack” fly by but, by the end, it is forgettable fare. Acting is fine but the characters, Jack and Michael, are all flash and fast patter but insubstantial, garnering neither empathy nor sympathy. This is a problem since you should at least side with the protagonists, even as the cross over the legal line. Instead, “Casino Jack” is a moral parable that greed is bad. (Except, if you don’t get caught.) This is not the kind of film you would call likable. If you want to get the real skinny on Casino Jack and his amazing story, see the Alex Gibney documentary. If you just want to be entertained for a couple of hours, rent the movie.