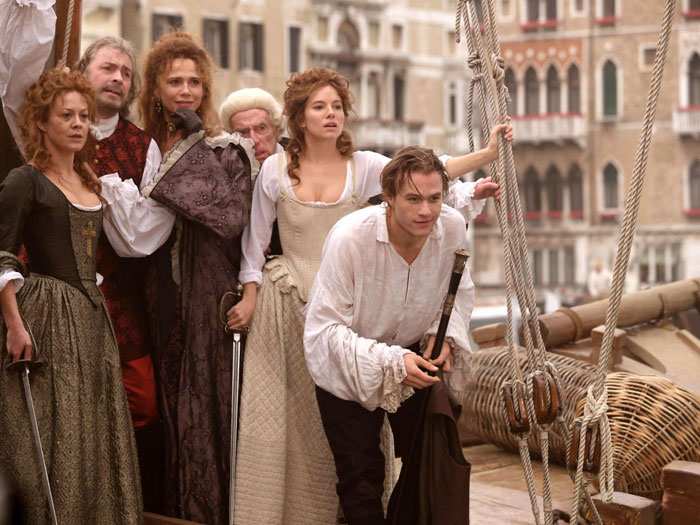 Giacomo Casanova (Heath Ledger) is legendary as a soldier, spy, writer, philosopher and adventurer but, mostly, he is best known as the notorious lover of beautiful women. It’s 18th Century Venice and Casanova, once again, is one step ahead of his latest conquest’s returning husband/father/brother/priest. It is also the time of the Inquisition and the love legend is wanted for trial because of his debauched ways in “Casanova.”

In 1700s Venice, the most legendary lover of all time is being squeezed between the Catholic Church, which wishes to make an example of his immoral ways, and a woman, Francesca Bruni (Sienna Miller, "Layer Cake"), who has bewitched him just as he's become betrothed to assuage the clerics. Francesca's scandalous in her own way, disguising herself as a man to lecture at university and author pre-feminist pamphlets the Church disapproves of. The man known for loving and leaving is now faced with proving steadfastness to a woman who will not be swayed. He piles disguise on top of disguise in order to win Bruni's hand and keep one step ahead of Bishop Pucci (Jeremy Irons, "The Merchant of Venice"), the Church's inquisitor, but wearing too many masks proves his undoing and he is finally revealed as "Casanova." This delightful, spirited romp is like a comical Shakespearean rewrite of the Zorro legend (screenplay by Jeffrey Hatcher ("Stage Beauty") and Kimberly Simi from a story by Simi and Michael Cristofer ("Mr. Jones," "Original Sin")) if Zorro's sword were more, er, symbolic. Director Lasse Hallström ("The Shipping News," "An Unfinished Life") perks up behind the reins of an outright comedy, delivering his best film since 1999's "The Cider House Rules" and star Heath Ledger showcases his range with an adroit about face from his buzzed about dramatic turn in "Brokeback Mountain." Casanova's introduced in a nunnery, 'ruining' Sister Beatrice (Lauren Cohan), a cousin, before escaping through previous black clad conquests. The Doge (Tim McInnerny, "The Emperor's New Clothes") warns him that the Vatican is watching him. Casanova responds by pursuing a wife, one of Venice's last remaining virgins, Victoria (newcomer Natalie Dormer), who he espies like a vision of the Virgin Mary. Meanwhile, across a canal, the shyer Giovanni Bruni (Charlie Cox, "dot the i," "The Merchant of Venice") pines for the same woman. He also defends his sister Francesca from their mother Andrea (Lena Olin, "Chocolat"), who, widowed and financially strapped, is desperate to see her daughter marry her betrothed, the 'lard king' of Genoa, Papprizzio (Oliver Platt, "The Ice Harvest"), who she has yet to meet. When Giovanni challenges Casanova to a duel over Victoria, Francesca, disguised as a man, takes his place, but Casanova learns her true identity and is instantly smitten. Presenting himself as Salvato, he begins to woo her, but Papprizzio's arrival calls for not only more deception, but kidnapping as well. By the time Carnivale rolls around, Casanova must play three separate men each with his own unwanted pursuer. "Casanova's" plot lines are almost dizzying and employ several clever themes. The Shakespearean device of gender swapping disguises and crossed lovers are well used, as is the Venetian location (both Irons and Cox starred in "The Merchant of Venice" this time last year, a Shakespearean play which also featured a woman posing as a male attorney in court to defend her lover). When Casanova reads the suggestion of Bernardo Guardi, Francesca's authorial alter ego, to present a pig instead of a dog as a gift, the situation is not only ripe for obvious wordplay, but the pig is reflected back both in the obese pork fat merchant, Papprizzio, and the now unwanted Victoria, her porcelain features turned porcine when Casanova views her anew. Papprizzio deceives with his own false appearance, having proffered a portrait of a much slimmer man, which makes him the perfect target for Casanova's weight loss scheme, a bit of hilarious deviltry which keeps the man out of the picture until the way is clear for a much better match. No one is who they would appear, not even Pucci, whose religious station obscures vanity, jealousy and ambition. Ledger gives a charismatic and appealingly playful performance as Casanova, who in this version of the legend spends more time outfoxing hunters than hunting foxes and Siena Miller, her blond locks turned brunette, displays much more spunk and character than in previous, blander appearances, but it's Oliver Platt who steals the picture, just as he did with the earlier "Ice Harvest." Clad in a fat suit, Platt manages to be both ridiculous and lovable and it is his love connection that proves the most satisfying. Irons is also having a gay old time, his plummy delivery so over the top he's like a wine connoisseur sloshing juice around his mouth. Olin, Cox and McInnerny all add to the fun as does Omid Djalili ("Sky Captain and the World of Tomorrow") as Casanova's right hand man Lupo. "Casanova's" R rating is one of the more ludicrous calls made by the MPAA this year - it's great bawdy fun, but hardly explicit or truly vulgar (there is the implication of oral sex beneath a covered table). Of this year's crop of mainstream holiday comedies, "Casanova" is the cream. Hallström has whipped up a Christmas confection for our enjoyment.

Director Lasse Hallstrom works with the story by Jeffrey Hatcher and KimberlySimi (with Simi and Michael Cristofer sharing screenplay credit) that is more romantic farce and amiable sexy comedy than lusty swashbuckling adventure. Sure, there are sword fights now and again, but “Casanova” is more about the man and his finally finding a woman the equal to his intelligence, education and wit. He discovers his match in smart, outspoken Francesca (Sienna Miller), who is the secret author of incendiary books that have the Vatican screaming, “HERETIC!!!” But there’s more to this than just Casanova finding his life mate and living happily ever after. Things get juicy when the rogue spies a most lovely creature, blond and beautiful Victoria (Natalie Dormer), the one true Virgin of Venice who is dying to give up her chastity to the sexy Casanova. Meanwhile, across the canal moons shy but handsome Giovanni Bruni (Charlie Cox) who has loved Victoria from afar for years. He also happens to be Francesca’s brother. And, Francesca, it seems, is betrothed to a wealthy Genoese lard merchant named Papprizzio (Oliver Platt). All of the different love angles are steeped in the signs of the times when religious persecution for differing opinions or actions meant death to the heretics” singled out by the Inquistors, here in the form of Bishop Pucci (Jeremy Irons). Casanova, because if his ribald ways, faces over 100 charges of stealing various ladies’ virtue – grounds for a certain death sentence. The flamboyant playboy-adventurer, though, is a master of disguise, a talent he uses to confuse and mislead the High Inquisitor as he tries to prove himself worthy of Francesca. This is no small feat for Casanova who is used to women swooning in his presence, not resisting him as Francesca does. Francesca, who writes her scandalous books under the nom de plume Bernardo Grudi, is as accomplished at the pen, horse and sword as is the multi-hyphenate Casanova, intriguing the man. But, since Francesca would refuse the womanizer out of hand, he uses one of his many disguises to pretend to be her never-seen fiancé, wealthy lard seller Papprizzio. Casanova and his loyal right-hand man, Lupo (Omid Djalili), convince the portly merchant (well played by Platt) that they can make him slim, trim and handsome. But, to accomplish this the real Papprizzio needs to be kept in utter seclusion for some time, freeing Casanova to delve into the real Francesca. The screenplay puts a different spin on what we normally associate with the Casanova legend – a man whose charm, humor and sexy handsomeness has resulted in many a prim and proper young Venetian lady giving herself, quite willingly, to him. “Casanova” starts out in exactly this manner as he makes love with a pretty young novice then run like the dickens to get away from the police. When the angry head priest of the convent tells the girl that her night with Casanova earns an eternity of damnation, she, hiding a smile, mutters, “It was worth it!” Things take a turn for Casanova when he sets his cap for Victoria, played with sexy innocence by Natalie Dormer, and earns the ire of Giovanni who challenges the sword master to a duel over the girl’s honor. Unbeknownst to the former soldier, Francesca, in disguise, stands in for her younger brother, nearly besting Casanova when he unveils her true identity. Sparks fly, but they’re not the romantic kind, at first, and Casanova must prove himself worthy of the feisty young woman. This, with all the disguises, comedy and multi-angled love stories make “Casanova” light as a feather and eminently enjoyable period comedy. Heath Ledger is on a roll with his two very different back-to-back performances – from “Brokeback Mountain” to “Casanova” – that represent a good stretch of the actor’s hitherto unrecognized thespian skills. He plays the confident dandy with an assured grace that befits the character and has fun in the process. Ledger is joined by an excellent ensemble cast. Sienna Miller has good screen presence as Francesca, making her a true equal in every way and, as such, the perfect life mate for Casanova. Jeremy Irons has a great time chewing scenery as the near-wicked Bishop Pucci. Oliver Platt, a reliable comedy character actor (he was the high point in the recent “The Ice Harvest), gives his all here, providing the overweight Papprizzio with real complexity of character – and the chance to romance the beautiful Andrea (Lena Olin), Francesca and Giovanni’s still-desirable mother. Charlie Cox, too, is first-rate as the lovelorn Giovanni who, by the end of the film, may well be a Casanova-in-training. I also enjoyed Omid Djalili as Lupo. The amusing sidekick is more of a friend and confidant to his master than he is a servant and Djalili makes it real and funny. Lasse Hallstrom and his production team did the only thing they could do with a story about the great lover of Venice – they shot the film on location in that magnificent water-bound city. This gives the film a beautiful locale as the backdrop for the ornate costumes and sets. Casanova” is a bawdy period romp that is naughty but nice. It is an intelligent romantic comedy that shows off Hallstrom eclectic directing skills. And, it’s very talented cast and 3-D characters make this a fun frolic, too.