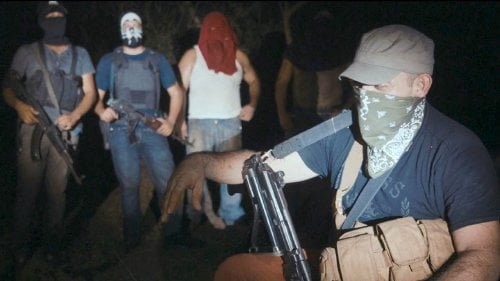 The Mexican drug cartels have wielded enormous power, taking lives at will and defying both the Mexican and American governments. But two men, on opposite sides of the border, head movements leading ordinary citizens to take up arms to fight for and take back the “Cartel Land”

In the dead of night, director Matthew Heineman ("Escape Fire: The Fight to Rescue American Healthcare") and his co-cinematographer Matt Porwoll talk to a Mexican cooking meth with fellow villagers. They don't like what they do, but Heineman is told that 'if we followed our hearts, we'd be screwed over.' In the Mexican state of Michoacán, Dr. Jose Mireles is tired of the violence inflicted on innocents by the Knights Templar drug cartel, and so he begins a grass roots movement, leading the people to defend themselves as the Autodefensas. Meanwhile, across the border in Arizona, veteran Tim "Nailer" Foley and the Arizona Border Recon have taken matters into their own hands, thwarting illegal crossings led by the cartels. These peoples lives are a constant struggle because they live in "Cartel Land." This year's Sundance prize winner for best documentary director and best cinematography is an eye opening look at organized vigilantism. Mireles' story is inspiring to watch as his movement grows and succeeds, only to be undone by internal and exterior politics and the man's own feet of clay. Nailer's story, unfortunately, is a lot harder to pin down. Although at one point he admits that 'innocent people' are adversely impacted, it is difficult to tell if he is one more anti-immigration redneck or truly dedicated to fighting the cartels (the Arizona Border Recon is branded a right wing hate group by the Southern Poverty Law Group). Mireles' accomplishments are evident, Nailer's less so. The film's uneven balance between borders is mitigated by the film's beautiful cinematography (Matthew Heineman and Matt Porwoll's cameras frequently put them in the line of fire) and vibrant score by Jackson Greenberg and H. Scott Salinas. The tale of Autodefensas is not only a shocking look at the evils of the cartels and the struggle to overcome them, but also a more universal story of the growth of a political group - the more people who become involved, the grayer things become. By the time Heineman circles back to where he started, the conclusion is horrific and shocking. 'We're the lucky ones for the time being,' says the same man who rued the way he's made his living. Grade:

Matthew Heineman and his documentary team embed themselves on the side of the good guys in the battle against the powerful drug cartels – here personified in the Knights Templar cartel that holds the Mexican population it controls in virtual prison. “Cartel Land” focuses on two of the fighters in the war against the drug lords – Tim “Nailer” Foley, head of the Arizona Border Recon militia north of the border and Dr. Jose Mireles, the leader of the Autodefensas civilian militia in the Mexican state of Michoacan, some 1030 miles from the border. I am not going to go into the details of the private war between the good guys and the bad guys. What is most impressive in “Cartel Land” is the role played by Heineman and his crew in putting us in the middle of the action – much like the news media did in the second Iraqi War. The result is an often frightening, often gut-wrenching look into a war the effects us all – one sickening statistic is that most of the drugs produced by the cartels ends up in the US. It is an epidemic that the US government deals with by putting up a fence while the Mexican government is so corrupt as to not exist in the battle. This is not the kind of documentary that it interesting and educational. “Cartel Land” is that but it is also an insightful look into an issue that is having a devastating consequence on the citizens of two countries – and one of them is ours.