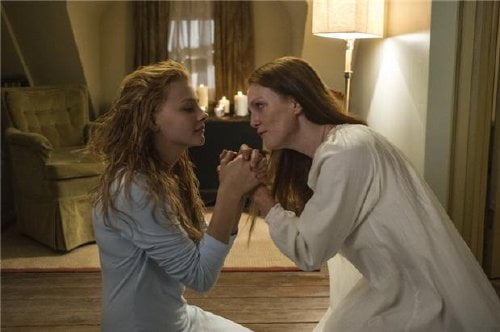 When an awkward high school senior gets her period and doesn't know what it is, she panics in the girls' locker room, drawing the jeers of the other girls who begin throwing tampons. One, Chris Hargensen (Portia Doubleday, "Youth in Revolt"), is even cruel enough to tape her humiliation and upload it to YouTube. When Chris refuses the punishment doled out by gym teacher Ms. Desjardin (Judy Greer, "The Descendants") and gets ousted from her prom, she plots a wicked revenge, but the victim will be "Carrie."

Back in 1976, Brian DePalma's film adaptation of Stephen King's first published novel was not only better than its source, but won Oscar nominations for its stars Sissy Spacek and Piper Laurie. Now director Kimberly Peirce (whose debut film "Boys Don't Cry" won the statuette for Hillary Swank) attempts an update, but despite a few fresh ideas (the screenplay is credited to the original's Lawrence D. Cohen and 'Glee' writer Roberto Aguirre-Sacasa), almost everything about this film is off. Let's begin with Chloë Grace Moretz ("Kick-Ass 2") who, while age appropriate to the role (Spacek was 26), doesn't capture the fear and loneliness the older actress brought to both school and home life. Moretz keeps her head down, her eyes shielded by a mop of unruly hair, but a wide eyed stare does not scream socially awkward outcast. Julianne Moore ("Don Jon") owns the film's best new twist, an opening birthing scene that introduces the film's menstrual blood and Margaret White's psychotic fundamentalism ('What is this cancer, Lord? she wails until she spies the baby that's emerged from her body), but the character's been made more outwardly normal here, along with the White's home, both detracting from Carrie's otherness status within the town. Much of the original dialogue has been lifted directly when it shouldn't have ('I can see your dirty pillows' worked coming from Laurie - now it's just laughable) while updates include technology but fail to address the subject of bullying in a modern context. Once the stage has been set - regretful Sue Snell (Gabriella Wilde, 2011's "The Three Musketeers") convincing boyfriend Tommy Ross (Ansel Elgort) to ask Carrie to the prom, Chris and boyfriend Billy Nolan (Alex Russell, "Chronicle") slaughtering a pig for its blood - the film skitters to its climax with little sense of dread (the stuffing of the ballot box to ensure Carrie takes the stage as Prom Queen is almost an afterthought, rather than part of a gathering storm). And as this Carrie spends a lot of screen time researching her gift of telekinesis, her climatic vengeance is physically focused rather than springing from emotional oppression. Even Carrie's punishment closet is a bland affair, only coming close to creepiness when Margaret shreds her fingertips trying to escape it (this Margaret White bangs her head against the wall and plunges sharp objects into her thigh). After the climax, which is so overly protracted it begins to bore (not to mention a glaring continuity problem), the film limps to its closure, Carrie's return to mom devoid of penance, their violent showdown lacking hysteria. There is little inspiration in the substitution for DePalma's classic coda. Wilde and Elgort fare OK as the only kids with a shred of sympathy and Doubleday's given a dad more willing to spend money than time, a good psychological factor, but the rest of the cast disappoint. Even the usually dependable Judy Greer lacks the warmth and concern Betty Buckley brought to Carrie's teacher. People always wonder why classics are remade, but the life of a teenager is considerably different since "Carrie" first hit screens. The real question is how filmmaker Peirce, who exhibited such a gift for conveying the tragedy of a teenaged outcast in her first film, could have bungled it so badly here.

Shy teenager Carrie White (Chloe Grace Moretz) has special powers but does not realize it. An outcast at her high school, she keeps to herself until one day, while showering after PT, she begins to bleed from her first period. This normal occurrence in a teen girl’s life is unknown to the naïve young girl and the terror it produces releases the power brewing within “Carrie.” Most everyone, especially Stephen King fans, are familiar with the Brian De Palma adaptation with Sissy Spacek as the title character and Piper Laurie as her religion-obsessed mother. That film also was a launch point for a number of young actors, including John Travolta, Amy Irving, Nancy Allen and the inimitable P.J. Soles. That film had a lot going for it, something the remake lacks. The screen writer for the ’76 adaptation of King’s novel, Lawrence D. Cohen, is also credited, with Roberto Aguirre-Sacasa, in this remake that pales in comparison to the original. Cohen should have his name removed from the credits so he cannot be blamed for this shallow copy of a classic horror story. The new “Carrie” begs the question: why? A remake should strive to be favorably compared to it original. Aside from the update to the special effects when Carrie goes ballistic at the prom, there is nothing new or different to offer here. Chloe Grace Moretz is too pretty for the Carrie character so a lot of the disdain from her fellow students seems manufactured. Julianne Moore, as Carrie’s bible-thumping fanatical Christian mother, gives a decent performance, though not the match for Piper Laurie’s scary performance in the original film.