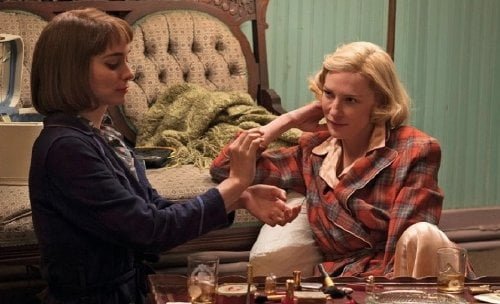 In 1950's New York City, aspiring photographer Therese Belivet (Rooney Mara) and her devoted boyfriend Richard Semco (Jake Lacy, "Obvious Child") both work at Frankenberg's department store, spending their down time with a circle of artists and young professionals. One day, as Therese mans the doll counter during the hectic holiday season, she is mesmerized by an older, worldly woman who seems flustered by her task. Therese steers her towards an offbeat choice for her little girl, an electric train set. Moments later, she sees the fine leather gloves left behind by "Carol."

This swoony period lipstick lesbian romance adapted from Patricia Highsmith's 'The Price of Salt' by Phyllis Nagy (TV's 'Mrs. Harris') is steeped in a NYC post-WWII glow (Cincinnati standing in, production design by "American Hustle's" Judy Becker), its characters and places similar to those of early 'Mad Men' days. Todd Haynes's ("I'm Not There.," HBO's 'Mildred Pierce') production is rich in nostalgic detail, his Audrey Hepburn-like Therese trying to define herself under the watchful eyes of his Greer Garson-like Carol, trying to disengage herself from an expected path already taken. And yet, with its autumnal color palette, French horn laden Carter Burwell score and story of forbidden love, there may be a sense of having gone down this road before with Haynes. Were those gloves left by accident? Given Carol's immediate intimacy, it would appear not, her reaction to Therese's return of her belongings an invitation to lunch (at Scotty's on Madison). The younger woman follows the older's lead yet is cautious. Carol notes her upcoming divorce to banker Harge Aird (Kyle Chandler) and extends a second invitation to visit her on Sunday, a day of Christmas preparations and marital discord, Harge suspicious of Therese's presence. There is his wife's more age appropriate best friend, Abby Gerhard (Sarah Paulson), the godmother of their daughter Rindy (Sadi and Kk Heim), whom he clearly dislikes, and we learn of a past relationship. Harge announces he's taking Rindy to spend Christmas with his family, then, once gone, delivers a surprising blow. Carol is served custody papers citing a morality clause and Harge is keeping Rindy until their hearing. Distraught, Carol extends her third, fateful, invitation for Therese to accompany her on a road trip. The movie may be called Carol and her story may be more melodramatic, but the film is Therese's coming of age tale. Mara keeps a serious countenance, yet shows youthful delight traveling to work on Richard's bike. Her hesitations let us know, though, that his dreams - travel to Europe, beginning a family - are not hers, even as their ambitions intertwine, mainly through the character of Dannie McElroy (John Magaro, "The Big Short"), a friend already ensconced at the New York Times. Haynes shows that others already recognize in Therese what she has yet to learn herself as she's eyed by a couple of women in a record store (later, at a party, she's circled by 'Portlandia's' Carrie Brownstein). Blanchett's performance reveals a character who already knows herself yet shrouds herself in societal convention. There is almost a hint of the predatory in her reaction to Therese, so focused and luring are her attentions. Paulson is the strong friend whose hidden feelings can be seen by us but not by Carol. Chandler retains sympathy as the man desperate to hang onto the woman he loves. Director of Photography Ed Lachman chose Super 16mm to attain a period feel, something the entire production excels in. Costume designer Sandy Powell drapes Blanchett in luxe fabrics, exquisitely tailored, while dressing Mara in more downmarket, but interesting looks befitting a young artist of good taste. "Carol" is simply gorgeous, yet I couldn't totally fall for it. Therese may find herself, yet has she really found Carol? These two women project their sexual attraction and a curiosity, but I never felt an intellectual communion between the two. It would be most intriguing to revisit them in the tumultuous 1960's. Grade: