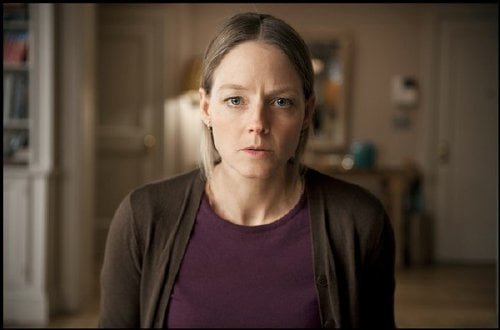 When lawyer Alan Cowan (Christoph Waltz, "Water for Elephants") and his investment banker wife Nancy (Kate Winslet) arrive at the Brooklyn apartment of Michael (John C. Reilly, "Cedar Rapids," "Terri") and Penelope Longstreet (Jodie Foster), they have no idea that this parents meeting to discuss an act of aggression their son committed against the Longstreets will turn into an all out battle of manners, class and deeply buried insecurities, in fact a "Carnage."

Cowriter (with 'God of Carnage' playwright Yasmina Reza)/director Roman Polanski brings the much ballyhooed European and Broadway play to the screen in a stagebound adaptation with a terrific cast who try their best to sell contrived material obviously indebted to "Who's Afraid of Virginia Woolf?" There are some laughs to be had, especially from Waltz's rude cell phone use and bating common sense tactics, but if these people keep wondering why they're in the same room together those watching may start laughing for the wrong reason - disbelief. Penelope is obviously a very high strung individual with a chip on her soldier and Foster plays her fiercely, at least until she goes so over the top she's practically sputtering. Here is a woman who works in a book store, whose husband has made them a comfortable living as a bathroom hardware salesman, but she aspires to the Bohemian intellectual world (she's writing a book on Darfur) and is keenly aware that the people whose son knocked out her own's teeth are on a different social strata than she. (Much is made of a vase of yellow tulips gracing the center of her living room - when complimented she's only too eager to offer the florist and offhandedly disclose the too-high price.) For the most part, it is Penelope pitted against Alan, who has no fear calling a spade a spade and clearly thinks the whole matter has been overblown. He wins their first match, as Penelope admits that the use of the word 'armed' in describing the Zachary Cowan's (Elvis Polanski) holding a stick in her typed account of his and Ethan's (Eliot Berger) conflict is overkill and changes it. In the background, at least initially, are Penelope's Everyman husband Michael, a genial schlub who, we learn as the day progresses, is well aware of his wife's pretensions as well as Alan Cowan's superiority complex. As Nancy Cowan, Kate winslet is in the Sandy Dennis role, the meak wife who starts spitting fire (and vomit) under the influence of Scotch. And here is one of this film's (and, I would assume, the play's) problems - these people clearly would not socialize under normal circumstances, yet the Cowans depart not once, but twice, only to be reeled back into the apartment, first on the promise of a better cup of coffee and later because of a barking dog on the landing. Why would the Longstreets, who have been insulted by Alan, pull out aged Scotch? Because it feeds the outrageousness of these characters and only that. After finally speaking up, Nancy (and here Winslet resembles not only Dennis, but Eileen Heckart's Hortense Daigle in "The Bad Seed," another stagey, campy film) doesn't feel so well and promptly vomits all over Penelope's displayed art books. The horror! Polanski gets the biggest laugh when he finally pulls his camera out of the apartment to reveal a happy plot device and an ironic visual expression of the exaggeration of the Longstreets' concern. Cinematographer Pawel Edelman ("The Pianist," "The Ghost Writer") does what he can to open up the one apartment setting (the film's prologue and coda both take place in a long shot of Brooklyn Bridge Park) and the light streaming in adds life to the proceedings, however one shot indicates dusk where the next rolls back daylight. Original Music by Alexandre Desplat ("The Tree of Life," "The Ides of March") begins with a tribal battle cry as we see one boy attack the other (Alan describes the God of Carnage concept by using a modern day example from the Congo where eight year old boys are trained to kill.) It can be amusing watching Waltz egg on Foster's apoplectic indignation, but Winslet's repeated return to concerns over a hamster just aren't credible no matter the actress's embracement of her milquetoast character. "Carnage" can be funny, but it's contrived and relentless.

Two young boys get into an after school fight and one boy strikes the other with a stick and knocks out several teeth. The Longstreets, parents of the injured boy, ask to meet the Cowans to cordially sort out what prompted the seemingly bully attack. But, this amiable meeting will spin out of control into drunken confrontation that becomes “Carnage.” Think “Who’s Afraid of Virginia Wolfe?” but not nearly as good. That Oscar winning tome was the film directing debut by Mike Nichols. “Carnage” has internationally-renowned helmer Roman Polanski. How can that fail? And, it has four multi award winning actors with Jody Foster and John C. Reilly as the Longstreets and Kate Winslet and Christoph Waltz as the Cowans. (“WAoVW?” showcased Elizabeth Taylor (in her best performance ever), hubby Richard Burton, George Segal and Sandy Dennis, all in riveting perfs.) The 1967 Oscar winner had more going for it – a script with outrageous yet believable characters whose lives inexorably unravel as their civilized dinner party degenerates into a drunken brawl with souls bared and feelings crushed. “Carnage,” based on Yasmina Reza’s play “God of Carnage,” is a low rent version, despite its pedigree stars, of adult angst and confrontation. The characters and their actions do not ring true (the Cowans, throughout the story, keep saying they must leave but never do) and the decision to drink (to excess) is also forced. The players are two sides of the same coin with both sets of parents blaming the other’s son for starting the “fight.” Right and wrong are blurred as far as the boys are concerned but also in the alcohol-hazed eyes of their parents. Of the four, Kate Winslet gives the most grounded performance as the (almost) voice of reason. Christoph Waltz is saddled with the role of an obnoxious businessman who is always on his cell as the couples’ conflict accelerates. Jody Foster is shrill as the righteous mother of the beaten boy and John C. Reilly is simply not convincing as her placatory husband. The stage play origins are obvious in the stodgy, one set shoot that makes the film feel claustrophobic. At least “Virginia Wolfe” went outside for a while. This is the most mundane effort I have seen from the stars and their director.