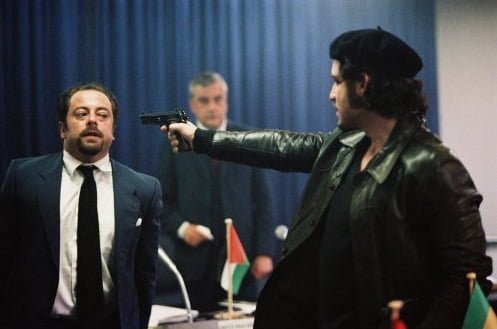 In December, 1975, Ilich Ramírez Sánchez (Édgar Ramírez, "Vantage Point") led a 6 person team and assaulted an OPEC meeting in Vienna, killing 3 and taking 60 hostages. A plane was provided, flying the terrorists and hostages to Algiers, then Baghdad and Tripoli, before returning to Algiers where they were granted asylum. But Sánchez's mission for the Popular Front for the Liberation of Palestine (PFLP) had been to execute two OPEC officials and, as he had released all his hostages in exchange for millions, he was expelled from the group who had given him the name "Carlos."

After a proliferation of suicide bomber films ("The Terrorist," "Paradise Now," "Day Night Day Night"), the recent terrorism thriller subgenre has gone retro, first with "The Baader Meinhof Complex" and now with "Carlos," a researched recreation of the terrorist who was dubbed 'The Jackal' by the press when the Fredrick Forsyth novel "The Day of the Jackal" was published. Prolific and eclectic cowriter(with television writer Dan Franck/director Olivier Assayas ("Summer Hours"), who has covered genres from literary period adaptations to cyberpunk, now takes a shot at the television miniseries with the 3 part 5 1/2 hour "Carlos," which IFC is also distributing theatrically and via VOD in a 165 minute version. This review is based upon the full, 330 minute version. Unlike Uli Edel's "The Baader Meinhof Complex," Assayas's film concentrates on one man's journey through revolutionary groups, but like that film, can be difficult to follow due to all the characters being thrown at us fast and furiously (the two prominent women in the film, Julia Hummer's ("The State I Am In") Nada and Nora von Waldstätten's Magdalena Kopp, are both thin, pale, pretty and sport the same hairstyles). But where Edel's film was grounded in the events that gave rise to the terrorist group he documents, Assayas jumps right in with Sanchez taking his code name after being accepted into the PFLP by Wadie Haddad (Ahmad Kaabour) in 1973. As played by Edgar Ramirez, Ilich/Carlos exhibits ego and a chauvinistic attitude towards women (shades of Andreas Baader), but the performance is also opaque as regards his emotional underpinnings. The film was shot in a 2.35:1 aspect ratio, but has the look of a quality television production. Part one gives a quick fire history of Carlos's beginnings with the PFLP, leading up to his betrayal by his Parisian counterpart Andre and his shooting of two French policemen and a terrorist traitor, at Rue Toullier, the crimes for which he would eventually be imprisoned over twenty years later. It culminates with the approach of Carlos's team to the Vienna OPEC meeting. Part two is largely given over to the OPEC mission which made his name, but also proved his undoing with Haddad and his team. Carlos made mistakes which forced him into a corner with Moammar Qadaffi, who refused to help him, and the Algerians, who offered the millions Carlos accepted in lieu of completing his mission. The episode closes with Wadie's expulsion of Carlos with well delivered lectures on obeying orders and not understanding politics. However, the team Haddad put in Carlos's place are killed by the Israelis after taking hostages on an Air France Airbus and a transition of power from the dying Haddad to the new group Carlos assembles with Johannes Weinrich (Alexander Scheer), backed by Baghdad and Syria, follows. At a meeting which includes Haddad, Carlos considers a request from the KGB to assassinate Anwar Sadat, whom they claim has betrayed their former loyalty by 'bowing to American Imperialism,' but Haddad sharply warns that he is not in the business of taking out Arab leaders. Carlos's former idealism is becoming muddied as a gun for hire. In a subplot which outlines how leaving the revolutionary life is like trying to exit the Mafia, Carlos's former right-hand man 'Angie' (Christoph Bach), protesting the anti-Semitism exhibited by the Pro-Palestinians, sends his revolver to German magazine Der Spiegel and goes on the run. Angie is a symbol of idealism betrayed. For all the action and intensity of the OPEC hostage situation in Part Two, I found Part Three, in which Carlos becomes irrelevant while living a bourgeois life in Budapest, to be the most fascinating. His wife, Magdalena, is tired of being kept and is sent into the field with another colleague, where they are set up and captured by French authorities. After over three years in prison, she returns only for us to hear Carlos describe her as a German petit bourgeois (this from a man who later has liposuction)! A change in the political landscape, rocked by the fall of the Berlin Wall and disintegration of the Soviet Union, finds Carlos suddenly persona non grata wherever he turns. He ends up in Khartoum, now claiming the Muslim cause and a new wife, but he's identified by his former soldier Ali and finally taken by the French. The C.I.A. can't even be bothered. The final act of the film is a little disjointed, frequently edited by omission (we see the beginning and end of action, but often not the action itself, or we're shown strands that unravel into a black hole), but Assayas's use of post punk music fits his style. This epic look at terrorism on a global stage as seen through the eyes of a Marxist who views himself a demigod, but who, in fact, is more correctly ID'ed as a delusional celebrity, is a wild ride through two decades of shifting political winds.