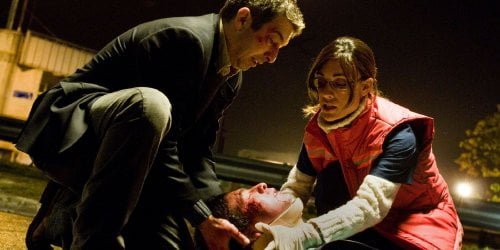 Traffic accidents are at epidemic proportions in Argentina and litigation is a way of life. Sosa (Ricardo Darin) lost his license to practice law and makes ends meet by taking money under the table helping accident victims with their lawsuits. Lujan (Martina Gusman) is an EMT doctor who responds to an emergency call where she crosses paths with Sosa and she finds herself attracted to the man. But, life takes unexpected turns for the star-crossed couple in “Carancho.”

Luján (Martina Gusman, Lion's Den) is a young doctor from the country, now having to practice in the ER and ambulance teams for debilitating hours in order to make it in Buenos Aires. She's hiding a drug problem when she meets accident lawyer Sosa (Ricardo Darín, The Secret in Their Eyes), but as the two fall into a relationship she finds out he's hiding a secret of his own, participating in a corrupt insurance racket while still trying to help those in need as an ambulance chaser, a handsome vulture, a "Carancho." Argentina's selection for the 2011 Foreign Language Oscar competition comes from cowriter (with prior collaborators Alejandro Fadel, Martín Mauregui, & Santiago Mitre)/director Pablo Trapero ("Crane World") who has made his career exploring human rights issues. This twisty noir suffers a bit from the very seediness of its environs, playing like popcorn than art house cinema, but popular star Darín keeps things grounded and Trapero ties things up on a high note, an ironic twist of fate that is breathtaking in its abruptness. The link between Luján and Sosa is Pico (Fabio Ronzano), the ambulance driver who sets up jobs with Sosa (poor clients are purposefully injured to collect) and who got Luján her job as the sister of a friend. Sosa's trying to regain his license and is held in the sway of the 'foundation,' which uses him to act as a victim's defense and collect their money, usually far less than they have paid to be insured. He's trying desperately to get out from under their thumb. Luján is goaded by a heartless superior to pick up more shifts and work more overtime. It is not until the film is well underway that we understand the meaning of Trapero's first shot, that in trying to not go under in the big city, Luján has become one of its walking dead, a junkie. She learns Sosa's secret when she's teamed with Pico who 'responds' to a call they've never gotten. Sosa has 'helped' a friend by taking a sledgehammer to his leg so Vegas could fake a car accident (it is the car accident that drives all here, the highest cause of death in Argentina at 22 people per day) and his presence there is all it takes for his lover to put two and two together. He learns her secret later on, after she has become the victim of his boss Casal (José Luis Arias). These two are lost souls drowning in a corrupt system. Cinematographer Julian Apezteguia creates isolated worlds within cars, the exterior a hostile environment speeding by. The film almost exclusively takes place at night or in drab interior spaces. One exception is a Quinceañera Luján is invited to by a patient - although she is exhausted, she and Sosa attend, trying to maintain their connection to the people they are given so many obstacles in helping. "Carancho" tips into melodrama with characters so desperate they are driven to extremes, but that's noir territory. It's an entertaining, albeit disturbing, ride with a helluva final destination.

Veteran Argentine writer-director Pablo Trapero delves into a lifestyle in his home land that thrives on the growing number of traffic accident in the country and, subsequently, the litigations that follow. This world is seen through the eyes of Sosa and Lujan but from very different viewpoints. For him, the rising number of lawsuits in the country means income, especially since he cannot legally practice law. For her, it is job security as the ever increasing accident toll keeps the EMT business hopping. She also needs the job to help her keep up with her drug habit. Trapero joins these two troubled and lonely people as Sosa plans a car accident to help a needy friend. Things go tragically wrong, though, and Lujan is aboard the ambulance that responds to the accident. His sensitivity and compassion for his badly injured friend is palpably to Lujan, as is her kindness and dedication to her patients for him. However, each of their secret lives will come between them even as they fall for each other. However, this is not just about a stormy romance. It also deals with personal integrity, or lack there of, corruption within the Argentine insurance industry and the violence that it spawns. Both personal drama and social commentary bind together as Sosa and Lujan find each other. Ricardo Darin, with his sad, soulful eyes evokes sympathy despite his unseemly make-a-buck life. Martina Gusman also gets your empathy as she plies her honorable trade but also uses it, selling bootleg prescription pads to feed her addiction. “Carancho” belongs to these actors.