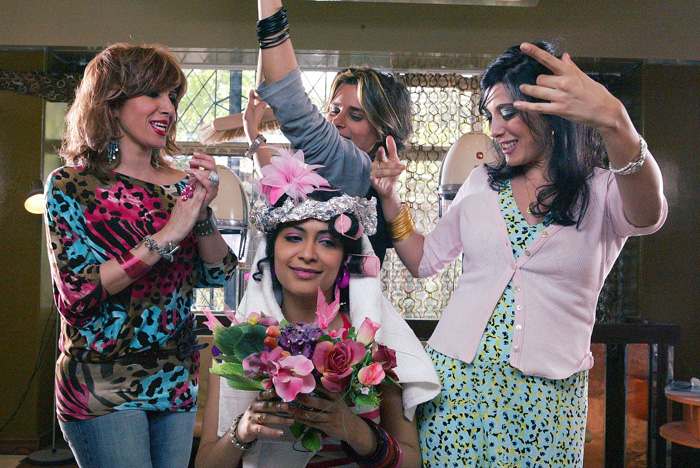 In modern day Beirut, five women of three generations support each other as each looks for her way through love, religion and a society at once free and restrictive. Director/star Nadine Labaki is the thirty year-old single owner of the beauty salon where these women can be themselves as they style their hair and prepare the mixture of sugar, lemon and water that removes unwanted hair, "Caramel."

This Lebanese submission for the Foreign Language Film Oscar might sound like a sitcomish retread of France's "Venus Beauty Institute," but Labaki's film, like its name, is something warmer and more soulful. It will be astonishing for most to discover that her cast is comprised completely of nonprofessionals, so alive and distinct do each of the actresses make her character. Labaki's film is also generous towards its male characters - even the unseen married lover who will not leave his wife for Layale (Labaki) can almost be forgiven for the fine family we eventually glimpse. We're introduced to Layale responding to 'the horn,' the rude blast that is the mating call of her married lover Rahib that she guiltily responds to while her salon buzzes on. As she heads to her car, she finds batty old Lili (Aziza Semaan) collecting any paper she can find and returns her to her sister, neighboring seamstress Rose (Sihame Haddad), with a new prize. She also catches the eye of handsome cop Youssef (Adel Karam), who pulls her over for a seat belt violation but fails to fine her. We later discover Layale's guilt is of the Catholic variety, when she lies about her whereabouts to the parents she still lives with. Meanwhile, Muslim stylist Nisrine (Yasmine Elmasri) has her own run in with a cop of sorts when a Lebanese solider questions the decency of her late night conversation with fiance Bassam (Ismaïl Antar) in a parked car. Bassam's rebelliousness lands him in jail, but the event necessitates the escalation of wedding plans and Nisrine's guilt is laid bare - she is not a virgin and virginity will be expected by a Muslim husband. As Nisrine prepares a new identity to undergo surgery to restore her hymen, salon client Jamale (Gisèle Aouad) engineers menstrual accidents to deny menopause and retain her youth. Spunky, punky hairwasher Rima (Joanna Moukarzel, resembling a younger, prettier Amy Sedaris) rides on the back of Johnny Bravo's bike, but is obviously attracted to the traditional beauty of an unnamed client (Fatmeh Safa) who responds in kind. Next door, dowdy 'Auntie' Rose is embarrassed by Lili's behavior as she attends to the courtly elder gentleman, Charles (Dimitri Staneofski), who requests the hems of his pants legs be made ever shorter. Labaki has crafted her film with great care, raising it a level above the typical romantic sisterhood dramadies turned out by American majors even while following some genre conventions. In the film's best scene, Layale peeps through the blinds of her salon while laughing with Rahib on the phone as Youssef also answers her while drinking coffee from his cafe vantage point across the street - it's choreographed like a musical and positively lifts the spirits. Equally fine is the liberation of Rima's client, shedding her traditional long, black hair for a sexy short cut, delighting at her reflection in shop mirrors, practically dancing down the street. Youssef's encounter with the caramel is a delicious surprise and his late act dance with Layale as sensuous as Riba's washing of her client's hair. The only politics that come into play in "Caramel" are religious and societal, like Nisrine's predicament and Layale's attempt to procure a hotel room without an ID proving she is married (she eventually procures a room she must scrub from top to bottom, but when Rahib fails to show for their 'anniversary,' Nisrine, Jamale and Rima do). The lousy cake she has made is critiqued by Jamale and then that scene is stood on its head when Layale clandestinely visits Rahib's home only to find his adoring wife Christine (Fadia Stella, touching in her innocence) preparing the same kind of party with better baking expertise. When poor Aunt Rose finally succumbs to some sprucing up to respond to Charles's invitation, she finds she cannot put her own happiness before that of Lili's (per the press notes, Lebanese culture frowns on newfound romantic relationships for those of a certain age and Labaki's dedication 'For my Beirut' over her last shot of Rose and Lili walking down a street is wonderfully nostalgic and melancholy and sisterhood defined). "Caramel" is warmly shot by Yves Sehnaoui, who frequently frames his subjects through doorways and in mirrors. Original music by Labaki's fiance, Khaled Mouzannar is made original by its mix of tradition with outside influences.