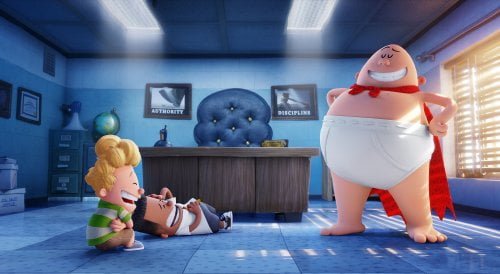 George (Kevin Hart) and Harold (Thomas Middleditch) have been best friends and pranksters all of their young lives, ever since kindergarten. They have a nemesis in their quest for fun, though: the un-fun loving Principal Krupp (Ed Helms). When brought, once again, before Krupp for yet another prank, George uses his Hypno-ring on the unsuspecting educator and turns him into their own comic book hero invention, the enthusiastic but none-too-bright “Captain Underpants: The First Epic Movie.”

Best friends since they discovered their shared sense of humor, George Beard (voice of Kevin Hart) and Harold Hutchins (voice of Verizon pitchman Thomas Middleditch, HBO's 'Silicon Valley') love to play pranks in school before heading off to George's tree house where they cocreate a series of comic books. When their angry principal Mr. Krupp (voice of Ed Helms) threatens to separate the boys into two different fourth grade classes, George pulls out his Hypno-Ring and the boys are giddy to discover Krupps is in their power. But when they decide to suggest he's the hero of their comics, the boys battle to control the exploits of "Captain Underpants: The First Epic Movie." Tra-La-Laaa! This positively delightful adaptation of Dav Pilkey's book series (screenplay by Nicholas Stoller, "The Muppets," "Storks") celebrates friendship and creativity with such heart and joy, even its constant stream of toilet humor works. Here is an animation whose protagonists click over a shared 'Uranus' classroom chuckle, their creation an adult man in tighty whities, their science teacher determined to wipe out the source of laughter in children's brains (the Huffaguffawchuckleamulus) because the Nobel Prize committee laughed at his name (Pee-Pee Diarrheastein Poopypants Esquire). Director David Soren's ("Turbo") production switches up its visuals, the main story told with simple CGI characters with elaborate textural hair, the boys' comics leaping off the page with crude hand drawn animation, Flip-O-Rama sequences honoring the earliest form of animation. All that and a live action sock puppet sequence! Krupp has been trying to determine the source of high level pranking at Jerome Horowitz Elementary for some time and fourth grade suckup Melvin Sneedly's (voice of Jordan Peele) Tattle Turtle 200 gives him the evidence he seeks. When George and Harold enter his office, they're greeted with their enraged principal, signs promoting 'Discipline' and 'Authority' over each shoulder, a big, red button on his desk (sound like anyone we know?). His rundown of the boys' crimes is accompanied by a hilarious montage the lads themselves seem to enjoy, another of Soren's unique twists giving them a hand in the filmmaking itself. But once George and Harold have enjoyed Krupp's transformation into their dimwitted super hero, they realize they are responsible for his actions. Discovering that water is the antidote to Krupp's hypnosis, they can flip his personality at will (and do so over and over in a true test of Helms's vocal flip-flopping talent). With Professor Poopypants (voice of Nick Kroll, "Loving") utilizing Melvin's Turbo Toilet 2000 to wipe out fun, it's Captain Underpants to the rescue. Hart and Middleditch throw themselves into the film's spirit, Hart's George the aggressive writer, Middleditch's Harold the more cautious artist. Kristen Schaal voices Edith, the lovelorn lunch lady the boys recognize as the cure to Krupp's anger. Doing double duty, Helms creates two entirely different characters. The entire cast commits to what is portrayed on screen, none of them readily recognizable as 'celebrity' voices. In jokes and throwaway gags abound. When an upcoming scene appears budget blowing, the boys explain that and insert one of their flip books. Rotten Tomato scores and critics' quotes pop on screen. Names of people and places embrace punning silliness. "Captain Underpants: The First Epic Movie" is the best kids' movie to embrace creativity over rules since "The Lego Movie." It's simply delightful. Grade:

There are several kinds of animated movies: those for just kids (“My Little Pony”), those for parents with kids (“Trolls”), and those for the rest of us (and kids, too). “Captain Underpants” is, to me, firmly the in the latter category. Director David Soren, with Nicholas Stoller’s adaptation of the Dav Pilkey “epic” novels, achieves a funny-on-many-levels, modestly subversive tale about two exceptional boys who just want to have fun. Principal Krupp has made it his mission to separate the jolly pranksters, put them in separate classes and break up the friendship that has plagued him for years. Their latest, greatest prank is the final straw and Krupp means to finally break them up for good. George, in a final, desperate bid to stop the nefarious plan, brings out the Hypno-ring (the prize in a box of cereal) and, to the boys’ surprise, it works! Captain Underpants is born. Reading about the Captain Underpants books, a 12-book series on the misadventures and pranks of 4th graders George and Harold, I can see the goldmine that the filmmakers have just begun to tap. There is a lot going on during “Captain Underpants” with a mad scientist, Professor Pippy Pee-Pee Poopypants (Nick Kroll), as the school’s new science teacher who invents shrink/large ray gun. I laughed heartily at that name and the kids in the audience did, too. But there is much more besides heroes and villains. There is also the Turbo-Toilet 2000, an invention gone wrong because of the aforementioned ray gun, wreaking havoc on the town. There is a budding love interest involving Lunch Lady Edith (Kristen Schall), but I will leave at that for the romantics out there. All of this is bound by the boys’ fight against evil to keep fun alive. “Captain Underpants” does just that. Have fun!