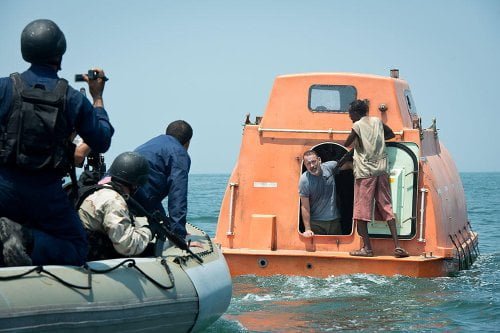 The container ship, Maersk Alabama, commanded by Richard Phillips (Tom Hanks), is en route to Mombasa, Kenya by way of the Gulf of Aden off the coast of Somalia. Four armed pirates in a fast boat approach the ship and the captain orders that the boarders be repelled. But, without weapons to defend the ship, the pirates are able to board and take, as their ransom hostage, “Captain Phillips.”

In 2009 Captain Richard Phillips (Tom Hanks) discussed the tough road their college educated son would have in fast-changing, precarious economic times with his wife, Andrea (Catherine Keener, "Enough Said"), as he drove to the Burlington, VT airport. Meanwhile, in Somalia, former fisherman Muse (Barkhad Abdi) is picking a pirate crew to overtake a ship for the ransom money demanded by a local warlord. When these men cross paths in Somali waters, a high stakes game of psychological bartering ensues, but the unarmed man is "Captain Phillips." Director Paul Greengrass's filmography consists of docudramas chronicling real life events (the massacre of Irish civilians by the British Army in "Bloody Sunday," the 9/11 drama "United 93") and thrillers like "The Bourne Ultimatum." With "Captain Phillips," he tells a real life tale with thriller elements while contrasting the privileged Western world with the desperate measures Third World residents are driven to to achieve parity. But these two agendas don't course evenly throughout the film, rendering it neither fish nor fowl. It's a good, often thoughtful film boasting a compassionate performance from Tom Hanks and a breakout one from Abdi, but despite its tense real life events, "Captain Phillips'" impact is late breaking. After the Vermont set opener, the contrast of Phillips' work environment is jolting, a sun-bleached dock full of cargo containers. The captain immediately notes an unlocked stair passage on the Maersk Alabama and no sooner have they set to sea than he orders a multi-level safety drill. Before it's even over, skiffs are seen approaching. This begins a game of wits between Phillips and the pirates, the upper hand constantly shifting. Just when Phillips seems to have resolved his pirate takeover with little violence or economic impact to his employer, he makes a tactical mistake and the pirates end up ransoming him rather than his ship. And it is here, where the thriller elements ramp up as Navy ships arrive, that the personal diplomacy between Phillips and Muse which fuels the first two acts is largely lost, Muse disappearing for a major segment of running time, Phillips left with the hotheaded Najee (Faysal Ahmed), over-his-head teenaged Bilal (Barkhad Abdirahman) and largely uncommunicative boat driver Elmi (Mahat M. Ali). Greengrass and screenwriter Billy Ray ("The Hunger Games") lay down some interesting psychological groundwork, only to largely abandon it as the film progresses. The filmmakers and their cast do a subtle job establishing a slight undercurrent of resentment from the Maersk crew for their by-the-book captain, but it never goes anywhere and the crew is forgotten once Phillips is held on his own lifeboat. Similarly, it is noted that Najee, the pirate most inclined to violence, is not from the same village as the others, but just what this means and how it affects their dynamics is left unexplored. We get inklings of Phillips' dawning awareness of Muse's predicament, his horror at the ramifications of Bilal's participation, but the overall tragedy of the film's climax may be lost on many, the U.S. military operation dominating, even as Hanks almost single-handedly drives focus back to it. Earlier this year, the fictional Danish "A Hijacking" took a slightly different approach to similar subject matter with more devastating results. Greengrass's globalization subtext is admirable, but gets overtaken by "Captain Phillips'" commercial thriller elements.

Director Paul Greengrass and Tom Hanks work together for the first time on this true life story of 21st century pirates, adapted for the screen by Billy Ray from the book A Captain's Duty: Somali Pirates, Navy SEALS, and Dangerous Days at Sea, by Captain Richard Phillips and Stephan Talty. This collaboration proves to be a good, though not great, recreation of the harrowing events the titular captain faced in his kidnapping by four Somali pirates. Things start off as “just another day” for Richard Phillips as he packs his bags and kisses his wife, Andrea (Catherine Keener), goodbye. He boards his ship, the American-owned Maersk Alabama, and, knowing where they are heading, inspects his ship for security precautions, which are lax. His first act as ship’s captain is to order his men to tighten up the anti-pirate measures and prepare to set sail. All is routine for the crew of the Alabama until Captain Phillips spots two small blips on the ship’s radar. The fast-moving dots are heading directly for them and the captain orders his team to anti-boarding stations to repel the pirates while he maneuvers to evade the invaders. This first attack fails but, later, the persistent pirates, led by Muse (Barkhad Abdi), finally succeed and hold the bridge crew at gunpoint. Muse, with the captain’s “help,” begins to search the ship to find the rest of the crew that Phillips previously ordered to lock down and evade the pirates. The nerve-wracking events that follow are punctuated with the meaty part of Phillips’s story, when he is taken hostage and he and the four Somali pirates escape the stranded Alabama in an emergency life boat. This begins a slow-speed chase by US Navy warships as a SEAL team heads to end the hostage crisis. As we all know, Richard Phillips survived his ordeal, so the film takes on a more plodding tempo as it moves to its only possible conclusion. I am sure that there is going to be a bunch of award buzz for Tom Hanks but his performance, like the film, is good, not great. The actor, as we have come to expect, inhabits his everyman character convincingly. Barkhad Abdi, as Muse, the head pirate, makes his acting debut and is exceptional as a man who, like the rest of the Somali pirates, attacks giant cargo vessels for money, not politics. Theirs is an act of survival and not that of terrorists. Abdi has natural charisma on the screen and, while you may not empathize with his character’s actions, you sympathize with him. The rest of the cast do well enough in their supporting roles but these characters are not as strongly defined as Phillips and Muse. The filmmakers adhere closely to the source material and Greengrass does his usual solid job behind the camera and tells the captain’s story honestly. Techs are also solid, giving the film a you-are-there feel. Cinematographer Barry Ackroyd combines wide screen action of the pirating of the Alabama with close up photography which dominates the last third of the film, shot mostly in the confines of the enclosed life boat. “Captain Phillips” is good Hollywood entertainment that does not embellish on the actual events that occurred and tells what happened in a straightforward manner.