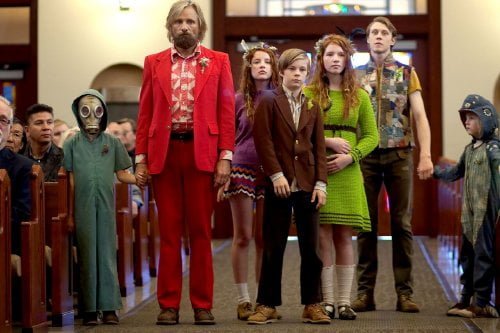 In the Pacific Northwest, Ben Cash (Viggo Mortensen) is raising his six children in off the grid self sufficiency. But when he acquiesces to his conservative father-in-law Jack's (Frank Langella) demand that he not attend his wife Leslie's (Trin Miller) funeral in New Mexico, there is a family rebellion, the children intent on making sure mom's wishes are upheld. Ben's parenting will come into question as they venture out into the world in "Captain Fantastic."

Surely this is a contender for the best of 2016 I thought, engrossed in the story of the Cash family. Then writer/director Matt Ross ("28 Hotel Rooms") stumbles badly in his third act, throwing logic to the winds to get where he wants to go. It's an inexplicable flaw in such an intelligently written and directed film, one which keeps it from achieving the greatness it had within grasp. Still, this deeply humanistic conflict between uncompromising idealism and real world truths is thought provoking, moving and often humorous. Mortensen has found his definitive role while up-and-comer George MacKay (2014's "Pride") gives a breakthrough performance as Ben's 18 year-old son Bodevan. The film opens with a scene reminiscent of John Boorman's "The Emerald Forest." We see a stag in a forest, then a young man in camouflage face paint within the trees. He tackles the buck, slaughtering it with a knife. Then his five siblings and father gather around from their various hiding places. Dad tells Bodevan he is now a man. When they return to their home, it is an impressive camp with a garden, greenhouse, cistern and sewing room (production design by Russell Barnes, "We Are What We Are"). Their days consist of rigorous physical training, learning survival skills and intensely intellectual, left wing home schooling (Ben calls his brood 'philosopher kings'). At night, entertainment consists of music around the fire, where rebellious 12 year-old Rellian's (Nicholas Hamilton, "Strangerland") heavy board beat turns dad's guitar strumming into a rousing family jam, or reading challenging classics. Everything seems ideal, but this brood is missing their mother and Bodevan is hiding acceptance letters from Ivy League colleges. On a supply run trip into town, Ben calls his sister Harper (Kathryn Hahn, "This Is Where I Leave You") to check on Leslie and is stunned to learn of her death at her own hand (as the movie progresses we will learn more about the matriarch and her relationship with her husband). Although the entire family believes that their mom's dad Jack (Frank Langella) is 'a Fascist,' they board the family school bus and head southeast. Along the way, they will shoplift food, repel a cop with a Jesus offensive and celebrate an early' Noam Chomsky Day,' Ben's version of Christmas, in his attempt to boost flagging morale. Bodevan mistakes his first encounter with a flirtatious female, Claire (Erin Moriarty, "The Kings of Summer"), as true love, his awkward naivete both painful and endearing. A stop at Harper and Dave's (Steve Zahn, HBO's 'Treme') begins the parenting debate in earnest, Ben's matter-of-fact discussion of his wife's suicide considered inappropriate for children by his sister. Yet her charge on their unorthodox schooling is turned on its head, her children woefully ignorant about basic U.S. History while his youngest can recite and interpret the Bill of Rights. The battle becomes more militant with Jack and his more sympathetic wife Abigail (Ann Dowd, HBO's 'The Leftovers'), their sprawling, gated community home bordering a golf course a symbol of everything Ben despises. Marching into Leslie's funeral in a cherry red suit, Ben and his kids seem dropped in from Mars. Abigail shushes her husband's agitation, but Ben boldly stands to decry the service, stating that his wife was against organized religion and had wanted a Buddhist cremation. Jack, who believes Ben is responsible for Leslie's death, proceeds with her burial. Things come to a head when Rellian's rebellion reaches fever pitch. He says he's staying with his grandfather. Incensed, Ben sends in one of the twins, but 15 year-old Kielyr (Samantha Isler, CW's 'Supernatural') has an accident scrambling across the roof, foreshadowed earlier with Rellian during a rock climbing incident. Ben's eyes are opened - his ways have been endangering his kids. He decides to leave them all with their grandparents. That decision alone is startling, but at least it can be partially attributed to grief (Leslie's been coming to Ben in his dreams). What follows certainly has a quirky charm, an unorthodox 'happy ending,' but by leaving out Jack's involvement it's also a bit of a fairy tale. Ross, most well known for playing bad guys in HBO's 'Big Love' and 'Silicon Valley,' has made one hell of a movie, leaving no stone unturned in his sweeping philosophical debate. Two bull headed men clash, their women bearing the scars of the battle. It's a more benevolent, relatable and realistic twist on Peter weir's "The Mosquito Coast." Mortensen carries the film as the loving family man so resolute in his principles he's cut his family off from real world experience. He plays marvelously with Langella, whose rage is softened in the face of his son-in-law's palpable grief. MacKay is evidence of Ben's shortcomings with his inability to socialize - he's the smartest kid in the room with no idea what 'Star Trek' is, a nerd with the body of an elite athlete. In addition to the top rate production design, costume designer Courtney Hoffman ("The Hateful Eight") creates the perfect mishmash of homemade and store bought apparel for the Cash crew. 7 year-old Nai (Charlie Shotwell) is a budding nudist in a gas mask. Music is also integral, a song penned by Mortensen and MacKay, 'El Hilo de Ariadna,' performed by all. We're also treated to 'Uncle Noam,' 'Scotland the Brave,' ethereal pop, classical and Bob Dylan. 'Sweet Child O' Mine' is a stunning choice for the penultimate scene. "Captain Fantastic" is richly rewarding despite its flaws. It's the best kind of movie, one that gives you a foreign experience and entertains while making you think. Grade: