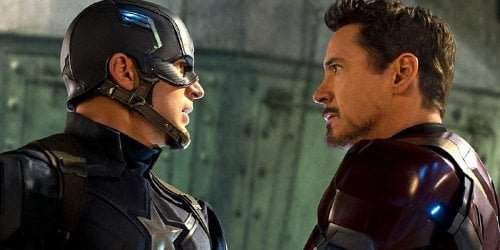 After his old buddy Bucky Barnes (Sebastian Stan), remade as Hydra's Winter Soldier, is falsely accused of a terrorist act, Steve Rogers (Chris Evans) finds his loyalties to his friend stronger than to Iron Man's (Robert Downey Jr.) guilt-driven upholding of the Sokovia Accords put in place to regulate The Avengers. Lines are drawn among the former allies in "Captain America: Civil War."

While this is one of the better Marvel efforts, Marvel and others are creating serious Super Hero fatigue. How many times can we see the same basic themes writ large? The Patriot Act and modern war technology have become the de rigeur political catalysts and brooding hunks wrestling with the deaths of mommy and daddy have gotten a real workout. First it was DC's Batman versus Superman, now it's Marvel's civil War, both film's posters featuring two 'good guys' facing each other down. And as if we haven't seen the death of Batman's parents ad infinitum, "Civil War" features parental vengeance times two. Directors Anthony and Joe Russo ("Captain America: Winter Soldier") certainly show better aptitude for this sort of thing than Zack Snyder, but both of their latest deal with the collateral damage of bigger than life characters smashing things up to save the day causing a divide before a reunification against a common foe. In the case of CACW, trouble begins to brew in Lagos, where Captain America is battling baddies with other Avengers, including Scarlet Witch (Elizabeth Olsen), who is still learning to control her power. Her death blow incorporates several floors of an inhabited building, causing Secretary of State Thaddeus Ross (William Hurt) and the UN to propose the Sokovia Accords (see "The Avengers: Age of Ultron"). Tony Stark, battling his own demons amidst a freeze-out from Pepper Potts, is all in, but just when he's convinced Rogers signing is the way to go, Cap learns that Wanda's being held 'for safety' by Vision (Paul Bettany). Things escalate when the King of Wakanda is killed in a bombing at the UN Accords meeting in Vienna and the Winter Soldier is fingered as the culprit. In one of the film's best scenes, we see Vision caring for the stricken Wanda, a philosophical discussion full of compassion, if, obviously, on the side of Stark. Wanda's breakout begins a series of apologies made from one Avenger to another as sides are drawn, Lieutenant James Rhodes (Don Cheadle) standing with Stark, who also recruits the fledgling Spider-Man (Tom Holland, "The Impossible," breathing new, golly-gee-whiz life into the character) much to the delight of Peter's besotted aunt (Marisa Tomei). Black Widow (Scarlett Johansson) neatly keeps one foot on either side of the line, siding with the Accord, but assisting those who oppose it. The new King of Wakanda, T'Challa (Chadwick Boseman, "Get On Up") aka Black Panther, vows vengeance for his father's death. The big set piece, is, of course, the two factions pulling out all the stops, Cap assisted by Bucky (dubbed 'Manchurian Candidate' by Stark, his switch flipped on and off throughout), Falcon (Anthony Mackie), Hawkeye (Jeremy Renner), Scarlet Witch and, most amusingly, Ant-Man (Paul Rudd), well played for action and humor by the Russos (the first battle, shot hand held, is garbled by 3D). One last revelation about the deaths of Starks' parents (John Slattery and Hope Davis, show in flashback with a 'Benjamin Button'ed' Downey Jr.) leads to a new alliance with Black Panther, whose presence bodes well for the next installment. Evans has been the big surprise of the Avengers series, but Bettany's always been a plus, first as a disembodied voice, now better given humanistic form. Stan is empathetic, Johansson the ass-kicking voice of reason and Renner deadpan. Like Scarlet Witch's powers, Olsen's taking stronger shape, although her particular skill is rather awkward in its visualization. The cast also includes Emily VanCamp as Agent Carter's niece Sharon, here getting a kiss from the Captain, and Daniel Brühl ("Rush") as Zemo, this film's puppet master. Grade: