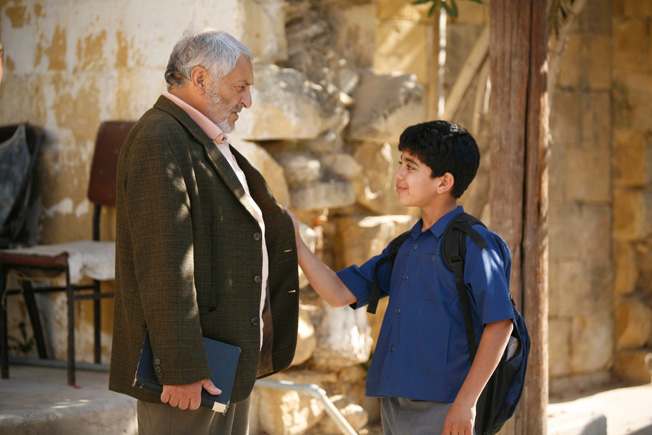 A quiet, book-loving widower busses into Amman from his village to his job as a janitor at the airport. One day, he finds a pilot's cap lying on the top of a trash barrel and amuses himself by wearing it home. As he walks up the steps leading to his apartment, Tareq, a young boy, spies him and asks if he is a pilot. Although he denies it, the next morning Tareq has brought a group of young kids to his door, all wanting to hear about the adventures of "Captain Abu Raed."

Jordan's first ever entry into the Foreign Language Film Oscar pool is both the somewhat sentimental tale of a senior citizen making a change in the life of a child and a movie that forges its own path with unexpected developments. Writer/director Amin Matalqa celebrates humility and education in this well-crafted film where the children define distinct characters that do not swamp lead actor Nadim Sawalha ("Syriana," TV's "Diana: Last Days of a Princess"). Abu Raed has no desire to fool the children, but he cannot resist the chance to entertain, and perhaps even teach them something, so he dons a fictional character of Captain Abu Raed. They, of course, pay no attention to his denials and are thrilled to be with this man who has always been in their midst unheeded. One day, Raed spies an older boy, Abu Murad (Ghandi Saber), watching them from behind a pillar, but the boy resists the urge to join them, telling his younger brother that the man is an airport janitor. Meanwhile, at the airport, a young and beautiful female pilot, Nour (Rana Sultan), takes an interest in the man who sweeps the floors but becomes absorbed in books during his commute back home. Nour's father is pressuring her to marry, but she does not respond to any of his arranged suitors. Raed attracts the attention of a French traveler as well, impressed that the man could not only find his lost bags but speak French as well, and so the jovial tourist presents Raed with a postcard and model of the Eiffel Tower. Nour brings him a snow globe from New York City. When he tries to give it to Murad, whom Raed knows has an abusive father, the boy just walks away. And yet, when one day Murad 'acquires' some cash and takes three of the boys to the airport, their discovery of what Raed had told them all along, the man's innate dignity shines through along with a wordless communication to Murad. "Captain Abu Raed" has Won all kinds of festival awards including the 2008 Sundance World Audience prize and it is easy to see why. This unassuming little film sounds like something we have seen before, and yet it charms us with its simple messages. When Nour asks Raed why, with all his learning he is a janitor, his response is wonderfully wise. There is plenty of humor in the film as well - Raed is presented with a trainee, Sameh (Nadim Mushahwar), who views Raed as some kind of chick magnet. In a montage of the kids enjoying Raed's company, one boy (Rami Samara) performs a funky dance with no self-consciousness. The filmmakers make the most of their locations, juxtaposing the ancient, terraced village with Nour's modern home and the airport. Raed enjoys a rooftop terrace with uncommonly gorgeous views where Nour receives the advice she needs. Matalqa makes a choice about his lead character's fate at his film's end that could be argued pushes the film too far into sentimentality, but he, in partnership with Sawalha's subdued performance, has also created a character that is hard to forget.

On November 15, 1959 Laura Kinney (Allie Mickelson) dropped by the Clutter home in Holcomb, Kansas to visit her friend, Nancy. What she found was the horrific murders of all four family members. The nationwide manhunt for the killers attracts the attention of New Yorker magazine writer Truman Capote (Philip Seymour Hoffman) who sets off to Holcomb to get the story. In the process, he invents a new type of writing, the non-fiction novel, in “Capote.” Philip Seymour Hoffman has proved to be one of America’s best and most versatile character actors today. He has made major splashes in supporting roles – check out “The Talented Mister Ripley,” “Almost Famous” and “Punch-Drunk Love” for the brilliance of the thespian – but hasn’t made the real breakthrough to stardom. Until “Capote.” Finally, the talented Mister Hoffman has acquired a role that befits his enormous talent and flawlessly recreates the flamboyant character of author and jet setter Truman Capote. In the hands of a lesser actor, Truman Capote may well have been played more as a caricature than as a person. Within seconds of Hoffman’s appearance on screen, duplicating Capote’s childlike voice (not lisp) and mannerisms perfectly, you see the title character and not the actor playing him. This performance is rivaled only by the equally brilliant character recreation done by David Strathairn (another underrated character actor) in “Good Night, and Good Luck.” Hoffman plays his character as both conniving and caring as the author struggles with his newfound creative writing style. The shining brilliance of Hoffman somewhat overshadows the rest of “Capote,” the first fiction feature by Bennett Miller (whose debut film, the documentary film, “The Cruise,” gave me a real appreciation for New York City). The story, from the first time screenplay by Dan Futterman, focuses on that period of the author’s life when he was drawn to Kansas to write a magazine article on the heinous murders that showed the darker side of man that was previously unknown to Middle America. Truman’s visit to the town is, initially, met with disdain by the locals because of his fey manners, avant-garde dress and urbane attitude. His close friend, author Nelle Harper Lee (Catherine Keener), who would attain her own claim to fame with a Pulitzer Prize for “To Kill a Mockingbird,” fronts for Capote and gets him an all important meeting with Alvin Dewey (Chris Cooper). Dewey, heading the murder investigation for the Kansas Bureau of Investigation, is reluctant to cooperate with the odd little man, but is soon taken in by Truman’s charm and resolve. When Perry Smith (Clifton Collins Jr.) and Richard Hickock (Mark Pellegrino) are arrested, tried, convicted and sentenced to die for the murders, Capote uses his hard-earned status in the town to gain the unheard of anytime access to the killers. As he delves into their minds and hearts, especially Perry’s, it dawns on Truman that this is more, much more, than a straightforward magazine article. What started as a New Yorker piece blossoms into something new, something different and Truman spends years developing what will become his masterpiece, “In Cold Blood.” Joining Hoffman is a talented, veteran cast that, while giving solid performances across the board, is outshone by the star’s outstanding acting job. Catherine Keener, as Nelle, is extremely likable and shows real affection for Truman. She isn’t given much more than a two-dimensional character to play but gives it a good go nonetheless. The always-reliable Chris Cooper does give good shrift to dedicated cop Alvin Dewey and deftly changes as his opinion changes from distrustful to believing in the diminutive Truman. Clifton Cooper Jr. gives some depth as Perry Smith but anyone who has seen the 1967 film adaptation of “In Cold Blood’ cannot help but compare his perf to the riveting one given by Robert Blake. The focus on Perry quickly pushes Mark Pellegrino’s Dick Hickock character into the background. Notable thesps such as Bruce Greenwood, Bob Balaban and Amy Ryan fill out their real life characters but they, too, are not given anything beyond passing attention. Hoffman is, after all, Truman Capote and that should be ‘nuff said. The production of “Capote” captures the period of 1959 to 1965 with good attention to detail. Cars, costume and cocktails are depicted with the appropriate flair and the film immerses itself in Capote’s literary world. Adam Kimmel (who does double duty as one of the actors) handles lensing duties capably as do production designer Jess Gonchor and costumer Kasia Walicka-Maimone. ”Capote” is a well-crafted film that allows its star to shine without taking away any of Hoffman’s thunder. “Capote” is a fine biopic that has a performance, by Philip Seymour Hoffman, that is one for the books. I’m thinking George C. Scott as “Patton” or, just to mention the competition this year, David Strathairn as Edward R. Murrow in “Good Night…” kind of presentation of a person – fully rendered and expertly capturing the essence of the man.