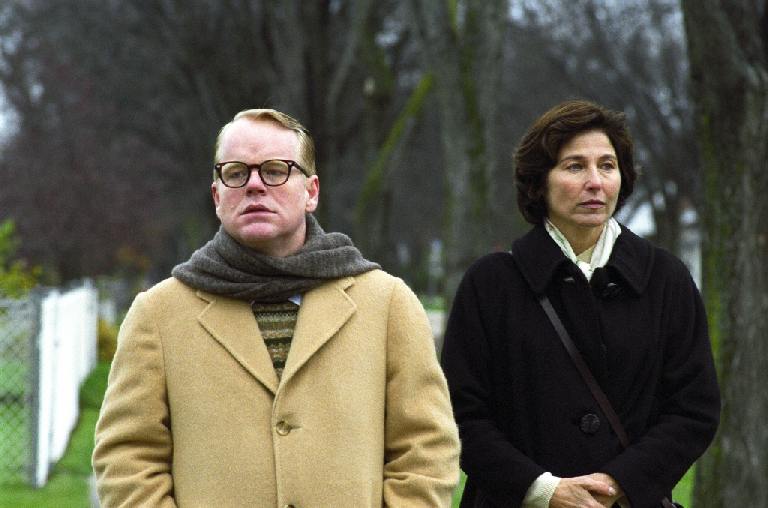 In November of 1959, the Clutter family of Kansas were murdered in cold blood by two passing drifters looking for a non-existent $10,000 stash in their remote farmhouse. A New Yorker magazine writer and darling of the jet set would recount this story in a groundbreaking new literary format, the nonfiction novel, cementing his fame but damning his soul in the process. The author's name was Truman "Capote."

"Capote" is a marvel on many scores. Most obviously, it finally provides a setting that allows character actor Philip Seymour Hoffman ("Cold Mountain") to dazzle in a lead role, giving a performance that makes 2005's Best Actor Oscar his to lose. But in addition to Hoffman's tour de force performance, there's actor Dan Futterman's screenplay - his first - an adaptation of Gerald Clarke's book that makes an intricate study of his subject. Then there's the sure-footed, tonally perfect direction of Bennett Miller, whose only prior film was the 1998 documentary, "The Cruise." Surround this accomplished trio with stellar production design, costuming, score and several noteworthy supporting players and "Capote" is a film that works on many levels, wholly engrossing from start to finish. Once Truman decides that the Clutter murders will be his subject, he travels to Kansas with his childhood friend, Nelle Harper Lee (Catherine Keener, "The 40 Year-Old Virgin"), whose "To Kill a Mockingbird" has not yet been published. Capote is utterly alien in the midwestern locale, a point made succinctly in a humorous surface exchange on haberdashery. Nelle is the buttoned-down buffer who guards Truman from both the locals and his own inclination towards self-drama. When they speak to the teenager who discovered the murder scene, Laura Kinney (Allie Mickelson), Truman squeaks past Nelle to make a self-absorbed speech about perception, but it is a telling one that will connect him to the true focus of his "In Cold Blood" research, killer Perry Smith (Clifton Collins Jr., "Traffic"). "Capote" twins its author and Smith as parallel opposites of light shading to dark and vice versa. As Truman probes Perry, the killer acquires a human face, but Truman's exploitative manipulation of the man, even as he forms an emotional attachment to him, is a Faustian payment to art. If the film has a drawback, it is that it does not delve deeper into why Nelle and Truman's lover Jack Dunphy (Bruce Greenwood, "Being Julia") continue to stand by him even as they recognize his total self-absorption and the corruption of his soul. Seymour Hoffman totally disappears into Capote, even given the significant difference in their physical build (the filmmakers take pains to keep Hoffman lower in the frame than his costars and costumer Kasia Walicka-Maimone ("Thirteen Conversations About One Thing") is adept at creating the illusion of a smaller figure). He's captured the high, nasally voice and fluttery hand movements, but its the smaller touches, like the self-satisfied smirk he lets play around the corners of his mouth when his manipulations take hold, that really make the character. It's also a pleasure to watch him play the extremes, holding court backstage after a book reading with a fawning audience or wallowing in self pity at a bar when he should be celebrating a friend's success. Hoffman's also surrounded by high caliber support, beginning with Keener, who has been toning down the acid in her performances of late. Here she's quietly supportive, the stalwart if knowing friend. Chris Cooper ("Seabiscuit") represents his entire region in his wary reception of the outwardly gay Capote as Alvin Dewey, the local Kansas sheriff in charge of the investigation and he's wonderfully offset by Amy Ryan ("Keane") as his celebrity besotted wife. Clifton Collins Jr. never quite projects menace as Smith, but we're seeing him through Truman's eyes and so we get a wounded misfit. Harder and cockier is Mark Pellegrino ("National Treasure") as Smith's partner in crime Richard Hickock. Production design by Jess Gonchor ("The Last Samurai's" art director) is steeped in period and the contrast between the starkness of the midwest and the richer elegance of Manhattan (these are brilliantly juxtaposed by Miller when uses a shot of Truman gazing out a sleeper compartment's window to connect widescreen shots of daytime Kansas flatness and a nighttime skyline full of NYC skyscrapers). Composer Mychael Danna's ("Where the Truth Lies") plaintive score is simple, yet effective. "Capote" is a biopic about a writer that, while not shedding any light on actual wordsmithing, gets at the artistic conundrum of gaining trust from subjects one may ultimately betray. It reveals Truman's book title as a statement of self.

On November 15, 1959 Laura Kinney (Allie Mickelson) dropped by the Clutter home in Holcomb, Kansas to visit her friend, Nancy. What she found was the horrific murders of all four family members. The nationwide manhunt for the killers attracts the attention of New Yorker magazine writer Truman Capote (Philip Seymour Hoffman) who sets off to Holcomb to get the story. In the process, he invents a new type of writing, the non-fiction novel, in “Capote.” Philip Seymour Hoffman has proved to be one of America’s best and most versatile character actors today. He has made major splashes in supporting roles – check out “The Talented Mister Ripley,” “Almost Famous” and “Punch-Drunk Love” for the brilliance of the thespian – but hasn’t made the real breakthrough to stardom. Until “Capote.” Finally, the talented Mister Hoffman has acquired a role that befits his enormous talent and flawlessly recreates the flamboyant character of author and jet setter Truman Capote. In the hands of a lesser actor, Truman Capote may well have been played more as a caricature than as a person. Within seconds of Hoffman’s appearance on screen, duplicating Capote’s childlike voice (not lisp) and mannerisms perfectly, you see the title character and not the actor playing him. This performance is rivaled only by the equally brilliant character recreation done by David Strathairn (another underrated character actor) in “Good Night, and Good Luck.” Hoffman plays his character as both conniving and caring as the author struggles with his newfound creative writing style. The shining brilliance of Hoffman somewhat overshadows the rest of “Capote,” the first fiction feature by Bennett Miller (whose debut film, the documentary film, “The Cruise,” gave me a real appreciation for New York City). The story, from the first time screenplay by Dan Futterman, focuses on that period of the author’s life when he was drawn to Kansas to write a magazine article on the heinous murders that showed the darker side of man that was previously unknown to Middle America. Truman’s visit to the town is, initially, met with disdain by the locals because of his fey manners, avant-garde dress and urbane attitude. His close friend, author Nelle Harper Lee (Catherine Keener), who would attain her own claim to fame with a Pulitzer Prize for “To Kill a Mockingbird,” fronts for Capote and gets him an all important meeting with Alvin Dewey (Chris Cooper). Dewey, heading the murder investigation for the Kansas Bureau of Investigation, is reluctant to cooperate with the odd little man, but is soon taken in by Truman’s charm and resolve. When Perry Smith (Clifton Collins Jr.) and Richard Hickock (Mark Pellegrino) are arrested, tried, convicted and sentenced to die for the murders, Capote uses his hard-earned status in the town to gain the unheard of anytime access to the killers. As he delves into their minds and hearts, especially Perry’s, it dawns on Truman that this is more, much more, than a straightforward magazine article. What started as a New Yorker piece blossoms into something new, something different and Truman spends years developing what will become his masterpiece, “In Cold Blood.” Joining Hoffman is a talented, veteran cast that, while giving solid performances across the board, is outshone by the star’s outstanding acting job. Catherine Keener, as Nelle, is extremely likable and shows real affection for Truman. She isn’t given much more than a two-dimensional character to play but gives it a good go nonetheless. The always-reliable Chris Cooper does give good shrift to dedicated cop Alvin Dewey and deftly changes as his opinion changes from distrustful to believing in the diminutive Truman. Clifton Cooper Jr. gives some depth as Perry Smith but anyone who has seen the 1967 film adaptation of “In Cold Blood’ cannot help but compare his perf to the riveting one given by Robert Blake. The focus on Perry quickly pushes Mark Pellegrino’s Dick Hickock character into the background. Notable thesps such as Bruce Greenwood, Bob Balaban and Amy Ryan fill out their real life characters but they, too, are not given anything beyond passing attention. Hoffman is, after all, Truman Capote and that should be ‘nuff said. The production of “Capote” captures the period of 1959 to 1965 with good attention to detail. Cars, costume and cocktails are depicted with the appropriate flair and the film immerses itself in Capote’s literary world. Adam Kimmel (who does double duty as one of the actors) handles lensing duties capably as do production designer Jess Gonchor and costumer Kasia Walicka-Maimone. ”Capote” is a well-crafted film that allows its star to shine without taking away any of Hoffman’s thunder. “Capote” is a fine biopic that has a performance, by Philip Seymour Hoffman, that is one for the books. I’m thinking George C. Scott as “Patton” or, just to mention the competition this year, David Strathairn as Edward R. Murrow in “Good Night…” kind of presentation of a person – fully rendered and expertly capturing the essence of the man.