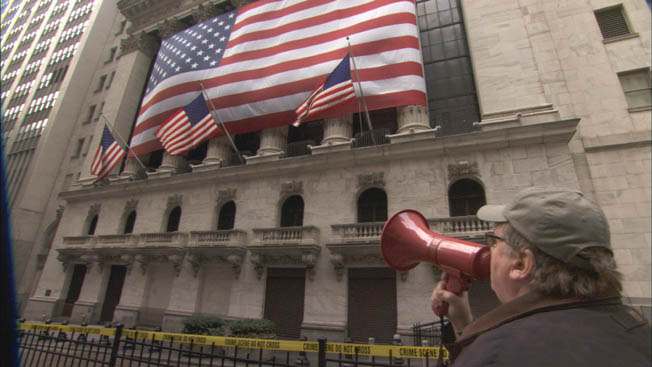 Documentarian Michael Moore ("Roger and Me," "Sicko"), America's polemical voice of the people, watched the onslaught of the recent recession with the same horror and outrage as the rest of us, but in his latest film, he challenges the very foundation of what most think of as the American Dream in "Capitalism: A Love Story."

With "Capitalism: A Love Story," Michael Moore is both up to his usual tricks and not. Sure, he finds and interviews the real hard luck cases, tries to get past security for impromptu interviews with men who have none to gain from agreeing to them and pulls stunts like winding crime scene tape around the New York Stock Exchange, but unlike the manipulation of facts and imagery used to make his cases in "Bowling for Columbine" and "Fahrenheit 9/11," here a more restrained Moore comes across as more fair and even handed than he has in years (a couple of instances of families being evicted from their homes do not provide their back story, giving us no idea of how complicit these people were in their own financial ruin.) I expected a rant at Wall Street greed that might delve historically back to Reaganomics, but Moore goes deeper still, back to the post WWII boom that, until a few years ago, gave most Americans a feeling of safety. Moore returns to his home town of Flint to talk to his dad about his years as a union laborer at the local GM plant. His dad could afford to raise a family in a house they owned with a stay at home wife and no worries about funding his retirement. Imagine that. Now a company called Condo Vultures swoops in to buy foreclosed properties at a third of their original value as hard working people loose their homes and employers like Walmart insure blue collar workers without their knowledge making them more valuable to the company dead than alive. And they have the nerve to refer to this profit making scheme as 'Dead Peasants' insurance. Moore goes back to FDR, who wished to pass a second Bill of Rights guaranteeing every American a job. Back then, as Moore explains, industries such as the automobile industry took off because there were no competitors, Japan and Germany recovering from bombed out cities. It is the very concept of Capitalism, Moore promotes, that has led us to where we are - he even gets family priests to declare it evil. President Carter warned the nation that it was becoming identified by what it owned rather than what it did before Reagan ushered in the 'me' decade and made the rich richer by cutting their taxes by 50%. Gradually the working class had their stake in what they worked for taken away. Moore shows a couple of examples of businesses owned today by fair-minded individuals - a bread baking company's line workers earn about 60,000 a year sharing in profits and at Isthmus Engineering, the employees vote on all decisions. Democracy, not Capitalism. Moore goes further into politics by illustrating how the bailout was accomplished even though Congress voted it down. Ohio Congresswoman Marcy Kaptur is outraged and Elizabeth Warren, the Congressional Oversight Panel's chairwoman and a law professor at Harvard University, bluntly tells Moore that she doesn't know where the money has gone because their was no accountability put into place when it was handed out. The Treasury Department has been tied to corporate banking from Merrill Lynch CEO Don Regan through the bailout's Henry Paulson, a former Goldman Sachs CEO. Fox news footage of various right-wingers declaring Obama as a socialist is used to show fear tactics being used to maintain the status quo. (In an extended side story, Moore shows capitalism run amok at a lower level when the city of Wilkes Barre, PA subcontracted its juvenile detention system out to a commercial bidder and local judges took payola to keep it full of offenders whose crimes included such things as throwing a cereal bowl.) A lot of what Moore relates has been covered elsewhere. Vanity Fair has published numerous articles about Wall St. chicanery and the bail out, for example. What Moore does here is take a concept even he was brought up to believe in and debunk it and no matter what one thinks of Moore, it's hard not to admire one of his closing sentiments - "I refuse to live in a country like this, and I'm not leaving." It contains passion and fight, so unlike the empty promises of celebrities who claimed they'd move to France if Bush is reelected. Unfortunately, for Michael Moore, greed has been with us, as even he points out, since ancient times.