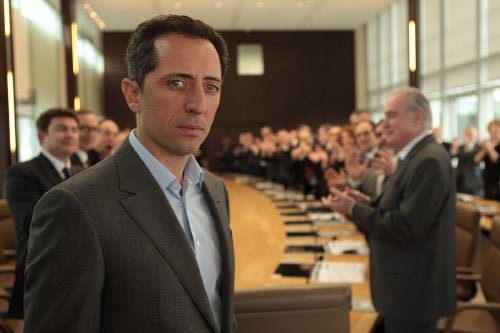 The CEO of the Phenix Bank collapses on the golf course during a game. His successor is the young and ambitious Marc Tourneuil (Gad Elmaleh) who has big plans as the boss of one of France’s leading banking firms. But, these plans are put in jeopardy when an American hedge fund company tries to buy the business in “Capital.”

“No weapons, toxic industries or money laundering” will be tolerated by the new CEO of Phenix Bank, but Marc is unprepared for the pressures of his professional and personal lives that will follow his newfound power base. As he assumes the head spot at the bank, his intentions are honorable – to a degree. But, the wheeling and dealing of the real powers behind the throne, and above it, leads the dynamic Marc down a path of all-consuming corruption as he desperately vies to keep his job and his lofty lifestyle. “Capital” is directed by iconic film legend Costa-Gavras (who co-wrote the screenplay) and he shows his usual craftsmanship in telling of Tourneuil’s rise and fall in France’s dog-eat-dog banking industry. It is also a tale of ambition and how that ambition takes over one man’s life. Gad Elmahleh stars as Machiavellian Marc who lusts for power and actively lobbies for it when his former boss is incapacitated. The actor portrays the suave, sophisticated and ruthless executive with effectiveness that, despite his lack of moral character, you (almost) sympathize with the man. He faces the deep American pockets represented by Gabriel Byrne as the head of the hedge fund company that is attempting to takeover his bank. “Capital” gives an intriguing look into the high-level workings of corporate Europe through the eyes of Tourneuil in an effective character study. He becomes a new millennium Robin Hood when he declares “we take from the poor and make the rich richer.” That is a chilling statement for those of us who are the poor that he vows to take from.