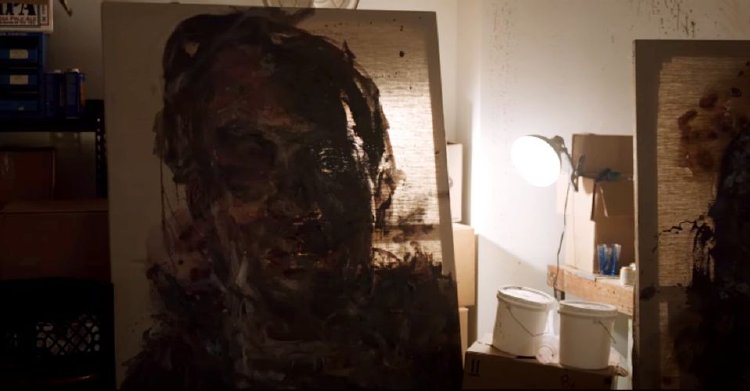 Chicago's Cabrini-Green housing projects were terrorized by a legendary horror, a former slave with a hook for a hand, for decades.  Now unrecognizable, the gentrified area is home for upwardly mobile millennials like painter Anthony McCoy (Yahya Abdul-Mateen II, "Us") and his partner, gallery director Brianna Cartwright (Teyonah Parris, "If Beale Street Could Talk").  But when McCoy's career begins to slide, he goes to what’s left of the projects for inspiration, spurred on by his brother-in-law’s (Nathan Stewart-Jarrett) tales of Helen Lyle (Virginia Madsen in the original film).  There he meets William Burke (Colman Domingo, "Ma Rainey's Black Bottom") who tells him the true story that led to the legend.  Anthony, who’s stung by a bee as he takes pictures, incorporates imagery of the supernatural killer into his work and it won't be long before he meets the "Candyman."

Although I love the horror genre, I was always conflicted about the original “Candyman,” whose hook-handed killer was the ghost of a black portrait artist who dared to have an affair with a white woman in the early 19th century and paid dearly, the woman’s father leading a group who cut off his hand, poured honey over him to draw stinging bees and then burned him alive.  Why, I always wondered, would such a horrifically abused black man come back to terrorize poor black people instead of those who caused him so much pain?  Now, almost thirty years later, cowriter (with producer Jordan Peele & Win Rosenfeld)/director Nia DaCosta ("Little Woods") attempts to correct that contradiction in what can only be described as a sequel for the Black Lives Matter era.  DaCosta’s mythology gets a bit murky before righting itself with a bold ending, but the film excels in its striking visuals incorporating shadow puppetry, mirrors and art installations,

Tony, who most view as riding on Brianna’s coattails, is encouraged by Clive to explore Cabrini Green’s past for an upcoming art show, but the work he shows, ‘Say His Name,’ a mirror hiding history, is received dismissively, art critic Finley Stephens (Rebecca Spence) going so far as to accuse artists of being responsible for gentrification.  Brianna is alarmed by Tony’s drunken, aggressive departure, but that alarm increases when the next day, she discovers Clive and an assistant brutally murdered in front of Tony’s work.  (The brilliantly edited depiction of that murder is a highlight, a mirror and a wall sized projection creepily incorporated.)  Suddenly Stephens changes her tune and Brianna finds her relationship status flipped.  But Tony, whose bee sting has become perilously infected, is hiding his new work, his behavior becoming stranger, more murders racking up.  He also confronts his mom (Vanessa Williams) about an odd lie about his birth.  Distraught, Brianna decides to find William Burke.

One problem with the screenplay is the relationship of Anthony and Bri which falls apart way too easily at the first hint of problems given the speed with which Anthony’s grip on reality begins to fail.  The two actors don’t convince as a well established couple, both more successful in their separate story lines.   While William Burke’s story is horrifying in its own right, it requires a leap to tie it to the legend of Daniel Robitaille (Tony Todd), and, therefore to Anthony.  There is talk of collective trauma to explain this all away which could have used some fine tuning.  One of the Candyman set pieces, while creepy in execution, is divorced from the rest of the story.  Commentary about the art world interwoven throughout is biting, artists depicted as mentally unstable, dealers and museum curators as exploiters of sensationalism.

What  2021’s “Candyman” does right is to use supernatural horror to depict the real horror decades of police brutality and corruption.  And it does so with enough style, including Robert Aiki Aubrey Lowe’s new twist on that music box score, to forgive some of its less well honed aspects.

In 1992, Helen Lyle (Virginia Madsen) entered the notorious Cabrini Green housing project to debunk an urban legend about a demon whose name, said five times in front of a mirror, would summon it and certain death. She failed. The project was razed and gentrified, but it did not rid the site of the “Candyman,”

I do not “like” horror movies. Fortunately, I have a partner and fellow film critic that does likes the genre so I, doing my job, get to see the “best.” The ’92 original, starring Tony Todd in the title role, stayed with me a lot longer than the typical slasher film stars like Jason Vorhees, Freddy Kruger or Michael Myers (of “Halloween” fame, not “Austin Powers”).
Sophomore director Nia DaCosta, who co-wrote the screenplay with Jordan Peele and Win Rosenfeld, carries forward the Candyman “legend” and continues the saga rather than just routinely redoing it.

The Cabrini Green project, once a haven to crime and drugs (and the Candyman), was torn down over a decade ago to be replaced by mixed income housing. But the destruction of the buildings did not mean the destruction of the demon. When a couple, Anthony (Yahya Abdul-Mateen II) and Brianna (Teyonah Parris), move into one of the new luxury apartments, we know that the Candyman will be back.

This is where the story becomes its own as it uses the original boogeyman in new and scary ways. You kind of know what direction the yarn will take as I watched for the fright elements of the first film get a new light in the Chicago art world.

Anthony has a chance encounter with William (Coleman Domingo), who, you are reminded at the beginning, was the boy (young William) who met the Candyman face-to-face 20 years ago. This inspires the artist and Anthony begins what will become a rave exhibit built around the urban legend. All the while, the Candyman is slowly, inexorably taking over Anthony’s mind and soul.

Of course, the story reprises the important part of the Candyman myth – say his name five times in front of a mirror and he will come to life. The only thing not stressed in the legend is that the Candyman will brutally kill those who conjure him. This leads to the expected slasher stuff of the first film but done with more artistry and taste than gore for gore’s sake. Oh, yeah, Tony Todd makes a cameo appearance, I am glad to see.