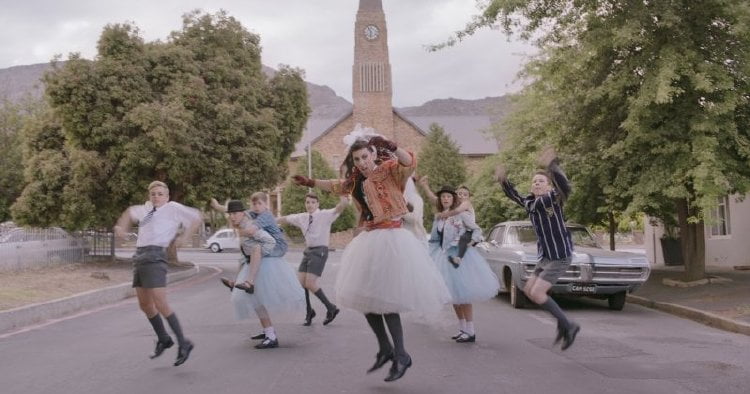 Johan Niemand (Schalk Bezuidenhout) must report for his mandatory two-year military service in apartheid-dominated South Africa. He is assigned to the South African Defense Forces Choir and Concert group and becomes a “Canary.”

In 1984 Villiersdorp, South Africa, Johan Niemand (Schalk Bezuidenhout) indulges his love of Boy George and dressing up when his church elder father and society club mother are not around. After receiving his summons for mandatory two year military service, however, he will have fewer opportunities to be himself. But his gift for music makes him a natural for the South African Defence Force Church Choir, a group that naturally attracts those like himself, who avoid the trenches by becoming a “Canary.” Cowriter (with Charl-Johan Lingenfelder)/director Christiaan Olwagen’s hugely ambitious year-in-the-life musical charts one young man’s journey to self acceptance during the height of the Apartheid regime. Separated into chapters, “Canary” is a complex dive into oppression, from the state’s thuggish separation of people of color to conservative bashing of homosexuals. Disdain for the English is still in vogue nearly one hundred years after the Second Anglo-Boer War. Olwagen also addresses the contradictory nature of religious ties to a military which is killing indigenous people. The music, too, is an oddly effective amalgamation of church choir hymns, military songs and 1980’s New Wave, culminating in a composition that melds a religious hymn with Culture Club’s ‘Victims.’ The film opens with Johan coming face to face with his local pastor after accepting a dare to march down his street in makeup and bridal wear, staged as a musical number to Bronski Beat’s ‘Smalltown Boy.’ Johan is dressed far more conservatively for his audition for the Canaries, where he lands one of twenty-three coveted spots. But Johann gets a taste of what is in store on the train to Valhalla when the outwardly gay Ludolf Otterman (Germandt Geldenhuys) joins his compartment with his tinful of crunchies made by mom. Johann tries to quiet Ludolf to avoid attention, but their barking corporal (Beer Adriaanse) arrives to pummel him into submission and stuff his pockets with treats. On base, the Canaries receive a harsh welcome from Reverend Koch (Gérard Rudolf), in stark contrast to their gentle choir master Reverend Engelbrecht (Jacques Bessenger). The group struggles to pass inspections until one day, Johan makes a bold move to do the right thing, falling back to run with the overweight Ludolf. They are commended for acting as a team. Over the course of the film we see these men during ‘weekend pass’ (Johan’s first trip to a club allows him to break out his New Wave clothes, imagining dancers representing Boy George, David Bowie, Michael Jackson, Prince, Adam Ant and Grace Jones) and on tour. Choir members are put up by locals who’ve watched them perform, a morale booster for those with sons in service. If one night finds them with the conservative Vissers, the next finds them with apparent cougar Arlene Louw (Anna-Mart van der Merwe), but Mrs. Louw recognizes Johan’s untapped potential in her own, encouraging him to leave South Africa far behind. The boys are confronted by an anti-war activist who poses questions Engelbrecht fails to answer. Johan is rattled when Wolfgang Müller (Hannes Otto) acts on their attraction, leading him to self harm back on base (expressed in another fantastical dance piece), sending him running to a sympathetic Engelbrecht. Koch takes another tack. Johan must also face his own complicity in the war when the Canaries are shipped to the horrors at the border (only the second time we see black faces). Bezuidenhout, who has the face of a silent film comedian, is a multi-talented lead. If we are at first surprised by his denial of his own sexual orientation, we come to understand as the actor breaks our hearts attempting to come out to his sister Marilette (Tinarie van Wyk Loots). The small town boy who chafes against being called ‘farmboy’ learns to live by his own motto, ‘Per aspera ad astra.’ Olwagen’s coming-of-age military musical is a marvel. Grade:

Johan is a small town boy with big dreams but compulsory service, in the form of his draft notice, rears its head and he must report for duty. Having a good singing voice, he auditions for SADF choir and is accepted into the Canaries. His hitch is also his coming-of-age as he is torn from his comfortable world and thrust into army life. Director Christiaan Olwagen co-writes this historical, coming-of-age LGBT military musical set in time of war story with Charl-Johan Lingenfelder and it is divided into the chapters of Johan’s military life as a Canary – The Audition, Basic Training, The Tour, The Hosts, The Rubicon (Johan’s own crossing), The Border and more. It is a unique look into sexual curiosity and exploration, life under apartheid, bigotry and homophobia in mid-1980s South Africa just before the racist white regime fell. The story flows through its chapters, allowing us to get to know Johan, his hopes and insecurities, and the other members of the choir group. We follow them through the highs and lows of life as a Canary, at once privileged and disdained by the “real” soldiers fighting the border war with Angola. This is a period character study that takes us to places previously unknown, at least to me, and gives us a bit of South African history as apartheid drew to a close.