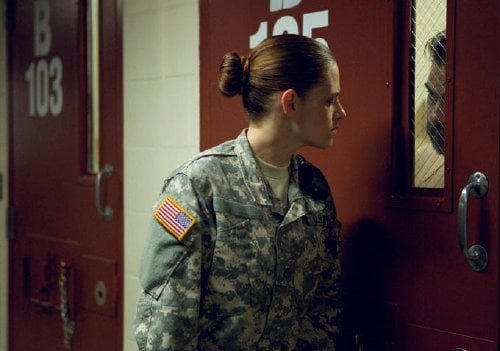 Smoke pours out of of the World Trade Center. A man on a prayer rug is abruptly black bagged, sound muffled and shipped along with others to Guantanamo Bay. Eight years later, new Marine recruit Pvt. Amy Cole (Kristen Stewart, the "Twilight" series) is schooled in how to treat Gitmo detainees, never letting them know anything about the people 'who keep them alive.' But that proves difficult when she meets Ali (Payman Maadi, "A Separation"), the man who's been there since Camp Delta was known as "Camp X-Ray."

Writer/director Peter Sattler makes a strong feature debut that looks at the psychological damage and inhumane treatment of both Gitmo detainees and those enlisted to guard them. Featuring a dynamic performance from Maadi and thoughtful one from Stewart, the claustrophobic drama only falters when it leans too heavily on obvious metaphors and screenwriting cliches in its final moments. When Cpl. 'Randy' Ransdell (Lane Garrison, TV's 'Prison Break') dresses down one of his inductees for referring to their charges as 'prisoners,' it is Cole who steps up with the expository explanation that labelling them as such would require adherence to the Geneva Convention. With first his opening credit sequence and this short statement, Sattler's set the stage for empathy for detainees with no human rights. Ransdell's introductory speech is cut short by the need to form a four-man squad to silence a one-man uprising. Cole is the only newbie to volunteer. She gets smacked in the jaw and spit in the face by Mahmoud (Marco Khan, "Iron Man") for her efforts, but her colleagues' admiration is clear. She gets her first exposure to Ali as she wheels around the library cart. He tries every which way to engage her in conversation, explaining his two year trial waiting for the 7th Harry Potter entry, but Cole plays by the book with mostly one-word answers. Giving in, he asks for 'Azkaban.' She thinks he's asking for some Arabic title. But for all her dour severity, Stewart lets us see that Cole is intrigued by Ali and his chatter (it doesn't hurt that Ali is the best looking of the detainees we see, a bit of stacking the deck). Frustrated by his inability to fully engage 'blondie,' Ali drapes the window she peers through with a towel and when she attempts to grab it down through the slot in his door, she's the recipient of a feces cocktail. But she's shocked by the retribution doled out, a practice known as 'frequent flyer' where detainees are moved every 2 hours for days or weeks on end. Meanwhile she makes tentative relationships with fellow soldiers. Pvt. Raymond Jackson (Ser'Darius Blain, "Star Trek Into Darkness") shares her sensibilities, thinking the detainees' treatment is excessively harsh. She shares meals with Pvt. Rico Cruz (Joseph Julian Soria, "Hamlet 2"), whose views lean more towards doing one's job and getting the hell out. R&R includes fishing trips and beer, but a flirtation with Ransdell turns nasty when consentual kissing escalates to near rape. The indiscretion with her superior will come back to haunt her when she objects to his personally motivated and non-SOP humiliation of Ali, who's become her friend over time. Sattler's economical production, which could have been shot in a school basement, opened up with a couple of seaside vistas, is effective, forcing these inexperienced Marines and their unknown charges into close quarters. He never lays out any of the charges against these men, a tactic which strengthens Ali's third act speech about why he rebels. But the metaphor he uses for Amy's final political statement is overly sentimental (it's near reference to a Biblical fable illustrates how much more powerful it might have been) and the concluding, telegraphed scene is too pat (and also questionably implausible). Still, Stewart and Maadi create an intellectual romance that lingers. Grade: