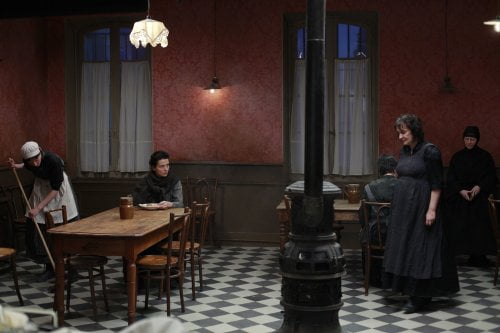 Camille Claudel (Juliet Binoche) was a talented sculptor who was the mistress of the more widely know Auguste Rodin. She suffered a breakdown when their relationship fell apart and her mother, sister and brother, Paul (Jean-Luc Vincent), have her committed to an asylum in the south of France. We spend the next three days with the woman as we try to uncover the truth about “Camille Claudel 1915.”

When Juliette Binoche expressed an interest in working with writer/director Bruno Dumont ("Hors Satan"), he had been reading about the incarceration of sculptress Camille Claudel (Juliette Binoche) by her family in an insane asylum, and so, using her correspondence with her younger brother, writer Paul Claudel (Jean-Luc Vincent), along with her medical records, he devised a stark meditation on religion, art and the exploitation of women in "Camille Claudel 1915." This bleak look at the life of an artist, whose 'madness' is highly questionable (her doctors advised the family to release her to no avail - she was held in Montdevergues asylum from her father's death in 1913 until her own in 1943), continues his Bressonian themes, but although one wishes he had delved deeper into some of the ideas which he presents, Binoche makes the tragedy palpable. Her distress at her loss of freedom is aggravated by asylum inmates far worse off than she, and although she is capable of compassion, she resents being made one of their company. Told to look to God by her fanatical brother, Binoche gives a master acting class in one scene where she prays aloud, her whispers rising and falling in pitch, her voice breaking, her eyes shining with religious fervor. Dumont placed Binoche among actual nursing home residents (Alexandra Lucas is most extraordinary), with their real nurses portraying the asylum's nuns. The landscape through which they take restorative walks is harsh and beautiful. On one such, we see Paul enroute to visit Camille, explaining to a priest how the work of Rimbaud and a children's choir proved his spiritual epiphany. Notably, those representing the Catholic Church are benignly blank. But the film's climax, the much awaited from Camille's brother, proves a let down, the woman who has so vocally made her unhappiness known too easily cowed. Paul's charges of paranoia and even possession are 'proven' by her belief that her lover of fifteen years, Auguste Rodin, is responsible for her persecution. As Paul, Vincent is an infuriating, self righteous prig.

This is the latest film by French director-writer Bruno Dumont and he tells a grim story garnered from Camille’s medical records and the letters between Paul and Camille. She is in despair, imprisoned in a place for the mentally handicapped with no hope for freedom. Camille is very intelligent and an astonishing contrast to the rest of the simple-minded inmates. She seems to float above the day to day life in the asylum but has become increasingly paranoid, even getting permission to prepare her own meals for fear of being poisoned. “Camille Claudel 1915” is a quiet film with very little dialog. Camille is near mute most of the time and only becomes vocal when she meets with the asylum director (Emmanuel Kauffman) and begs an answer to her question – why am I here? He does not answer her but does tell her that her brother Paul is coming to visit three days hence. The normally troubled and dour Camille brightens considerably with the news and the hope it gives her about attaining her release from her prison. But we, like Camille, are kept in the dark as to why she is there. Juliet Binoche dominates the screen not just by being front and center for almost the entire film. She has presence and does not need many words to convey her anguish. There is virtually no intellectual stimulation in the asylum and Camille is not permitted to write letters. As she wanders about the institution, the only companionship she has are the barely intelligible inmates and the sisters caring for them who speak few words, if any. Our three days with Camille make me feel the hopelessness and despair of this frustrated artist. This is due to Binoche and her nuanced performance as Camille Claudel. The background of the film is a stark and cold place that seems like it never gets warm there, even during the summer. The color palette of the film accentuates the starkness with muted colors in shades of gray, black and blue. Although nothing really happens throughout the 93-minute run time, the emotional conflicts that envelop the character of Camille kept me wondering, too – why is she there? I guess we can only guess.