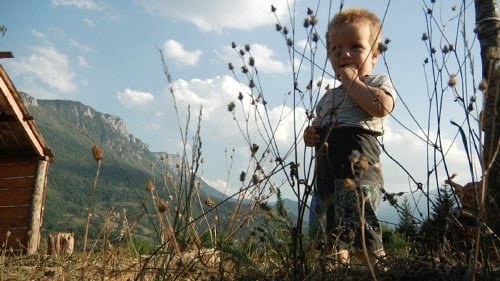 Kirsten Johnson has been cinematographer for documentary filmmakers for nearly two decades and on over 40 projects. That is a lot of film and Johnson (or, KJ) assembles footage shot over the years in a tour of current and former hotspots from around the world in “Cameraperson.”

Cinematographer Kirsten Johnson has traveled the world working on documentaries for PBS series and theatrical releases from Michael Moore's "Fahrenheit 9/11" to Laura Poitras' "Citizenfour." After twenty-five years in the business she went through her unused footage, assembling a memoir with the images that have haunted her as a "Cameraperson." This is one of the most innovative documentaries out there, an existential collage of memories astutely edited to reveal several themes. The most obvious impression we get from Johnson's film is how the plight of women, particularly those who endured rape during the Bosnian war, has affected her. But there is so much more here, from the documentary cinematographer's shaping of her directors' films to images of her mother sliding into the fog of Alzheimer's which, combined with her many rolling roadside shots, calls back to Chantal Akerman's "No Home Movie." The opening shot is of sheep being guided by a smiling old man on horseback. We see a chalet-like building and might assume this is an alpine scene. Only later when Johnson returns to that same building is it identified as a notorious Bosnian 'rape enslavement center.' We frequently hear Kirsten from behind her camera - gasping as lightning bolts divide the skyline, joking with her subjects in a boxing gym, directing Michael Moore into her shot, getting teased by Derrida as they cross a street. We see her shadow as she chases a subject down the street, but her presence will be erased when her work is made public. Death weighs heavily in the film, from the sites of large scale massacres at Wounded Knee and Manhattan to the more individual deaths of James Byrd, Jr., the Black man dragged to death in Jasper, TX and his avian namesake, a nameless bird given a resting place by her father and children. In Nigeria, a midwife with rudimentary equipment tries to get a struggling newborn to breathe - when she leaves, we hold our breaths as the filmmaker wonders whether to take action. This woman behind the camera has opened up an entire world through her lens, her life's work curated. "Cameraperson" is extraordinary. Grade:

Bosnia, Brooklyn, Kabul, Nigeria, Uganda, Guantanamo Bay, Dafur, Jasper TX and Huntsville AL and Washington DC are just a few of the places where JK’s camera captured the many lows, and some highs, of our world. Johnson puts together excerpts from all of the films she worked on and shot. Some are simple long, static shots of the landscape. Others show the real world through the eyes of her subjects, like a Nigerian midwife birthing and caring for a baby who chances of survival are low. This career-spanning document of a prolific camera operator includes footage from many of the documentaries she worked on as cinematographer. She contributed to “Very Semi-Serious (2015)” about the cartoons and cartoonists of New Yorker magazine; “Citizenfour (2014)” about Edward Snowden; and “Dafur Now (2007)” about the genocide in Sudan are just a few of the many with JK’s cinematographic imprint. The average filmgoer would likely glaze over watching this often languid documentary. But, for any true documentary film lover, this is a treasure trove of information on people, places and politics from around the world.