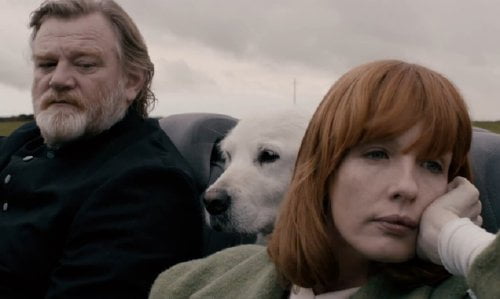 On the western coast of Ireland, Father James Lavelle (Brendan Gleeson, "The Guard") is in his confessional prepared for the often surprising sins of his parishioners. But on this day, he'll hear a man who has decided that the only way he can come to grips with the years of sexual abuse he endured at the hands of a now dead priest is to kill a good one and that Father James should meet him on the beach in a week, on Sunday. For seven days the priest tries to comfort those who often disdain him and his small fishing village becomes more and more sinister as he trudges toward his own "Calvary."

Italian director Luca Guadagnino ("I Am Love," "A Bigger Splash") is one of cinema's greatest sensualists and his home town of Crema provides just the right back drop for his swoony romance. A simple breakfast of boiled eggs set overlooking the fruit orchard which supplements it has never looked so enticing. Long, lazy days of riding bicycles and long tanned limbs stretched beside a pool reflect the glories of unencumbered youth. Music, be it Bach or the Psychedelic Furs, nourishes the soul and signposts future memories. A slide show of ancient statues becomes erotic with Mr. Perlman's appreciative words on the human form, his intern sprawled nearby a flesh and blood example. A perfectly ripe peach consumes Elio's sexual hunger. It is 1983 (André Aciman's novel was written as remembrance while James Ivory's ("Maurice") adaptation makes the action current). Elio is quite sophisticated for his age, having grown up surrounded by art, culture and the bounty of the land, but in matters of the heart he's a greenhorn, something he admits to Oliver after providing some local history in one of his bids to see if his attraction is mutual. Elio's gaze has never settled on a man before, but his initial confusion results in the time worn pigtails-in-the-inkwell response, antagonism masking desire. A night dancing in the town square finds Chiara (Victoire Du Bois, "The Forbidden Room") cozying up to Oliver, but Elio's attempt to encourage the pairing is met with Oliver's pique. An archeological trip to a local lake, where a statue gifted to a lover centuries before is raised, brings a truce. Back at the Perlmans villa, Annella reads a fable about a knight in love who doesn't know whether he should speak or die. She notes that her son has begun wearing a Star of David and smiles, his previous feelings of ostracism overcome by the American's own comfort with his religion. Chalamet, who has burst onto the scene with three films in quick succession ("Hostiles" has a limited Christmas opening), plays Elio with the right balance of intellectual maturity and emotional hesitancy, his coded probings of Oliver's feelings giving way to open passion once assured. The actor's expression of heartbreak at film's end is all the more affecting for its openness in front of his mother. Hammer is perfection here, carrying himself with confident charm (in one scene, recognizing his cultural faux pas, he becomes more considerate of Perlman housekeeper Mafalda (Vanda Capriolo), telling her of his upcoming absence for dinner). Stuhlbarg's professor is a genial host and quiet observer, an open minded intellectual who comforts his son with words of wisdom about the necessity of embracing life regardless of the pain it sometimes brings. Cinematographer Sayombhu Mukdeeprom ("Uncle Boonmee Who Can Recall His Past Lives") bathes his subjects in summer sunshine. In addition to the superb soundtrack, Sufjan Stevens has crafted one of the best original songs of the year with his 'Mysteries of Love.' But despite Guadagnino's slow, sensual burn, this isn't the deep, tortured love of "Brokeback Mountain." Instead I came away with the impression of a first infatuation, a summer fling important enough to mold future relationships rather than the love of a lifetime. "Call Me By Your Name" is a glorious cinematic soak, but it left my heart intact. Grade: