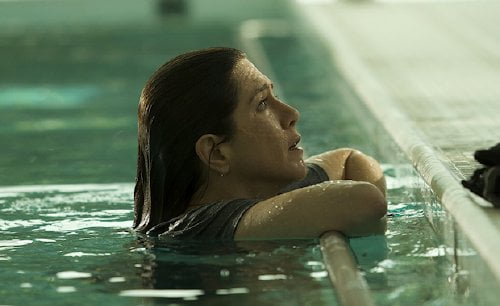 When Claire Bennett (Jennifer Aniston) hears of fellow chronic pain sufferer Nina Collins's (Anna Kendrick, "Pitch Perfect," "Into the Woods") suicide in their support group, her blunt approval is deemed inappropriate and she's thrown out. Now only her frustrated housekeeper Silvana (Adriana Barraza, "Babel," "Thor") is still trying to keep her alive, but Claire's fascination with the life Nina left behind may be what leads her back to experiencing pleasures such as "Cake."

Like it or not, Jennifer Aniston is more well known for her tabloid celebrity than her acting skills. Well, she's thrown down a gauntlet with this one. Aniston so completely dons the scarred skin, battered bones and deep depression of Claire, one forgets one is watching the former star of TV's 'Friends.' With the Oscar-nominated Barraza in a strong supporting role, Aniston is the frosting this misshappen "Cake" needs. Patrick Tobin's screenplay teases out information bit by bit so that we meet a caustic, unlikable woman without knowing how she got this way, but the fact that Silvana still seems to care makes us curious (and by the time the film is over, it is a reminder to consider extenuating circumstances). But while certain aspects of what he's trying to do work, most notably the Claire/Silvana relationship, director Daniel Barnz ("Won't Back Down") fumbles with the film's fantastical elements and a few of the scenes meant to add detail simply distract (just why Claire gets all lusty over her gardener, for example, or why Silvana should care that her employer's given the man toys for his children, even though we can make deductions from the latter). Haven driven away everyone, including the husband who still loves her, Claire spends her days self medicating and having Silvana drive her on various missions as she lies fully reclined in the passenger seat (L.A. here is a city of side streets, highways, overpasses and borders). After a visit to the spot where Nina jumped onto a freeway, Claire goes to her house claiming to the woman's widower Roy (Sam Worthington, "Avatar," "Sabotage") that she used to live there. But he knows better and when he shows up at her house, Silvana invites the man and his young son Casey (Evan O'Toole, "Wild") to lunch. Unfortunately, though, this 'healing' aspect of "Cake" isn't its best, even though it leads to the film's title. That would be Claire's reconnection with the people closest to her which happens when a trip to Tijuana to buy prescription drugs without the prescription goes south. At a restaurant, Silvana is recognized by former, now obviously better off, friends and Claire does her a solid with a face saving gesture. Their trouble at the border brings her lawyer husband Jason (Chris Messina, "Vicky Cristina Barcelona") back into the picture and his subsequent act of tough kindness brings everything home. An unmade up Aniston sporting facial scars, unwashed hair and unflattering apparel, is acerbic when not lost in thought or suffering nightmares. The actress physically conveys constant discomfort although she's not always focused on it and her gradual reawakening to the joys of life isn't oversold. It's truly a transformative performance. Barraza is also terrific here, putting across the frustration of trying to help someone who refuses to accept it while also contending with an employer/employee dynamic. "Cake" addresses an unusual subject unevenly. It's biggest success may be in giving casting directors the idea that Aniston's got more to give than her filmography would suggest. Grade:

The Jennifer Aniston that we have come to know and love, since the early days of “Friends” and her later big screen romantic comedies, takes on a very different role in her dramatic tour de force as the pain consumed Claire in “Cake.” She did not make the short list for Oscar nominations but her performance is worthy of one – draw of the cards? When we meet Claire, she is obviously a person who lives in extreme pain every day. Why she is in this state is not really explained until the end but you know that she is haunted by demons, both physical and psychological. Claire’s mechanism with dealing with her constant pain – only eased by the copious pain killers she takes, legal and illegal – is an angry cynicism that she uses to keep the world at arm’s length. Until, that is, she meets Nina (Anna Kendrick), an even more troubled soul from her pain crisis meetings. This part is just a backdrop for the intense character study by Jennifer Aniston that makes “Cake” a must to see for the superior acting job by its star. Complimenting Aniston’s Claire is Adriana Barraza, as her maid/housekeeper/chauffeur/best friend Silvana. The actress creates a fully formed character, especially when the pair goes on a mission to Tijuana to procure pain killers without a prescription. Aniston gives a performance that is both deep and layered. Her cynicism and acerbic wit, her ways of coping with her vaguely defined tragic loss (though you know it is intense for Claire) and constant pain, turns people away from her when what she needs is love. Hers is also a physically convincing performance as she accurately shows what it is like to be in chronic pain – the careful movements to minimize pain is spot on. It is a big performance in a small, personal film.