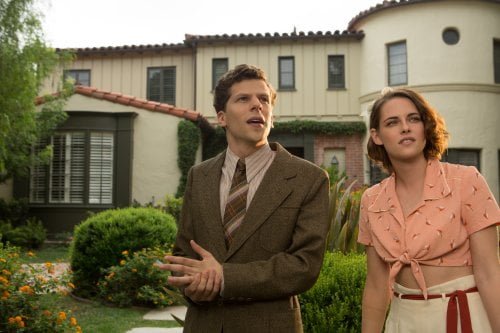 Bronx-born Bobby Dorfman (Jesse Eisenberg) is at loose ends in New York and wants to move to an exciting life in LA. His mom, Rose (Jeannie Berlin), calls her big shot Hollywood agent brother, Phil (Steve Carell), to give her son a job. Bobby makes the journey to Tinsel Town, and then back to NYC, in “Café Society.”

Bobby Dorfman (Jesse Eisenberg, "To Rome with Love") feels stifled at his father's failing Bronx jewelry store, so decides to try to land a job in Hollywood with his Uncle Phil (Steve Carell, "Melinda and Melinda"), a powerful agent. After being kept waiting for weeks, Bobby finally meets Phil, who asks his assistant Vonnie (Kristen Stewart, Eisenberg's "Adventureland" and "American Ultra" costar) to show him around. The two are obviously smitten, but Vonnie has a boyfriend and when forced to make a decision she breaks Bobby's heart. Disillusioned with La La Land, he returns to New York's "Cafe Society." While his latest is a big step up from his last two ("Magic in the Moonlight" and "Irrational Man"), writer/director Woody Allen's "Cafe Society" plays like a greatest hits package assembled from four separate short stories he found in the back of a drawer. It consists of the sprawling Jewish family of "Radio Days," the moral remove of "Crimes and Misdemeanors," the gangsters of "Bullets Over Broadway," the East Coast/West Coast divide of "Annie Hall" and the cafe society of "Midnight in Paris." At its core is this line from "Shadows and Fog" - 'The only love that lasts is unrequited love,' spoken by a prostitute (which this movie has too). "Cafe Society" unfolds in fits and starts, segues and non sequiturs, Woody's enervated narration in opposition to the liveliness of his cast. In the Bronx, Bobby's mom Rose (Jeannie Berlin, "The Heartbreak Kid," wonderful) affectionately spars with his dad (Ken Stott, "The Hobbit" trilogy). They're helped along by elder son Ben (Corey Stoll, "Midnight in Paris"), Rose accepting his money only after he declares it clean. As Ben is a gangster, surely she is turning a blind eye, behavior we'll see repeated with her daughter Evelyn (Sari Lennick, "A Serious Man") when she turns to Ben after her milquetoast husband Leonard (Stephen Kunken, "Still Alice") fails to resolve a bad neighbor issue. (Ben solves problems by pouring cement on them.) In LA, Bobby is charmed by Vonnie's down to earth demeanor amidst shallow glamour. Yet when he's invited to one of Phil and Karen's (Sheryl Lee, 'Twin Peaks' Laura Palmer) star-studded brunches, he meets NY modeling agency owner Rad Taylor (Parker Posey, "Irrational Man") and her husband, Hollywood producer Steve (Paul Schneider, "Bright Star"), and the ensuing friendship will change the course of his life. He's encouraged to pursue Vonnie, who finds herself free, but as the idea of marriage is floated, that old suitor returns. Although each learns the other's identity innocently, it turns out to be quite the triangle. But Bobby has something to return to back in New York, where Ben has opened 'The Hangover Club.' As its manager, Bobby shines and when he follows Rad's advice and rechristens it Les Tropiques, it really takes off, drawing artists, businessmen, stars and politicians along with Ben's shadier circle. Rad intervenes once more, introducing Bobby to recent divorcee Veronica (Blake Lively, "The Shallows"). The two spark, marry and begin a family. Then one day, Vonnie walks into his club... Eisenberg is a great Allen stand in, underplaying the tics and Jewish neurosis while still adopting them into his character. And if there is a better pairing of young actors today than Eisenberg and Stewart, I'd be hard pressed to name it, each bringing out the best in each other. Posey would seem to have found a perfect relationship of her own, hitting it out of the park a second time for Allen with a warm and vivacious performance that hovers over the film like a fairy godmother. Lively is fresh and funny as the blond goddess, her performance turning more introspective as she feels another presence in her marriage. Allen's script is sprinkled with several howlers, many given to Lively. When Vonnie takes Bobby to one of her preferred dives, he tells her 'My mother makes spaghetti and meatballs, but when a Jew makes anything, it's overcooked to kill all the germs.' But Allen's construction is often unfocused, a scene where Bobby calls for an L.A. prostitute only to be confronted by by Candy (Anna Camp, "Pitch Perfect") on her first day on the job, a short story that should have been just that, a short. His handling of Ben's momentous fate almost feels like an afterthought, little emotion invested in an underwritten character. Cinematographer Vittorio Storaro ("Apocalypse Now") divides the coasts with color, the Bronx cold, L.A. given a peachy, golden hue. Production designer Santo Loquasto ("Bullets Over Broadway") creates lived in spaces from working class apartments to transient digs, from sprawling estates to that central nightclub which seems to spin around its central spiral staircase. Suzy Benzinger's ("Blue Jasmine") costume design is exemplary, following the overall tone of dark in New York, light in L.A., Eisenberg sticking out on the west coast until he adapts. Stewart's flirty skirts and tap pants paired with ankle socks provide character contrast with Lively's chic elegance. "Cafe Society" isn't Woody at his best, but it's Woody through and through. Grade:

Later Woody Allen films have an undulation like a wave that moves between finely crafted, memorable films like “Vicky Christina Barcelona,” “Midnight in Paris” and “Blue Jasmine” and more forgettable works like “To Rome with Love,” “Magic in the Moonlight” and “Irrational Man.” “Café Society,” I think, falls into the latter category. Jessie Eisenberg, as Bobby, is the Woody Allen alter ego that the writer/director creates for the actors who play him in many of his movies. Some have done very well filling Woody’s onscreen shoes, like Owen Wilson in “Midnight n Paris.” Others, like Kenneth Branaugh in “Celebrity,” are woefully miscast. Eisenberg falls somewhere in the middle of the pack of the Woody clones and he captures all the ticks and mannerism as well as good delivery of the witty Woody dialog. The story follows Bobby to Hollywood, where he cools his heals as he waits for the important meeting with Uncle Phil. When they finally have the face-to-face, Phil decides that he can find things for Bobby to do and assigns his pretty secretary, Vonnie (Kristen Stewart) to show him around town. Very soon, Bobby becomes smitten with Vonnie and sees a life for them in New York. That plan is snuffed when she tells him she has a boyfriend. Little does Bobby know that her lover is Phil. Bobby is miserable, now, living in Hollywood and moves back home to the Bronx where he starts managing his gangster brother’s, Ben (Corey Stoll), nightclub, Club Hangover. It turns out that Bobby has a knack for running the place and it becomes a popular watering hole. Ben, though, is a ruthless mobster whose way of solving a problem is to take the problem person for a ride. Soon, he is indicted for his heinous crimes and faces the electric chair. Now the owner of the club, Bobby changes the name to Les Tropiques and, with the help of his friends, Rad (Parker Posey) and her husband, it is a huge success. He marries another Veronica (Blake Lively) and life is good for Bobby. Until, that is, Vonnie shows up at club. I always look forward to the next Woody Allen movie. After all, he attracts A-list actors and crew, including uber-cinematographer Vittorio Storaro. The 1930s period sets and costumes are spot on, as is the rest of the production. The all-over-the-place story and huge cast make for a film that is more a series of connected vignettes than a linear story, diminishing the affect of “Café Society.”