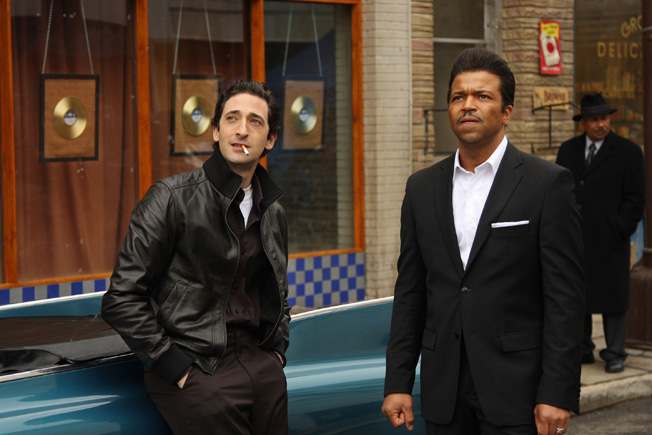 By 1947, Polish immigrant Leonard Chess (Adrien Brody, "The Pianist") was embedded in the Black music scene of Chicago. The owner of the Macomba Club wanted more, though, and eventually became the owner of his own influential record label, fostering such stars as Muddy Waters (Jeffrey Wright, "W.," "Quantum of Solace") and Chuck Berry (Mos Def, "Be Kind Rewind"). But Chess's payment scheme involved doling out fancy cars that his talent thought were gifts and Leonard's label became known as "Cadillac Records."

Writer/director Darnell Martin ("I Like It Like That") follows the standard music biopic rise and fall outline, packing her film with outstanding music (mostly performed by the actors) and several strong performances. The film is choppy at times and its time line a little squiggly, but "Cadillac Records" should please as a celebration of the best of the Blues and the birth of Rock 'n Roll. Chess records performer Willie Dixon (Cedric the Entertainer, "Barbershop") acts as our guide and narrator, explaining that women's underwear had always been thrown on the stage of Blues acts, but when a white girl did it they called it rock 'n roll. In a terrifically nostalgic scene, Martin introduces Waters as a poor rural Black who is chosen by to be recorded by the Library of Congress on the side of the road. Hearing his own performance, Waters packs up and moves into Chicago, playing on the street. He meets his wife, Geneva (Gabrielle Union, "The Perfect Holiday," "Meet Dave"), and a seventeen year-old mouth organ maestro, Little Walter (Columbus Short, "This Christmas," "Quarantine"). When his band challenges the band on stage at the Macomba, a long standing, if often rocky relationship is forged. Leonard does the unheard of, traveling in the same car with Muddy throughout the South to get record play. Leonard, who has since married Revetta (Emmanuelle Chriqui, "You Don't Mess with the Zohan") abstains from the women who pile on with the unrepentant Waters. Once Muddy's established (with such hits as "Rollin' Stone," which lures the Rolling Stones to Chess Records to meet an idol), Leonard gets Little Walter a #1 hit with "Jukebox," but Little Walter can't handle success, succumbing to drugs and alcohol. Chess was smart enough to change with the times, signing Chuck Berry as rock 'n roll not only exploded, but crossed over to white audiences. Wanting a woman artist on his roster, Chess signed Etta James (Beyoncé Knowles, "Dreamgirls"), the woman who he took a very personal interest in and whose troubled background led her down the smack path. Since winning his Oscar, Adrien Brody has been bumping along from one odd project to this next, but his Leonard Chess is the most appealing character he's played since. Brody convinces of his attachment to Blues and the Black community, and later, his conflict between his marriage and his feelings and protectiveness toward Etta. Considering the film's title, though, Martin soft pedals any conflicts between Chess and his artists. Waters is portrayed as always going begging to Chess, having amassed no fortune of his own, but none of the others seem wanting. We do see a quick cooking of the books to siphon off some of Berry's royalites to the needier Waters. Jeffrey Wright plays Waters with a padded, stiff lower lip, akin to Brando's Godfather, and captures the essence of the man and his music. He's a great actor in a good part. As Waters' competition, Eamonn Walker ("Tears of the Sun," "Duma") is dynamic and intimidating, his Howlin' Wolf a force of in the dark woods nature. Adding star power is Knowles, doing her Diana Ross best as the fragile James. Mos Def is a bit slight as Berry, playing the man as a soft-spoken lark. Union is the earth mother of the piece, the woman faithful always to Waters despite his cheating and the adoration of Little Walter. "Cadillac Records" is a showcase for its artists and a loving tribute to the man who made it all possible (the ending embellishes the truth, Hollywood style, before moving onto a lovely Muddy Waters coda). It has its share of tragedy, but the liberal does of comedic anecdotes ensure a fun ride.