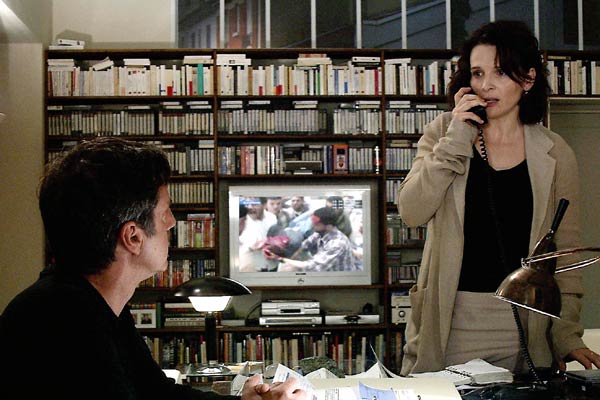 Georges Laurent (Daniel Auteuil, "The Closet," "Après vous...") is the successful television host of a popular Parisian literary show. He has a nice inner city home, drives a nice car and enjoys a nice life with his wife Anne (Juliette Binoche, "Bee Season"), who works in publishing, and their teenaged son Pierrot (Lester Makedonsky) who is beginning to make his mark in competitive swimming. But the Laurent family is thrust into an ordeal that threatens its very existence when videotapes begin to arrive which show them under surveillance and the perpetrator remains "Caché (Hidden)."

Writer/director Michael Haneke ("The Piano Teacher," "The Time of the Wolf") delivers his most stunning work to date with this insidious thriller about race and privilege and the black secrets carried by those we least suspect. Daniel Auteuil is phenomenal as a man who has spent his life trying to ignore his own guilt and Binoche is striking as the wife who is horrified to discover she may not really know the man she's married to. "Caché" is without a doubt the most provocative movie of the year. The first tape is found in a plastic grocery bag and simply shows hours of the front of the Laurent's house, but the next comes wrapped in a child-like drawing of a figure with blood spewing from its mouth. Haneke gives us a quick cut of a child looking out from a darkened room, almost as if he's looking into the room where George and Anne will view the tape, but the child isn't Pierrot. When the Laurents host a dinner party, Anne's boss Pierre (Daniel Duval, "The Time of the Wolf") tells a vaguely creepy, but funny joke about his resemblance to a dog and a date comes up - 1964 - which points to a time of French political conflict important to this story. The doorbell rings, announcing the arrival of yet another tape and George seems unduly annoyed when Anne tells their guests what has been going on. George pops the tape in the VCR, but this one is different - it shows the view behind the wheel of a travelling car that stops outside the gate of a country estate - George's childhood home as it turns out. And it is from this point that we know George is hiding something, but what? He visits his mother (Annie Girardot, "The Piano Teacher") and although he appears to have a good relationship with her, it has been so long since he has spoken to her he is unaware that she now requires home care. He asks if she remembers a young boy, Majid, whose father worked for them when he was six, but she draws away from the subject, even as she relates that his aunt has written to tell her how proud she must be of George's success. There is something unspoken between these two, something each had thought successfully buried, and Haneke's brilliant direction and the fine actors convey much while saying little. When George returns home, he finally admits to Anne that he thinks he may know who is sending the tapes, but he refuses to tell her who and his excuses for not doing so are weak. Anne goes into a tailspin and cries onto Pierre's shoulder about the shaky ground her marriage is on. The tapes keep coming, the subject matter turning darker, and George, refusing to accept responsibility for prior actions, repeats the behavior that started the cycle, adding insult upon injury. The final results are shattering and Haneke makes the impact on the audience as shocking as it is upon George. The director has explored societal issues before in such films as "Funny Games," "Code Unknown" and "The Time of the Wolf," and he has also used video as a psychological tool in the early "Benny's Video," but never before has he so skillfully made a statement. At first, Haneke inserts the video into his film so that we do not know we are watching a recording until the tape is paused, then he begins to repeat the live action after we've seen the tape and then we begin to see the action as it happens followed by the taped replay. Gradually, he's made his passive protagonist active, a man who has hidden his shame unwittingly working towards his own condemnation. Even though it may not be initially apparent, everything in this film, from the walls of books which line the Laurents' dining room to a street incident that turns into name calling, is working towards its theme. George's casual reference to an apartment as 'low rent' carries the subtlest hint of disdain and his editing of one of his shows, where his guests discuss the censorship employed by Rimbaud's sister, is a circular irony that exposes his own intellectual pretension. Auteuil, a great actor, is so good inside George's twitchy skin that the performance itself is invisible. Auteuil is not afraid to leave us with the portrait of an ugly man, self pitying til the last. Binoche, who just played a wife driven to madness by her husband's self possession in "Bee Season," is much more fiery and real here. There is no sentiment with this married couple, just the comfortable chemistry of two people used to a shared existence. As Auteuil makes us feel George's mounting stress and panic, Haneke builds a chilling suspense (the film is brilliantly edited by Michael Hudecek and Nadine Muse ("The Piano Teacher," "Look at Me")), yet you may not notice that he leaves one big question left deliciously, tantalizingly unanswered. Then he throws his last shot at us, so casually loaded with implication. Could a man's conscience take on a life of its own? "Caché" is Michael Haneke's masterpiece.