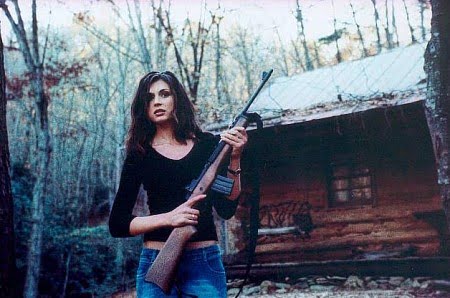 A group of five college chums rent a cabin in the North Carolina woods for a week's vacation, but after a run in with a hermit (Arie Verveen, "Caught") suffering from a flesh-eating virus, they'll discover a whole new meaning for the phrase "Cabin Fever."

Producer/director/cowriter (with Randy Pearlstein) Eli Roth has transformed his love of late 70's horror films into a gut-wrenching bloodbath where the survival instinct brings out some character traits better left hidden. While "Cabin Fever" doesn't reach the heights of woods set horror flicks "The Evil Dead" or "The Blair Witch Project," it has enough quirky humor and hardcore splatter to attain a lasting cult status. Meek nice guy Paul (Rider Strong, TV's "Boy Meets World") is hoping to take his long term friendship with pretty Karen (Jordan Ladd, "Super Troopers") into new territory. Couple Jeff (Joey Kern, "Super Troopers") and Marcy (Cerina Vincent, "Not Another Teen Movie") plan on lots of sexual activity. Odd man out Bert (James DeBello, "SwimFan") seems content with the idea of being childish and annoying while shooting small animals. They get their first taste of weirdness at a country store when one of them is bitten by Dennis (Matthew Helms), a long-haired blond wild child who sits on a porch swing, and proprietor Old Man Caldwell (Robert Harris, a 72-year old hoot in his screen debut) informs them that a new rifle is 'for the niggers' (this sets up a great joke at film's end). At the cabin, Bert wanders off and shoots at a hedgehog that turns out to be the virulent hermit we've seen sprayed with his dog's infected blood at film's opening. Bert promises help, then forgets to mention the guy to his buds. When the hermit shows up at their cabin, the quintet panics, attacking the man with baseball bats and knives when he attempts to use their truck. Their savagery gives them pause, and us a laugh when Karen sums up 'He asked for our help and we set him on fire.' Unbeknownst to them, the flaming hermit has died dousing himself in the local reservoir and soon enough Karen is drinking copious amounts of tap water. Roth gleefully indulges a sick sense of humor within his surprisingly aesthetic film. Cinematographer Scott Kevan's widescreen lensing places his subjects in doomed perspectives where the sky washes into a blood red tint for premonitions and flashbacks. Sound supervisor Brian Best pushes buttons, particularly with a juicy sex scene that goes nastily bad. Composer Nathan Barr's score is way above average for this type of flick and is nicely complemented by three thematic pieces by Angelo Badalamenti (David Lynch's composer). Makeup effects by K.N.B. ("Evil Dead 2") were declared accurate by victims of the real flesh eating viruses narcotizing fasciitis and fotobacterum damsela and they reach their apex with the demise of a heroine that begins with a leg-shaving scene and ends outside minutes later in such a trail of gore we're left thankful it was mostly off screen. Cast standouts include the impossibly obnoxious DeBello who turns sympathetic when his chips are down, Giuseppe Andrews ("Detroit Rock City") as Deputy Winston, a cop whose only concern is the next party and Harris as the enervated country store owner. David Kaufbird makes a strong impression in a small role as a stoner who visits the group's campfire. Roth ends his film with a tribute to "Night of the Living Dead," which, frankly, is a large letdown, but he rebounds with some last minute yuks. The guy who may make the line 'Pancakes!' one of the most unlikely catch phrases of the year will definitely be one to watch.