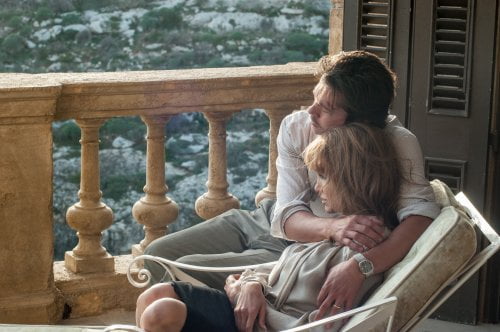 When they were first married, writer Roland Betrand (Brad Pitt) and his dancer wife Vanessa (Angelina Jolie) were the 'toast of New York.' Now, fourteen years later, the couple has traveled to the southern coast of France where Roland hopes to find inspiration for a new novel and heal a marriage overcome by grief "By the Sea."

As we listen to Jane Birkin sing 'Jane B.,' setting the time, place and mood, we see a beautiful couple in beautiful clothes driving in a Citroen convertible through switchbacks to a remote luxury hotel. Writer/director Angelina Jolie ("In the Land of Blood and Honey," "Unbroken") has made a gorgeous film, all blondes and blues shot by cinematographer Christian Berger ("The White Ribbon") using a reflective natural light system. Jolie and Pitt dig deep, often wordlessly communicating the deep love which can still prevail as a marriage is crumbling. If only a central device of the film weren't so problematic or its conclusion so overwrought, "By the Sea" might have been one of the great films about marriage. As it stands, it is still a daring, provocative paean to European cinema of the 60's and 70's, a much worthier followup to Jolie's first film than her flat commercial film "Unbroken." The first thing the couple do after entering their seaside room is move its desk in front of the balcony window, Roland unpacking his typewriter. It's one of the last things the couple do together for quite some time. He spends his days with his empty notebook, drinking in the hotel cafe. She mopes, shops and wanders the seaside cliffs, contemplating the crashing waves in a way that suggests they may be the solution to her depression. Things get altogether more interesting when a newlywed couple unguarded in their enthusiasm to conceive move into the room next door, especially when Vanessa discovers a peephole beneath a console which allows her to watch them (this is the problematic device, as the couple should be able to hear Roland and Vanessa as easily as they themselves are heard). François (Melvil Poupaud, "44 Inch Chest," "Laurence Anyways") introduces himself to Vanessa from his adjoining balcony and she meets his young and pretty wife Lea (Mélanie Laurent, "Inglourious Basterds") shopping in the town. Vanessa insists that Roland wants Lea, which he denies. He yearns for her but treats her with kid gloves (symbolically represented by the way he turns over the sunglasses she carelessly leaves face down). She spurns his drunken advances. Roland becomes quite friendly with cafe owner Michel (Niels Arestrup, "A Prophet," "War Horse"), the old widower sensing and gently advising on the couple's problems. Vanessa's destructive depression, though, continues unabated - something must break before it can be mended. Although written before her first film, "By the Sea" can be seen as Jolie's personal reflection on a loss of womanhood after her double mastectomy. She appears nude in the film, reportedly anxious over exposing her reconstructed breasts. She needn't have worried as she's never looked more ravishing than she does here. This is also the softest and most fragile we've ever seen the actress in a role, complemented by outstanding, Yves Saint Laurent inspired costuming by Ellen Mirojnick ("Failure to Launch," Cinemax's 'The Knick'). Pitt, resembling Clark Gable with his moustache and gallantry, is moving and tender, frustrated in his inability to break through his wife's wall of depression. The two's bathtub sex scene is true communion. Pitt's also terrific in his scenes with Arestrup, giving the older actor the stage which Arestrup quietly commands. As a screenwriter, Jolie understands the value of silence, yet she tips the scales too heavily in her last act, her own character's near hysteria overly dramatic. Yet the late summer journey lingers, the production so in tune with its story, you may want to go home and throw on some Gainsbourg and Aznavour tunes. Grade: