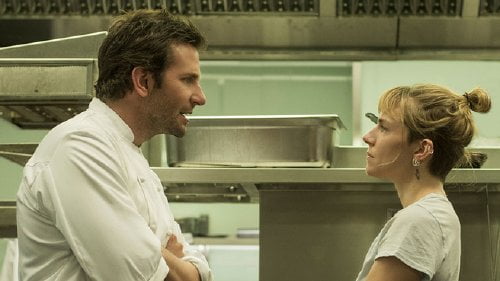 Adam Jones (Bradley Cooper) was once the star chef on the Paris restaurant scene until, that is, he blew it all on booze, drugs, women and his inflated ego. He has put his demons behind him, abstaining from his vices for over two years and is ready to get back in the Michelin-rated chef game in “Burnt.” Adam has a volatile temper and expects perfection in his kitchen, not just for himself but for everyone who works in his restaurant, too. His past bad behavior cost him his prestigious job and his friendship with Tony (Daniel Bruhl). Tony’s father owns a hotel and, more importantly, a restaurant in London and Adam’s plan is to take over the eatery and get his third Michelin star. Adam’s is the story of a man seeking redemption for his past, destructive foibles. When he blew his dream career, he vowed to get back to basics. For his penance, he has to shuck 1000000 oysters – and does it. His return to London brings mixed feelings from those around him, both friends and rivals, mainly because of Adam’s obsessive-compulsive behavior. This behavior is what drives the drama in “Burnt” as Jones uses and abuses those around him to get his precious third star. Bradley Cooper does a solid job portraying the volatile character of Adam Jones, whose drive for perfection is self-destruction, unless he can change his ways. Sienna Miller, that chameleon of actors, is once again in top form as Adam’s sous chef and potential romantic interest, Helene – if he does not revert to his old ways. Daniel Bruhl is sympathetic up as Tony, who has always been secretly in love with his friend. The rest of the ensemble includes Omar Sy, who harbors a secret grudge against Adam, Emma Thompson, as Jones’s monitor/mentor, Dr. Rosshilde, and Matthew Rhys as his rival restaurateur, Reese. The real draw to “Burnt” is the food imagery, from the details of food preparation to the presented finished dishes. Real chefs play many of the kitchen staff and lend the film an accurately staged believability. These montage scenes reminded me of the care taken by the femme chef in “Babette’s Feast” but without the angst caused by Chef Adam’s frequent temper tantrums, in and out of the kitchen. The combination of Adam’s journey to redemption, and his third Michelin star, and the food he presents make “Burnt” a foodie movie delight. Director John Wells keeps the film moving at an even pace with the story by Michael Kalesniko and screenplay by Steven telling Adam’s tale in conventional but entertaining ways. Fans of “Top Chef” or reruns of Julia Child’s “French Chef” will be drawn to “Burnt” but, because of the well-told story, others will enjoy it, too.