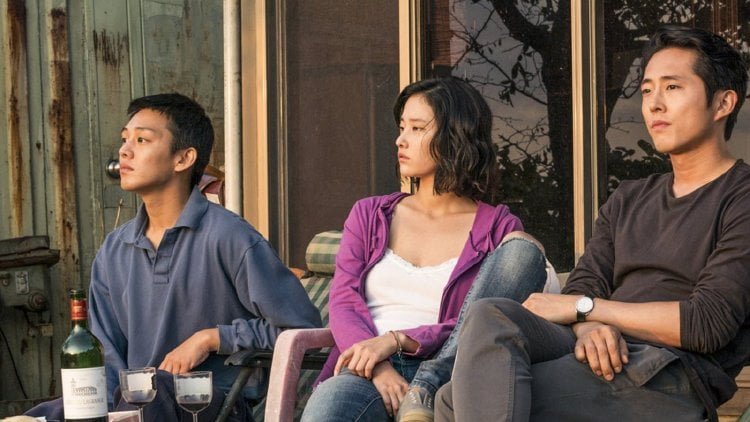 Jong-su (Ah-in Yoo) is a college graduate but can only find part time work in bustling Seoul. While making a delivery, he meets a girl he knew when a teen, Hae-mi (Jong-seo Jeon), and they go out for a drink. She asks him to do her a favor – feed her cat while she travels to Africa. She then returns and introduces Jong-su to her mysterious new friend, Ben (Steven Yeun), in “Burning.”

Lee Jong-su (Ah-In Yoo, "The Throne") is eking out an existence when he runs into Shin Hae-mi (Jong-seo Jeon) running a street raffle in front of a Seoul department store. Hae-mi reminds him that they know each other from their youth in the same provincial province and they fall into a relationship. When Hae-mi takes a trip to Africa, she asks Jong-su to care for her cat, one which he never sees in her one cramped room. When he picks her up from the airport, though, she has a new man in tow, the wealthy and inscrutable Ben ('The Walking Dead's' Steven Yeun) and it sets Jong-su to "Burning." Cowriter (with Oh Jungmi)/director Lee Chang-dong has taken Haruki Murakami's short story 'Barn Burning' and layered it with class envy, jealousy, generational guilt and the mysteries of what we cannot see. South Korea's submission for the Foreign Language Oscar is a slow burn that sneaks up on you, packing quite a punch in its final moments. This is the type of film that lingers, revealing more the longer it is reflected upon. It also provides a real breakthrough for Yeun, who in one monologue bears eerie resemblance to Joseph Cotten in "Shadow of a Doubt." Hae-mi demonstrates her passion for mime by peeling and eating an imaginary tangerine for the delighted Jong-su, telling him that it requires no particular talent, just the willingness to forget the tangerine is not there. When she takes him to her one room abode, she notes that it gets sunshine just once in the afternoon, reflected off the Seoul Tower. They make love, that light hitting Jong-su's face. Then she's gone, off to see the Kalihari bushmen whose concepts of Little Hunger and Great Hunger fascinate her. Jong-su feeds her cat daily, only believing it exists by the absence of the food when he returns. He masturbates at her window, gazing up at the tower. It is a mystery why Hae-mi's asked Jong-su to come to the airport as he doesn't even end up taking her home, something Ben does after another man drops off his silver Porsche at the restaurant where they've stopped, Hae-mi's voracious appetite demanding tripe, her 'Little Hunger.' When the aspiring writer asks Ben what he does, Ben smiles slyly, replying that he 'plays.' There is another odd admission after Hae-mi describes the powerful emotion she felt watching an African sunset, Ben stating that he cannot recall ever shedding a tear. When she falls asleep, Ben's affectionate remark that she can fall asleep anywhere implies a deeper knowledge of Hae-mi than Jong-su's. Alone, Jong-su has moved into his family's ramshackle farm near the North Korean border, his father, known for his bad temper, recently jailed. He struggles with his familial duty, drafting a court petition his neighbors are reluctant to sign. And he continues to hear from Hae-mi. Invited to Ben's, he's astonished by the young man's fashionable and spacious Gangnam apartment, wondering how it is that some people can 'cook pasta while listening to music.' On his way to the bathroom, he snoops, finding a drawer full of female trinkets. Their last get together is the strangest, Hae-mi calling to say she and Ben are in his neighborhood wishing to drop by. The eat and drink and Ben rolls a joint. Hae-mi strips off her top, extending her arms to the sunset, dancing her own Great Hunger in search of the meaning of life. Ben confides to Jong-su that he burns down greenhouses, noting that one every two months or so is 'about the right pace,' and that he's found one close by. After they leave, Jong-su begins a running route, checking out every neighboring greenhouse. He no longer hears from Hae-mi, but runs into Ben. When he asks about the greenhouse, Ben tells him he went ahead and burned it shortly after their visit and that perhaps Jong-su didn't notice because we often fail to see what is too close to us. Ben is keeping company with another woman. On a final visit to Ben's apartment, Jong-su notes two new additions, their implications alarming. It is remarkable how many layers Lee and Oh have found in a short story than can be read in under ten minutes. Jong-su may appear easy going, but he, like the story, is on a slow burning path, his desires stunted at every turn, the ramifications of his country's history on its people blaring from loudspeakers beyond the border. In contrast, Ben seems to want nothing but have everything while in between is an unknowable woman - innocent searcher or gold digger? - seeking higher meaning and delighting in the everyday. They have added little in the way of plot to Murakami's Japanese set story other than' turning its protagonist from a married writer into the more downtrodden Jong-su, his paternal problems reflected in Faulkner's short story of the same name (Jong-su claims Faulkner as his favorite writer). "Burning" extends its theme of things that are not seen to the unknowability of other people. We may deem Hae-mi a free spirit, but the two men she's linked never address the conundrum she's created, Ben maintaining an air of nonchalance, Jong-su struggling to do the same. The woman who stretches her arms towards a setting sun sets off sparks between them. Grade:

Director Chang-dong Lee created, in 2002, a film that has stayed with me since I saw it way back then, “Oasis (2002).” I will not say anything about that beautiful love story, except to recommend that you see it. “Burning” does not have the same impact for me, but Lee shows that he has a fine talent for subtle, intelligent mystery that keeps you interested and guessing throughout. When Hae-mi returns with the outwardly wealthy Ben in tow. Jong-su is conflicted by his presence. Jong-su has, in the young woman’s absence, developed a serious crush on Haemi and his jealousy grows against Ben. Then, Hae-mi disappears. It takes a while in the film but her vanishing begins Jong-su's quest to find his love and solve the mystery. The short story by Haruki Murakami, Barn Burning, provides the sketchy framework – the title tells it all – for a much more complex story by the director-writer and Jung-mi Oh. The characters are equal to the mystery that unfolds with Jong-su the love-smitten hero who has to unravel the enigma of Hae-mi and the ambiguity of Ben, his wealth and his motives. The title refers to Ben’s penchant for burning down abandoned greenhouses (“barns” in the short story) which sparks an obsession in Jong-su that is just part of the mystery. The tiny cast of three represents a trio of very different personalities with Jong-su the naïf, Hae-mi the focus of his interest and Ben the catalyst that changes our hero Jong-su. Do not expect substantive answers to the questions that “Burning” raises in your mind. But, for two hours you lose yourself in the mystery tale.