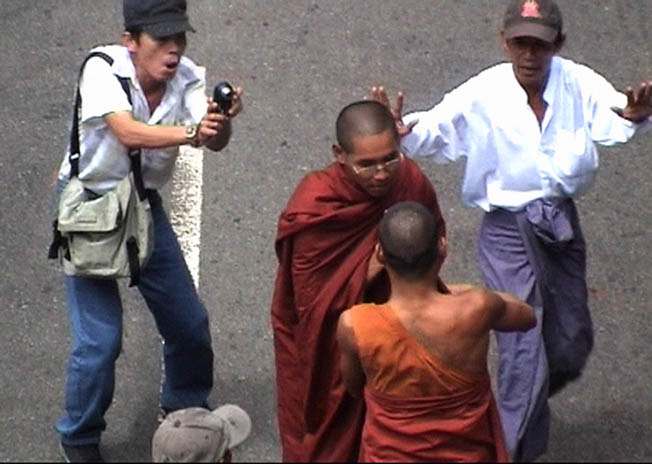 Foreign journalists are not allowed into the country of Burma whose citizens are denied basic human rights by the military generals who keep a stranglehold on the country. In 2007, when the price of fuel rose sharply, severely impacting the lives of all, protest broke out for the first time in twenty years. The Democratic Voice of Burma, a group of undercover video journalists who capture video of what is happening in their country and then smuggle the footage out under threat of imprisonment and torture, were there to record this extraordinary uprising, made all the more momentous when thousands of usually apolitical Buddhist monks took up the cause. Danish documentarian Anders Østergaard combines their footage with some of his own restagings to tell the story of the "Burma VJ."

This trenchant piece of work might sound on the surface like watching a CNN broadcast in a movie theater, but Østergaard has formed his film like a political thriller and the bravery of both the journalists he hangs the story on and the protestors and monks themselves is both astonishing and moving. The Danish director has been criticized for restaging scenes, but all he has done is providing bridging pieces which explain how the DVB is able to operate through the voice and actions of one twenty-seven year old VJ, Joshua, whose face we never see but who we nonetheless get to know and admire. Originally Joshua was to be the focus of the film, but the 2007 Saffron Revolution happened as the film was being made. All of the footage of this incredible event was shot by the DVB. In voiceover, Joshua explains how he remembers the hopefulness of 1988 as a small child, when Daw Aung San Suu Kyi, the daughter of assassinated independence hero General Aung San, led the National League of Democracy to victory after the Burmese protested military rule. She never got to lead the country, however. Instead she was arrested and has been kept in her home under heavy guard. We see the inside of Joshua's bag, which is how he must shoot his small Sony video camera, and we see the fear and suspicion of ordinary citizens who are afraid to speak out lest Joshua turn out to be military intelligence. One of Joshua's colleagues, Ko Maung, continues to work for the DVB after spending twelve years in prison. When the uprising begins to happen, and especially when the monks come out in force, Joshua is amazed to see their video being broadcast on the BBC and CNN (the footage is smuggled to Norway where it is rebroadcast back into Burma; journalists take time out in Thailand to avoid becoming too hot and maintain communications via computer chat and cell phone). As hope rises, the monks go to visit Aung San Suu Kyi and, incredibly, a general allows her to come out of her house to speak with them. Then things take a turn. Gatherings of more than five are expressly outlawed and curfews are enforced. People continue to gather, as do the monks. Then the unthinkable happens - the military turns on the monks themselves, ripping their robes are they are herded into trucks, beating them. Shots are fired into crowds and a Japanese journalist, Kenji Nagai, is killed at point blank range (his murder is caught on tape and broadcast throughout the world). A VJ discovers the corpse of a beaten monk in a river and his video images evoke a helpless rage and deep-seated sorrow. Østergaard and his editors pack a lot of emotional punch in retelling this story, from the incredible highs of the people making themselves heard to the devastation when they are quashed. There is a chilling moment near the end, when Joshua calls Ko Maung's cell phone. It is answered, but no one says anything. Still, the Democratic Voice of Burma have been heard globally and their numbers grow. "Burma VJ" is the very face of bravery in the face of oppression and Østergaard's work gives these journalists another outlet and their own spotlight. It is an incredible story, well told, through a most distinguished media voice.