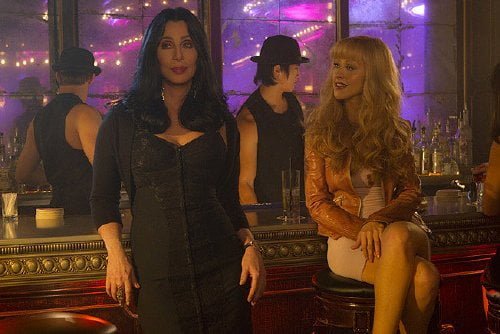 With no family to hold her down, Ali (Christina Aguilera) leaves her Iowa waitressing job to follow her show biz dream in L.A. She gets a job as a cocktail waitress in a lounge with an amazing musical show, but makes it her goal to get onto its stage to perform "Burlesque."

Writer/director Steve Antin takes a little bit of "Cabaret" and a whole lot of "Showgirls," nices them up and comes up with any excuse for a song and dance or a Cher ballad to distract his audience from his silly, implausible plot. Cher gets to be a den mother, fag hag and performer all in one. Aguilera wears outrageous costumes and is gifted with shoes that look like they ran away from the Macy's Thanksgiving Day Parade. Gay men everywhere will rejoice. Tess (Cher), whose club boasts 'The Best View on Sunset Strip - without windows,' is being pushed by her ex Vince (Peter Gallagher, "Conviction") to sell before they lose the business anyway, but Tess is determined to keep her family intact. When Ali shows up and just begins bussing tables, Tess, a true pushover, rolls her eyes and lets her stay. When Ali's hotel room is robbed, handsome bartender Jack (Cam Gigandet, "Twilight," "Easy A"), whose fiancee is performing in New York, invites her in. The club's main diva, Nikki (Kristen Bell, "You Again"), is the only one not enchanted by Ali because Ali had the sense to call her on day one. Antin makes Tess appear unwilling to believe Ali may have the talent to perform on the stage (just like that fiancee of Jack's is an unseen obstacle), but one audition later and she's sharing makeup secrets (it's like painting, except you're painting a face!). When Tess discovers Nikki drinking, she insists Ali take her place. Evil Nikki pulls the plug on the classic music the girls have been lip syncing to to embarrass her replacement, but she's handed the girl her moment on a platter - Ali performs live and brings down the house. Tess's club may be saved yet! Of course, there's Marcus (Eric Dane, "Marley & Me"), the uber rich real estate developer/ music producer (?) who's at Tess's every night and begins sniffing around Ali. Marcus makes an offer to buy the club, but we find out his intentions are not what they at first seem. Sean (Stanley Tucci, "Easy A"), Tess's gay costumer and pseudo life partner, informs Jack that he better move fast if he wants to hang onto his obvious soul mate. Antin rewards Ali's on stage triumph by...having the other girls invite her out to eat! He honors Jack's do-gooder instincts by...having Ali insist on taking his bedroom over the couch! He recompenses Alan Cumming's performance as Broadway's Master of Ceremonies in "Cabaret," by casting him as Alexis, the heavily eye-linered Master of Ceremonies at Tess's club! After a tough night working that's yet to end even though the club's closed, Tess is manipulated into doing a run through of her new song, because it's time to tell us we haven't seen the last of her! He does know how to stage a musical number, though, even if the segue is far fetched. Cher's in good voice and the sixty-four year-old, while sculpted of face, still looks great. It's impossible to tell if Aguilera can act given the circumstances here, but she sure can belt out a tune. A real burlesque number, performed in nothing but strands of pearls with Moet and feather fans as props, is a knock out. Even if most of the numbers are Fosse lite, Rob Marshall ("Chicago," "Nine") should be looking over his shoulder. "Burlesque" is little else but eye and ear candy held together by a 'let's put on a show!' plot outline, but unlike Marshall's last film, it's not a chore to sit through. This is the kind of movie the term 'guilty pleasure' was made for.