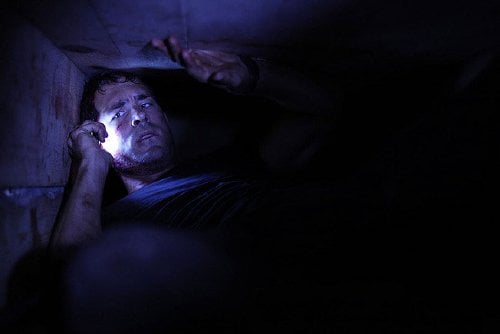 Paul Conroy (Ryan Reynolds, "The Proposal") has a dangerous job as a civilian truck driver working for a contractor in Iraq. After undergoing a horrific ambush, Paul comes to and comes to realize he's in a very serious situation. He's been "Buried."

Spanish director/editor Rodrigo Cortés takes the high concept idea written by Chris Sparling and tries every which way to keep it well paced and visually interesting, but despite his filmmaking ingenuity, "Buried" plays like a Twilight Zone episode padded out to feature length. In trying to keep things moving, Sparling throws in too many different scenarios that strain credulity and in making his bid for Indie cred, Reynolds gives a solid if unremarkable performance. Cortés does remain faithful to keeping his audience with Paul all the way, never leaving the confines of the coffin, and so he keeps us in total darkness as Paul comes to. A Zippo provides light and Paul goes through the usual checklist of what one does discovering one's been buried alive - panic, hyperventilation, pushing against the lid, screaming for help. After a while Paul realizes he needs to calm down and think. He never really calms (we discover later that on top of everything, Paul suffers from anxiety attacks), but he does discover that there's a cell phone buried with him, albeit one with an Arabic display. After discovering that the 'safety number' given to him by his employer is no longer in his wallet, Paul begins to make a series of phone calls to the U.S., beginning with 911, his home, his wife's cell phone and the F.B.I. Cortés and cinematographer Eduard Grau ("A Single Man"), the heavy lifter here, use all kinds of tricks. The camera stationary at Paul's feet, travelling around with the lighter, surreal overhead shots where coffin lid and dirt are replaced with tunneling, trapezoidal casket sides. Light shifts from the yellow of the Zippo flame to the blue of the cell phone's display. But in trying to keep the pace moving along, Sparling's script throws in questionable elements. I don't care how strained a relationship Paul may have with his wife's friend, there are very few people who would respond peevishly to a distressed call from Iraq. And she's not the only one - many of the bureaucrats Paul gets through to are the opposite of peeved, they're almost disinterested. Why should Paul have to do this much cajoling on the phone to get a response? Because the screenplay demands it and that's all. The use of the Iraq war may provide a modern arena for Paul's horror, but there's something cynical about it as well. The final action of his contractor's HR guy (voice of Stephen Tobolowsky) is just too beyond the pale. The technology must also be questioned. Not only would cell phone reception be an issue, but the amount of video content going back and forth boggles the mind. At least they pay attention to battery life. There's also one outside element that enters Paul's environment which is eye-rolling kitsch. And despite the ingenuity of the cinematography, the height dimensions of the coffin seem to shift to serve the shot. The film ends with a Serlingesque 'twist' that is timed to the unlikely millisecond. "Buried" is sure to effective for anyone suffering from claustrophobia, but it's a hit and miss affair overall.