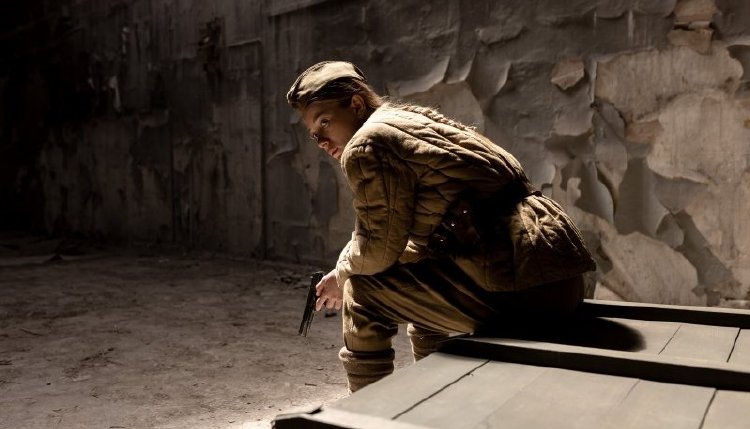 It’s Christmastime in London.  Anna (Harriet Walter, HBO's 'Succession') briefly stops watching news about the fall of the Soviet Union to let her dog out, but fails to latch the door.  Confronted by a neo-Nazi (David Alexander Parker) who claims to know her true identify and the secret she has held for almost fifty years, Anna turns the tables, debilitating the man with an antique airborne drug before telling him the truth of just what happened back in 1945 in “Burial.”

Writer/director Ben Parker’s ("The Chamber," writer "Girl on the Third Floor") fictional twist on historical fact is both a solid WWII genre thriller and current day reflection on fascism’s relationship to disinformation.  Using Stalin’s real life quest to secure Hitler’s body at the end of the war while publicly stating that the Fuhrer was still alive, Parker has fashioned a taught standoff between the Russian soldiers sent to retrieve Hitler’s corpse and deliver it to Moscow and the German Werewolves behind enemy lines who wanted his death to remain secret.  It is the modern day neo-Nazi’s belief in 1991 that Hitler escaped and Anna was a Russian Lieutenant who has evidence of this fact.

And indeed, in 1945 Anna was Lt. Brana Vasilyeva (Charlotte Vega, 2021's "Wrong Turn"), a soldier uncommonly dedicated to her mission.  Unfortunately for her, when the going gets tough in rural Poland, Captain Vadim Ilyasov’s (Dan Skinner, "High-Rise") focus turns to the ‘spoils of war,’ something which makes their squad vulnerable to the Werewolves patrolling local forests.

The German troops don both wolf heads and gas masks, the better to avoid the hallucinogenic smoke from the burning packets they use to disorient their enemy (the Russians’ drugged, nightmarish point of view is really the only horror element here, excepting Hitler’s corpse itself, this being an unusual entry for the IFC Midnight label).

The Russians find they must travel over land with the coffin-sized crate of unknown contents (Brana knows what is inside, having entered Hitler’s bunker and enduring nightmares of a blood splattered cement wall and prone Eva Braun ever since).  Every night when they make camp, they have been tasked with burying the crate so that it will remain hidden should they perish.

After several arduous days on the road, once in Polish forests, Ilyasov marches off with a couple of men in search of the local town, demanding local Justyna (Ester Kuntu, "Firebird") open the tavern where the men begin to drink heavily.  One can guess what will happen to Justyna, who runs off into the woods, but the men will be surprised by Werewolves.  Meanwhile, back at camp, Brana’s ally Tor (Barry Ward, "Jimmy's Hall") goes off in search of the others, only to meet up with the traumatized barmaid.  Another Pole, Gaunt (Tom Felton, "Harry Potter's" Draco Malfoy), who was forced to serve in the German Army, is sympathetic to Brana, finding she and her cargo a hiding place with distrustful Polish farmers.  Leading the Werewolves is the SS’s Wölfram Graeber (Kristjan Ukskula), armed with medical torture devices and filmmaking equipment for propaganda production.

The film, shot on location in Estonia, has an authentic look and is well cast across its political spectrums, Vega a committed early stand-in for the hardened Walter, Ward the sympathetic martyr.  Special effects artists have created an eerily repellant corpse complete with formaldehyde ‘feeding’ tube.  Action is well staged with plenty of pyrotechnics.  A memento mori traverses the decades, a gruesome reminder of lives lost in service of a dead body and a lie.

At the very end of WWII, Soviet political officer Brana Vasilyeva (Charlotte Vega) is sent on a special mission – bring the remains of the most evil man on earth from Berlin to Moscow and into Stalin’s hands in “Burial.”

I have been a dedicated student of history, especially WW2 history, my entire adult life. But, I also like the myths generated by that war, like Adolph Hitler was alive and well after the war and living it Argentina. One of my favorite tall tales is of Stalin’s obsession to capture the Fuhrer alive and display him like a zoo animal in the Kremlin.

Sophomore feature writer-director Ben Parker takes the Stalin-obsession myth and brings us to the last days of the war. Brana leads the secret mission and is entrusted with a large crate. Her orders are to deliver it to Stalin personally but, every night during the long journey, she and her command are under orders to bury the box in a hidden place and dig it up the next day to continue their trek.

The mission seems straightforward enough – just traverse the dangers of war torn Europe and deliver the body of “you know who” to Uncle Joe. (For some reason, the identity is kept a secret until later on the story, though it was obvious to me.) But, there is another, far more dangerous risk to the operation – the Nazi Werewolf resistance fighters who want the body back, disprove Der Fuhrer is dead and continue the war.

The deadly cat and mouse game steadily ramps up as the Soviet fighters face increasingly dangerous odds as their numbers are decimated and the Werewolves close in to take the special propaganda prize. The filmmakers ramp up the tension well as the hunters and the hunted often trade roles and firepower.

The “what if” nature of “Burial” is intriguing for the history buff and the filmmakers tell their story well, with no waste in the telling. I love a good war story and “Burial” delivers a truly unique one.

IFC Midnight opens “Burial” in theaters and everywhere you rent movies on 9/2/22.